Did nature heal during the pandemic 'anthropause'?

The pandemic was, and remains a global human tragedy. But for ecologists, it has also been an unparalleled opportunity to learn more about how people affect the natural world by documenting what happened when we abruptly stepped back from it 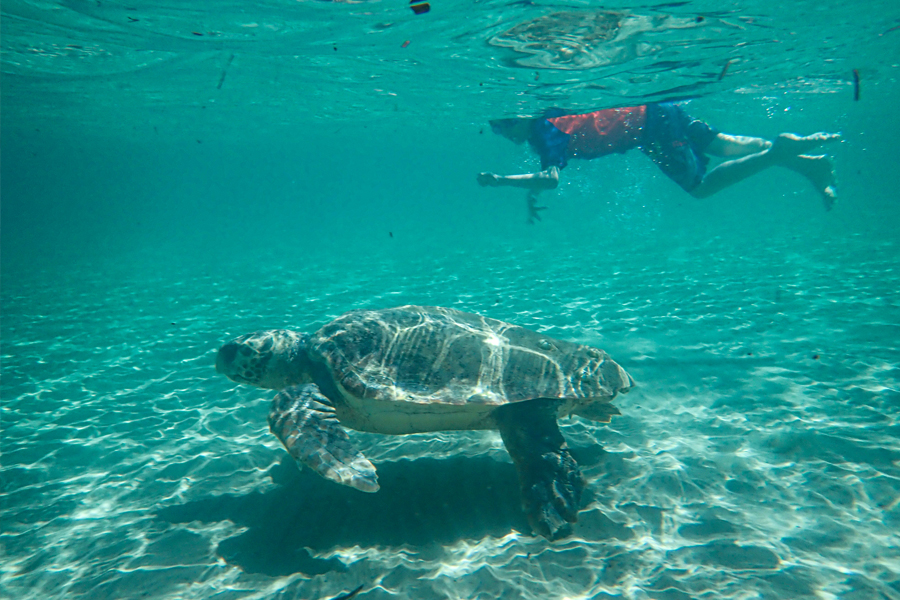 An undated photo provided Gail Schofield shows people swimming with sea turtles off the coast of the Greek island of Zakynthos. COVID-19 precautions created a global slowdown in human activity — and an opportunity to learn more about the complex ways we affect other species. (Gail Schofield via The New York Times)

In a typical spring, breeding seabirds — and human seabird-watchers — flock to Stora Karlsö, an island off the coast of Sweden.

But in 2020, the COVID-19 pandemic canceled the tourist season, reducing human presence on the island by more than 90%. With people out of the picture, white-tailed eagles moved in, becoming much more abundant than usual, researchers found.

That might seem like a tidy parable about how nature recovers when people disappear from the landscape — if not for the fact that ecosystems are complex. The newly numerous eagles repeatedly soared past the cliffs where a protected population of common murres laid its eggs, flushing the smaller birds from their ledges.

In the commotion, some eggs tumbled from the cliffs; others were snatched by predators while the murres were away. The murres’ breeding performance dropped 26%, Jonas Hentati-Sundberg, a marine ecologist at the Swedish University of Agricultural Sciences, found. “They were flying out in panic, and they lost their eggs,” he said.

The pandemic was, and remains, a global human tragedy. But for ecologists, it has also been an unparalleled opportunity to learn more about how people affect the natural world by documenting what happened when we abruptly stepped back from it.

A growing body of literature paints a complex portrait of the slowdown of human activity that has become known as the “anthropause.” Some species clearly benefited from our absence, consistent with early media narratives that nature, without people bumbling about, was finally healing. But other species struggled without human protection or resources.

“Human beings are playing this dual role,” said Amanda Bates, an ocean conservation scientist at the University of Victoria in Canada. We are, she said, acting as “threats to wildlife but also being custodians for our environment.”

The research has actionable lessons for conservation, scientists say, suggesting that even modest changes in human behavior can have outsize benefits for other species. Those shifts could be especially important to consider as the human world roars back to life and summer travel surges, potentially generating an “anthropulse” of intense activity.

“A lot of people will feel like they want to catch up on holiday travel, work travel, catch up on life,” said Christian Rutz, a behavioral ecologist at the University of St Andrews who introduced the concept of an “anthropulse” in a recent paper. (He and Bates were also part of the team that coined “anthropause.”)

“Humans will and should travel and should enjoy nature,” he added. “But I think it can be quite subtle tweaks to how we do things that can still have a huge impact.”

When the pandemic hit, many human routines came to a sudden halt. On April 5, 2020 — the peak of the pandemic lockdowns — 4.4 billion people, or 57% of the planet, were under some sort of movement restriction, scientists estimated. Driving decreased by more than 40%, while air traffic declined by 75%.

These sudden shifts allowed researchers to tease apart the effects of human travel from the many other ways we shape the lives of other species.

“We know that humans impact ecosystems by changing the climate. We know that they have dramatic impacts by changing land use, like razing down habitat and building shopping malls,” said Christopher Wilmers, a wildlife ecologist at the University of California, Santa Cruz. “But this sort of strips all that away and says, ‘Oh, well, what are the impacts of human mobility itself?’”

With humans holed up in their homes — cars stuck in garages, airplanes in hangars, ships in docks — air and water quality improved in some places, scientists found. Noise pollution abated on land and under the sea. Human-disturbed habitats began to recover.

Without swimmers kicking up sediment, water clarity improved by 56%, Rodgers and her colleagues found. Fish density, biomass and diversity increased in waters that had previously been thick with snorkelers.

Indeed, scientists found that many species had moved into new habitats as pandemic lockdowns changed what ecologists have sometimes called “the landscape of fear.”

“All animals are, you know, trying not to die,” said Kaitlyn Gaynor, an ecologist at the University of British Columbia. That drive to survive prompts them to keep their distance from potential predators, including humans. “We are noisy and novel and resemble their predators — and in many cases are their predators,” Gaynor said.

For instance, the mountain lions that live in the Santa Cruz Mountains of California typically stay away from cities. But after local shelter-in-place orders took effect in 2020, the animals became more likely to select habitats near the urban edge, Wilmers and his colleagues found.

Wilmers speculated that the mountain lions were responding to changes in the urban soundscape, which might typically be filled with human chatter and the rumble of passing cars. “But as soon as those audio stimuli are gone, then the animals are, like, ‘Well, might as well go see if there’s anything to eat here,’” he said.

But the effects of human absence were nuanced, varying by species, location and time.

Multiple studies found that as traffic eased in the spring of 2020, the number of wild animals that were struck and killed by cars declined. But the number of wildlife-vehicle collisions soon crept back up, even as traffic remained below normal levels, one team of researchers reported.

“Per mile driven, there were more accidents happening during the pandemic, which we interpreted as changes in animal space use,” said Joel Abraham, a graduate student studying ecology at Princeton University and an author of the study. “Animals started using roads. And it was difficult for them to stop, even when traffic started to rebound.”

The lockdowns seemed to embolden some invasive species, increasing the daytime activity of Eastern cottontail rabbits in Italy, where their rapid expansion may threaten native hares, while disrupting efforts to control others. For instance, the pandemic delayed a long-planned project to cull giant, predatory mice from Gough Island, a critical habitat for threatened sea birds in the South Atlantic Ocean.

The mice, which likely arrived with 19th-century sailors, attack and feed on live bird chicks, often leaving large open wounds. “I nicknamed them ‘vampire mice,’” said Stephanie Martin, the environmental and conservation policy officer for Tristan da Cunha, the archipelago of which Gough Island is a part. Many chicks succumb to their injuries.

Scientists were set to begin an ambitious mouse eradication effort when the pandemic hit, delaying the project for a year. In the intervening breeding season, with the vampire mice still running rampant, not one MacGillivray’s prion chick — an endangered bird that breeds almost exclusively on Gough — survived. “We lost a whole other breeding season,” Martin said. “It meant yet another year with no fledglings.”

As people resume their normal routines, researchers will continue monitoring wildlife and ecosystems. If an ecosystem that appeared to benefit from humanity’s disappearance suffers when people come flooding back, that will provide stronger evidence of our impact.

“It’s this reversal of the experimental or semi-experimental intervention that scientifically allows really robust insights into how environmental processes work,” Rutz said.

Understanding these mechanisms can help experts design programs and policies that channel our influence more thoughtfully.

“If we then strengthen the role as custodians and then continue to regulate pressures, then we can really tilt the role of humans in the environment to an overwhelmingly positive role,” said Carlos Duarte, a marine ecologist at King Abdullah University of Science and Technology in Saudi Arabia.

When the Hanauma Bay Nature Preserve reopened in December 2020, it instituted a strict new cap on daily visitors. It is now closed two days a week, up from one before the pandemic, Rodgers said.

Other changes could pay dividends, too, experts said: Building wildlife crossings over highways could keep some animals from becoming road kill, while mandating quieter car engines and boat propellers could curb noise pollution on land and at sea.

“No one can say anymore that we can’t change the whole world in a year, because we can,” Bates said. “We did.”