The James Webb Space Telescope's first images aren't just breathtaking—they contain a wealth of scientific insights and clues that researchers are eager to pursue. Here are some of the things scientists now hope to learn 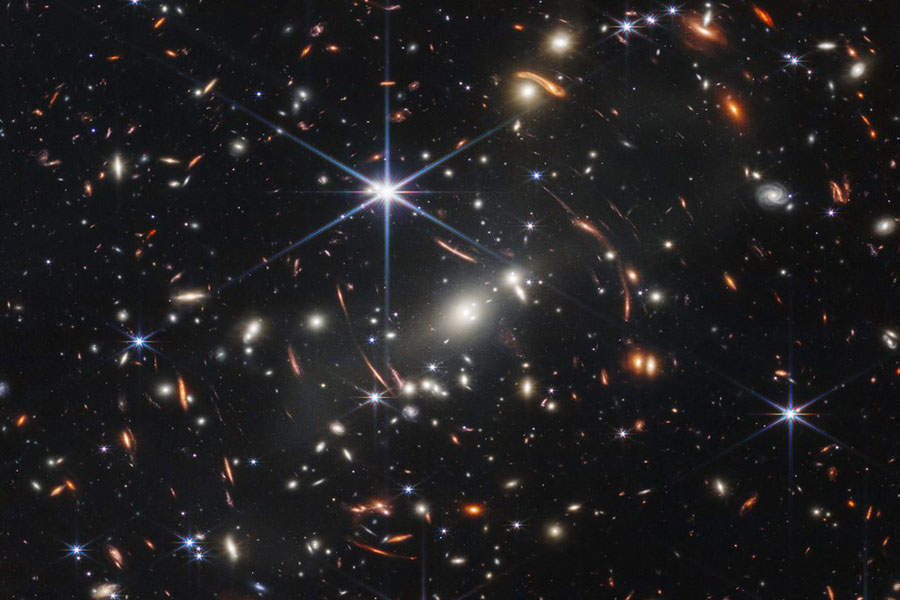 In this handout photo from NASA obtained on July 11, 2022, the first infrared image from the James Webb Space Telescope (JWST) is seen. The JWST is the most powerful telescope launched into space and it reached its final orbit around the sun, approximately 930,000 miles from Earths orbit, in January, 2022. Image: Handout / NASA / AFP

The James Webb Space Telescope's first images aren't just breathtaking—they contain a wealth of scientific insights and clues that researchers are eager to pursue.
Here are some of the things scientists now hope to learn.

Webb's first image, released Monday, delivered the deepest and sharpest infrared image of the distant universe so far, "Webb's First Deep Field."
The white circles and ellipses are from the galaxy cluster in the foreground called SMACS 0723, as it appeared more than 4.6 billion years ago—roughly when our Sun formed too.
The reddish arcs are from light from ancient galaxies that has traveled more than 13 billion years, bending around the foreground cluster, which acts as a gravitational lens.

NASA astrophysicist Amber Straughn said she was struck by "the astounding detail that you can see in some of these galaxies."
"They just pop out! There is so much more detail, it's like seeing in high-def."
Plus, added NASA astrophysicist Jane Rigby, the image can teach us more about mysterious dark matter, which is thought to comprise 85 percent of matter in the universe—and is the main cause of the cosmic magnifying effect.
The composite image, which required a 12.5 hour exposure time, is considered a practice run. Given longer exposure time, Webb should break all-time distance records by gazing back to the first few hundred million years after the Big Bang, 13.8 billion years ago.

The hunt for habitable planets

Webb captured the signature of water, along with previously undetected evidence of clouds and haze, in the atmosphere surrounding a hot, puffy gas giant planet called WASP-96 b that orbits a distant star like our Sun.
The telescope achieved this by analyzing starlight filtered through the planet's atmosphere as it moves across the star, to the unfiltered starlight detected when the planet is beside the star—a technique called spectroscopy that no other instrument can do at the same detail.
WASP-96 b is one of more than 5,000 confirmed exoplanets in the Milky Way. But what really excites astronomers is the prospect of pointing Webb at smaller, rocky worlds, like our own Earth, to search for atmospheres and bodies of liquid water that could support life.

Death of a star

Webb's cameras captured a stellar graveyard, in the Southern Ring Nebula, revealing the dim, dying star at its center in clear detail for the first time, and showing that it is cloaked in dust.
Astronomers will use Webb to delve deeper into specifics about "planetary nebulae" like these, which spew out clouds of gas and dust.
These nebulae will eventually also lead to rebirth.
The gas and cloud ejection stops after some tens of thousands of years, and once the material is scattered in space, new stars can form.

Stephan's Quintet, a grouping of five galaxies, is located in the constellation Pegasus.
Webb was able to pierce through the clouds of dust and gas at the center of the galaxy to glean new insights, such as the velocity and composition of outflows of gas near its supermassive black hole.
Four of the galaxies are close together and locked in a "cosmic dance" of repeated close encounters.
By studying it, "you learn how the galaxies collide and merge," said cosmologist John Mather, adding our own Milky Way was probably assembled out of 1,000 smaller galaxies.
Understanding the black hole better will also give us greater insights into Sagittarius A*, the black hole at the center of the Milky Way, which is shrouded in dust.

Perhaps the most beautiful image is that of the "Cosmic Cliffs" from the Carina Nebula, a stellar nursery.
Here, for the first time, Webb has revealed previously invisible regions of star formation, which will tell us more about why stars form with certain mass, and what determines the number that form in a certain region.
They may look like mountains, but the tallest of the craggy peaks are seven light years high, and the yellow structures are made from huge hydrocarbon molecules, said Webb project scientist Klaus Pontoppidan.
In addition to being the stuff of stars, nebular material could also be where we come from.
"This may be the way that the universe is transporting carbon, the carbon that we're made of, to planets that may be habitable for life," he said.

Perhaps most exciting of all is journeying into the unknown, said Straughn.
Hubble played a key role in discovering that dark energy is causing the universe to expand at an ever-growing rate, "so it's hard to imagine what we might learn with this 100 times more powerful instrument."
By Issam AHMED
© Agence France-Presse