Dubbed the "Uber Files," the ICIJ investigation found that company officials leveraged the sometimes violent backlash from the taxi industry against drivers to garner support and evaded regulatory authorities as it looked to conquer new markets early in its history 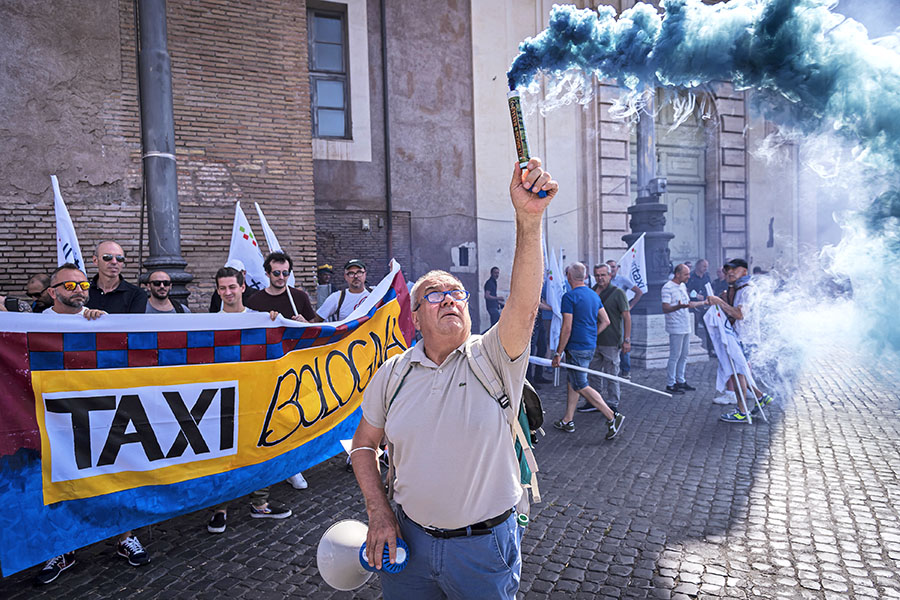 Protesters attend a national demonstration of taxi drivers to demand the withdrawal of Article 10 of the "Competition" bill introduced by the Draghi government which, the unions explain, "benefits multinationals" such as Uber on July 5, 2022 in Rome, Italy. This is the first day of a two-day strike by taxi drivers who are protesting a bill by the government that will liberalize the sector. Drivers argue the changes will favor multinational companies like Uber over independent drivers. Image: Stefano Montesi / Corbis via Getty Images

San Francisco, United States: A leaked cache of confidential files from ride-sharing company Uber illustrates ethically dubious and potentially illegal tactics it used to fuel its frenetic global expansion beginning nearly a decade ago, a joint media investigation showed Sunday.
Dubbed the "Uber Files," the investigation involving dozens of news organizations found that company officials leveraged the sometimes violent backlash from the taxi industry against drivers to garner support and evaded regulatory authorities as it looked to conquer new markets early in its history.
Culled from 124,000 documents from 2013-2017 initially obtained by British daily the Guardian and shared with the International Consortium of Investigative Journalists, the revelations are the latest hit for a company dogged by controversy as it exploded into a disruptive force in local transportation.

The cache includes unvarnished text and email exchanges between executives, with standouts from co-founder and former chief executive Travis Kalanick, who was forced to resign in 2017 following accusations of brutal management practices and multiple episodes of sexual and psychological harassment at the company.
"Violence guarantee(s) success," Kalanick messaged other company leaders as he pushed for a counter protest amid sometimes heated demonstrations in Paris in 2016 against Uber's arrival in the market.
Uber's rapid expansion leaned on subsidized drivers and discounted fares that undercut the taxi industry, and "often without seeking licenses to operate as a taxi and livery service," reported The Washington Post, one of the media outlets involved in the probe.
Drivers across Europe had faced violent retaliation as taxi drivers felt their livelihoods threatened. The investigation found that "in some instances, when drivers were attacked, Uber executives pivoted quickly to capitalize" to seek public and regulatory support, the Post said.
According to the Guardian, Uber has adopted similar tactics in European countries including Belgium, the Netherlands, Spain and Italy, mobilizing drivers and encouraging them to complain to the police when they were victims of violence, in order to use media coverage to obtain concessions from the authorities.
A spokesperson for Kalanick strongly denied the findings as a "false agenda," saying he "never suggested that Uber should take advantage of violence at the expense of driver safety."
Uber, however, placed the blame Sunday on previously publicized "mistakes" made by leadership under Kalanick.
"We've moved from an era of confrontation to one of collaboration, demonstrating a willingness to come to the table and find common ground with former opponents, including labor unions and taxi companies," it said, noting that his replacement, Dara Khosrowshahi, "was tasked with transforming every aspect of how Uber operates."

The investigation also found that Uber worked to evade regulatory probes by leveraging a technological edge, the Post wrote.
It described an instance when Kalanick implemented a "kill switch" to remotely cut off access of devices in an Amsterdam office to Uber's internal systems during a raid by authorities.
"Please hit the kill switch ASAP," he wrote in an email to an employee. "Access must be shut down in AMS (Amsterdam)."
Kalanick spokesperson Devon Spurgeon said the former chief executive "never authorized any actions or programs that would obstruct justice in any country."
Kalanick "did not create, direct or oversee these systems set up by legal and compliance departments and has never been charged in any jurisdiction for obstruction of justice or any related offense," she said.
But the investigation charged that Uber's actions flouted laws and that executives were aware, citing one joking that they had become "pirates."
The reports say the files reveal Uber also lobbied governments to aid its expansion, finding in particular an ally in France's Emmanuel Macron, who was economy minister from 2014 to 2016 and is now the country's president.
The company believed Macron would encourage regulators "to be 'less conservative' in their interpretation of rules limiting the company's operations," the Post said.
Macron was an open supporter of Uber and the idea of turning France into a "start-up nation" in general, but the leaked documents suggest that the minister's support even sometimes clashed with the leftist government's policies.
The revelations sparked indignation among leftist politicians, who denounced the Uber-Macron links as against "all our rules, all our social rights and against workers' rights," and condemned the "pillage of the country."
© Agence France-Presse