In their complaint seeking a class action suit, three drivers claim that Uber and Lyft, while treating them as independent contractors, have not truly given them independence and are trying to avoid giving drivers the benefits and protections of employment status while setting restrictions on the way they work

By Kellen Browning and Noam Scheiber 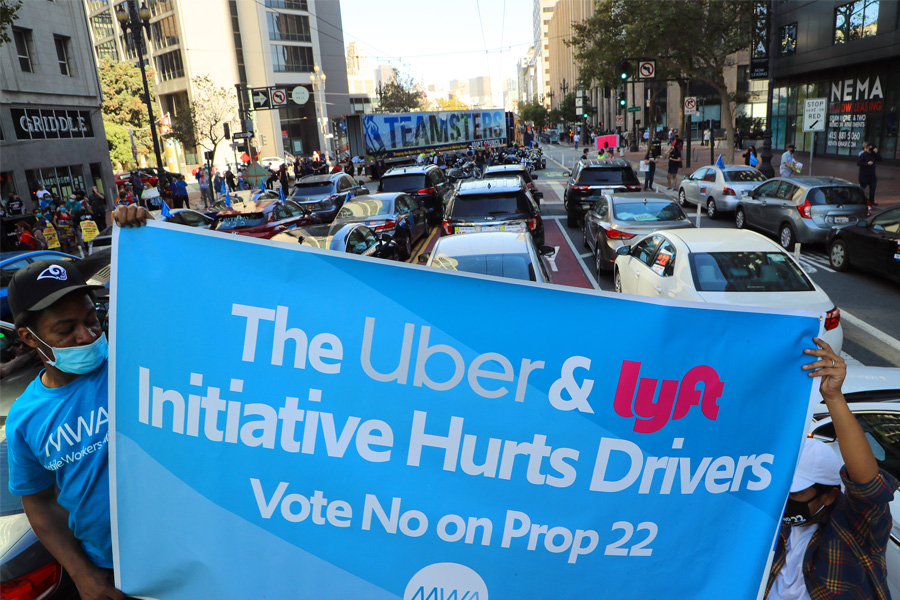 A protest on Oct. 15, 2020, outside Uber’s headquarters in San Francisco, urging voters to reject Proposition 22, which would have locked in the independent contractor status of drivers. A group of drivers claimed on Tuesday, June 21, 2022, that Uber and Lyft are engaging in anticompetitive practices by setting the prices customers pay and limiting drivers’ ability to choose which rides they accept without penalty. (Jim Wilson/The New York Times)

A group of drivers claimed Tuesday that Uber and Lyft are engaging in anticompetitive practices by setting the prices that customers pay and limiting drivers’ ability to choose which rides they accept without penalty.

The drivers, supported by the advocacy group Rideshare Drivers United, made the novel legal argument in a state lawsuit that targets the long-running debate about the job status of gig economy workers.

For years, Uber and Lyft have argued that their drivers should be considered independent contractors rather than employees under labor laws, meaning they would be responsible for their own expenses and not typically eligible for unemployment insurance or health benefits. In exchange, the companies argued, drivers could set their own hours and maintain more independence than they could if they were employees.

But in their complaint, which was filed in Superior Court in San Francisco and seeks class-action status, three drivers claim that Uber and Lyft, while treating them as independent contractors, have not truly given them independence and are trying to avoid giving drivers the benefits and protections of employment status while setting restrictions on the way they work.

In 2020, Uber and Lyft campaigned for drivers and voters to support a ballot measure in California that would lock in the independent contractor status of drivers. The companies said such a measure would help drivers by giving them flexibility, and Uber also began allowing drivers in California to set their own rates after the state passed a law requiring companies to treat contract workers as employees. Drivers thought the new flexibility was a sign of what life would be like if voters approved the ballot measure, Proposition 22.

Drivers were also given increased visibility into where passengers wanted to travel before they had to accept the ride. The ballot measure passed, before a judge overturned it.

The next year, the new options for drivers were rolled back. Drivers said they had lost the ability to set their own fares and now must meet requirements — like accepting five of every 10 rides — to see details about trips before accepting them.

The drivers said now they lacked both the benefits of being an employee and those of being an independent contractor.

“I couldn’t see this as fair and reasonable,” Gill said.

The inability to view a passenger’s destination before accepting the ride is particularly onerous, the drivers said. It sometimes leads to unanticipated late-night trips to faraway airports or out-of-the-way destinations that are not cost-effective.

“Millions of people choose to earn on platforms like Uber because of the unique independence and flexibility it provides,” Noah Edwardsen, an Uber spokesperson, said in a statement. “This complaint misconstrues both the facts and the applicable law, and we intend to defend ourselves accordingly.”

In the lawsuit, the drivers are asking that Uber and Lyft be barred from “fixing prices for ride-share services” and “withholding fare and destination data from drivers when presenting them with rides” and be required to give drivers “transparent per-mile, per-minute or per-trip pay” rather than using “hidden algorithms” to determine compensation.

The drivers are suing on antitrust grounds, arguing that if they are classified as independent contractors, then Uber and Lyft are interfering with an open market by restricting how they work and how much their passengers are charged.

“Uber and Lyft are either employers responsible to their employees under labor standards laws, or they are bound by the laws that prohibit powerful corporations from using their market power to fix prices and engage in other conduct that restrains fair competition,” the lawsuit says.

Experts said the complaint would be a long shot in federal court, where judges typically use a “rule of reason” to weigh antitrust claims against consumer welfare. Federal courts often allow potentially anti-competitive practices that arguably benefit consumers.

For example, Uber and Lyft might argue that the apparent restraints on competition help keep down wait times for customers by ensuring an adequate supply of drivers. The lawsuit argues that allowing drivers to set their own prices would most likely lead to lower fares for customers because Uber and Lyft keep a substantial portion of the fares and what customers pay typically bears little relationship to what drivers earn.

Whatever the case, courts in California could be more sympathetic to at least some of the claims in the complaint, the experts said.

Peter Carstensen, an emeritus law professor at the University of Wisconsin, said he was skeptical that the drivers would get traction with their claims that Uber and Lyft were illegally setting the price that drivers could charge.

But Carstensen said a state judge might rule in the plaintiffs’ favor on other so-called vertical restraints, such as the incentives that help tie drivers to one of the platforms by, for example, guaranteeing them at least $1,000 if they complete 70 rides between Monday and Friday. A judge may conclude that these incentives largely exist to reduce competition between Uber and Lyft, he said, because they make drivers less likely to switch platforms and make it harder for a new gig platform to hire away drivers.

“You’re making it extremely difficult for a third party to come in,” Carstensen said.

David Seligman, a lawyer for the plaintiffs, said the lawsuit could benefit from increasing scrutiny of anti-competitive practices.

“We think that policymakers and advocates and courts across the country are paying more attention and more closely scrutinizing the ways in which dominant companies and corporations are abusing their power in the labor market,” Seligman said.

The drivers say the rollback of options like setting their own prices has made it more difficult to earn a living as a gig worker, especially in recent months as gas prices have soared and as competition among drivers has started to return to pre-pandemic levels.

“It’s been increasingly more difficult to earn money,” said another plaintiff, Ben Valdez, a driver in Los Angeles. “Enough is enough. There’s only so much a person can take.”