The streaming platform was planning to introduce a new cheaper subscription model by the end of the year that would break its taboo on advertising, however there is no clear timeline on the rollout yet 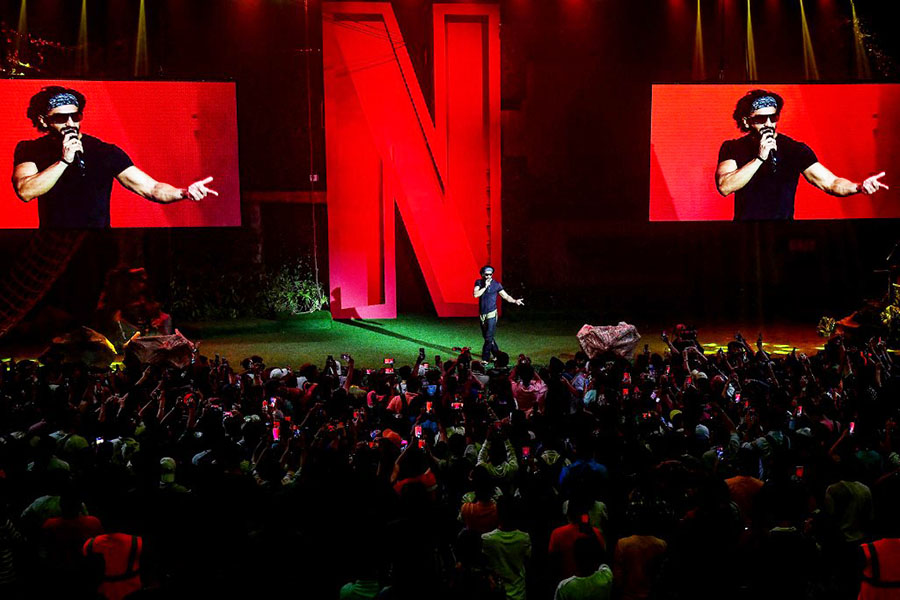 A trailer launch for Bollywood actor Ranveer Singh's upcoming Netflix series ‘Ranveer VS Wild with Bear Grylls’ in Mumbai on June 24, 2022. The streaming platform is planning to introduce a new cheaper subscription model by the end of the year that would break its taboo on advertising. Image: SUJIT JAISWAL / AFP

Paris, France: Netflix is "actively" working on building its cheaper, ad-supported deal, the company's French team said on Tuesday, but added there was no clear timeline.
It was revealed last month that the streaming platform was planning to introduce a new cheaper subscription model by the end of the year that would break its taboo on advertising.
That leak to the New York Times followed news that Netflix had lost 200,000 subscribers in the first quarter of the year—its first decline in a decade.
"We don't have a precise timeline yet," Anne-Gabrielle Dauba-Pantanacce, head of communications for Netflix France, told AFP.

"We are actively working on it. It's a priority—this idea of giving subscribers more options in the context of high inflation," she added.
Bloomberg reported over the weekend that Netflix has yet to appoint a head of advertising or build a sales team.
The Wall Street Journal said Netflix is actively looking into partnerships with Google and Comcast to provide ads.
There are also tricky questions about where to place the ads.
Should they come only at the start of programming? Or will their teams have to go back through countless hours of content to find suitable moments for an ad break in shows like "Stranger Things" that were never created with ads in mind?
"For now, nothing is decided," said Dauba-Pantanacce.
In its bid to rake in more cash, Netflix is also looking to crackdown on users who share their passwords with others.
Despite losing subscribers, which led to a tumble in its share price, Netflix remains by far the most popular streaming service in the world with 222 million subscribers.
But they are shared with an estimated 100 million other households that are not paying for the service.
© Agence France-Presse