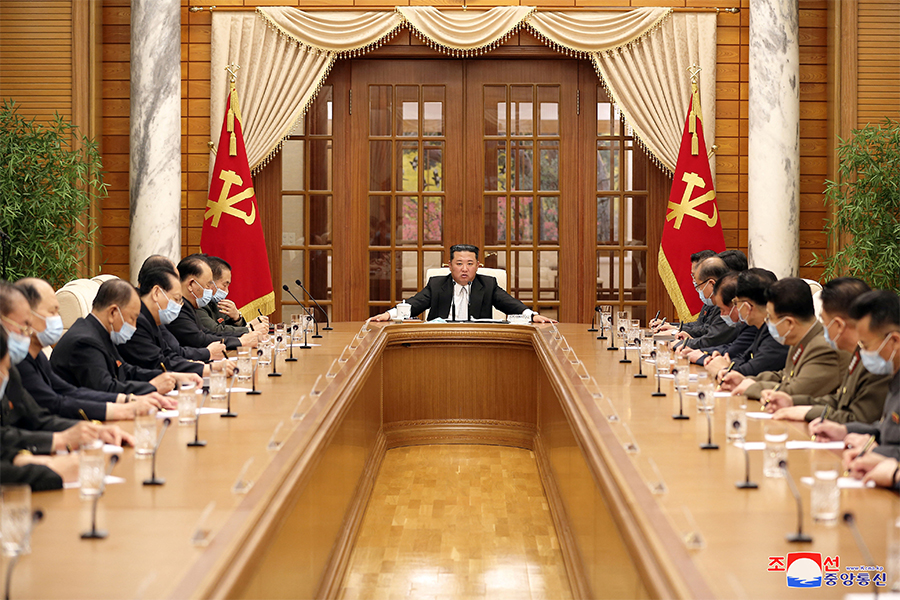 SEOUL, South Korea — North Korea on Thursday reported its first outbreak of the coronavirus, declaring a “maximum emergency” and ordering all its cities and counties to lock down to fight the spread.
On Sunday, health officials tested residents in an unidentified organization in Pyongyang, the capital, who showed symptoms such as fever, and confirmed that they were infected with with a subvariant, known as BA.2, of the omicron variant of the virus, the North’s official Korean Central News Agency said. The news agency did not reveal how many people were infected.
The report was the first time that the secretive country has confirmed any COVID-19 cases since the virus emerged in neighboring China more than two years ago.
North Korea’s leader, Kim Jong Un, convened the Political Bureau of the ruling Workers’ Party on Thursday to discuss the crisis, the news agency said.

Kim ordered “all the cities and counties to thoroughly lock themselves down” to help prevent the virus from spreading, and for factory workers and farmers to continue to work but in isolation.
The news agency said Kim had also called for national unity at a time of state emergency, telling his people that “an enemy worse than the malicious virus is unscientific fear and a lack of faith and will.”
Kim urged his country to continue to push forward with the bold five-year economic development plan he declared during a Workers’ Party Congress in January last year. Under that plan, North Koreans have been building residential districts in Pyongyang and greenhouse complexes in provinces.
Until Thursday, North Korea had publicly insisted that there were no cases of the virus in the country, although outside experts were skeptical, citing the country’s threadbare public health system and lack of extensive testing. North Korea has also rejected outside offers of pandemic-related humanitarian aid.
Officials in South Korea have hoped that humanitarian shipments, such as COVID-19 vaccines, could help restart the stalled dialogue between North Korea and the United States and allies.
It was unclear if the outbreak would change the North’s stance on humanitarian aid.
Turkmenistan and several small island nations, such as Tuvalu and Nauru, had also reported having no coronavirus cases, according to data from Johns Hopkins University.
North Korea had enforced some of the world’s harshest restrictions to contain the virus.
In 2020, it created a buffer zone along the border with China, issuing a shoot-to-kill order to stop unauthorized crossings, according to South Korean and U.S. officials. Also that year, when a man from South Korea defected to the North, North Korea declared a national emergency for fear he might have brought the virus.