For US businesses, there are pressing issues that demand fast answers, starting with: What will this mean for employees' health care coverage? Meanwhile, some executives are waiting for the other shoe to drop 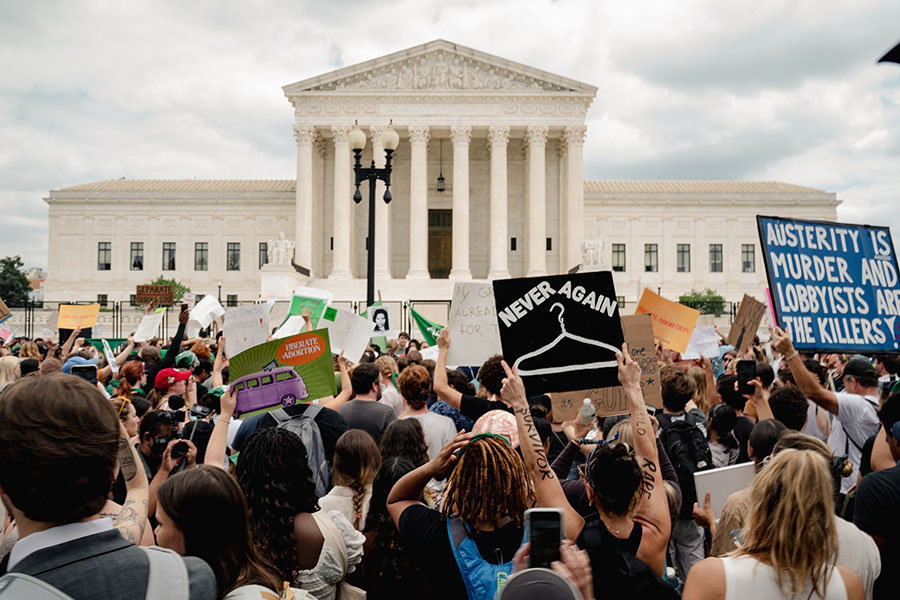 Friday’s Supreme Court decision overruling Roe v. Wade sent business leaders and employees across the nation scrambling for answers about how to react, what to say — or what not to say — and the immediate practical implications of the ruling.

‘This is the time of reckoning’

For U.S. businesses, there are pressing issues that demand fast answers, starting with: What will this mean for employees’ health care coverage? “I guarantee you that there are teams of lawyers trying to figure this out right now,” said Tom Baker, an insurance law expert at the University of Pennsylvania’s law school.

Businesses have already been battered in political and social fights in recent years and are reeling from competing demands from stakeholders — including activists, clients, consumers, shareholders and elected officials — about how to respond to the country’s bruising culture wars.

Some executives are already starting to focus on the potential for other shoes to drop: Justice Clarence Thomas’ concurring opinion raised questions about what other rights could soon disappear. The rationale that the Supreme Court used to declare that there is no right to abortion, he argued, should also be used to overturn cases establishing rights to contraception, consensual same-sex relations and same-sex marriage.

Local officials in states that restrict abortion are already threatening to punish businesses that help employees gain access to it elsewhere; activists who support abortion rights are calling on businesses to cut campaign donations to officials who oppose abortion.

“This is the time of reckoning,” said Sonja Spoo, director of reproductive rights campaigns at the gender justice organization UltraViolet, in a statement calling on corporations to act. She named AT&T, Comcast and Disney in particular for their political donations, and demanded that social media platforms like Facebook, YouTube, Twitter and TikTok ensure that people have access to accurate information about abortion.

There is also this backdrop: Many businesses are moving to lower-tax states, and many of those same states are now poised to enact near-total bans on abortion.

In the past year, Tesla moved from the San Francisco Bay Area to Austin, Texas; just this past week, Citadel said it was moving from Chicago to Miami. That has been the playbook for corporate America for decades: Find a blue enclave in a red state — Austin in Texas, Nashville in Tennessee — and move there for low taxes and a more affordable workforce.

That may be much more complicated in the aftershock of Friday’s ruling.

Also read: As US undoes abortion rights, Chile works to enshrine them

Companies began to come out with policies on covering travel expenses for employees who need abortions when a draft opinion that was leaked in May previewed the justices’ decision in the case. This small group includes Starbucks, Tesla, Yelp, Airbnb, Netflix, Patagonia, DoorDash, JPMorgan Chase, Levi Strauss & Co., PayPal and Reddit.

Others, including Goldman Sachs, Disney, Meta, Dick’s Sporting Goods and Condé Nast, joined them Friday when the decision became final, although most of them avoided making public statements directly referring to the ruling. Instead, the statements often obtusely signaled that the companies offered out-of-state medical services, seemingly hoping to appeal to employees without drawing the ire of politicians.

Facebook told employees not to discuss the decision on internal chat systems.

A spokesperson for JPMorgan, the country’s largest bank, with about 170,000 U.S. employees, said it was focused on equal access to health care for all its employees. She highlighted a June 1 memo alerting them that their travel costs would be covered if they needed to go more than 50 miles to receive certain medical procedures, including abortions.

But the ruling raises new questions over whether state authorities may try to prosecute businesses that offer to pay for employees to travel out of state for abortions, as lawmakers in Texas have been threatening to do.

“This kind of decision forces politics into the workplace, and employers hate that,” said Austin Kaplan, an employment lawyer in Texas.

A signal to the rest of the world

Outside the United States, the Supreme Court decision is being watched closely.

In Belgium, Prime Minister Alexander De Croo said on Twitter Friday that he was concerned about the implications of overturning Roe v. Wade. “Banning abortion never leads to fewer abortions, only to more unsafe abortions,” he tweeted, adding that Belgium would continue working with other countries to advance reproductive health and rights.

Nicola Sturgeon, Scotland’s first minister, said the decision was one of the darkest days for women’s rights in her lifetime. “Obviously the immediate consequences will be suffered by women in the US — but this will embolden anti-abortion & anti-women forces in other countries too,” she tweeted.

Most of the European companies contacted by DealBook declined to comment or said it was too early to say how the Supreme Court’s decisions on gun regulation and abortion affected their approach to posting employees in the U.S. But in general, most European countries have, in recent years, moved to relax abortion restrictions.

In a Senate hearing last month, after a leaked draft decision indicated the Supreme Court would overturn Roe v. Wade, Treasury Secretary Janet Yellen said an abortion ban would damage both the U.S. economy and economic prospects for women.

She added that legalization of abortion helped lead to increased labor force participation among women and that “denying women access to abortion increases their odds of living in poverty or need for public assistance.”

A 2020 working paper published in the National Bureau of Economic Research comparing economic outcomes for women who were able to access abortions with those who weren’t, found those without access experienced “a large increase in financial distress that is sustained for several years.” It also concluded that women who were denied abortions had substantially more public records, which include events like eviction and bankruptcies.

For companies that don’t want to weigh in on political or social issues, Sarah Miller, an assistant professor at the Ross School of Business at the University of Michigan and a lead author of the paper, said being reticent could impact their labor cost since “at some point in the pandemic, women crossed the 50% threshold for the workforce.”