Dutch physician Rebecca Gomperts' abortion boat and the Women on Waves group have anchored their ship in international waters off the coasts of Poland, Spain, Mexico and other countries, offering medical abortions to women; in the US interest has been surging in her other organization, Aid Access, which since 2018 has provided abortion pills over the internet 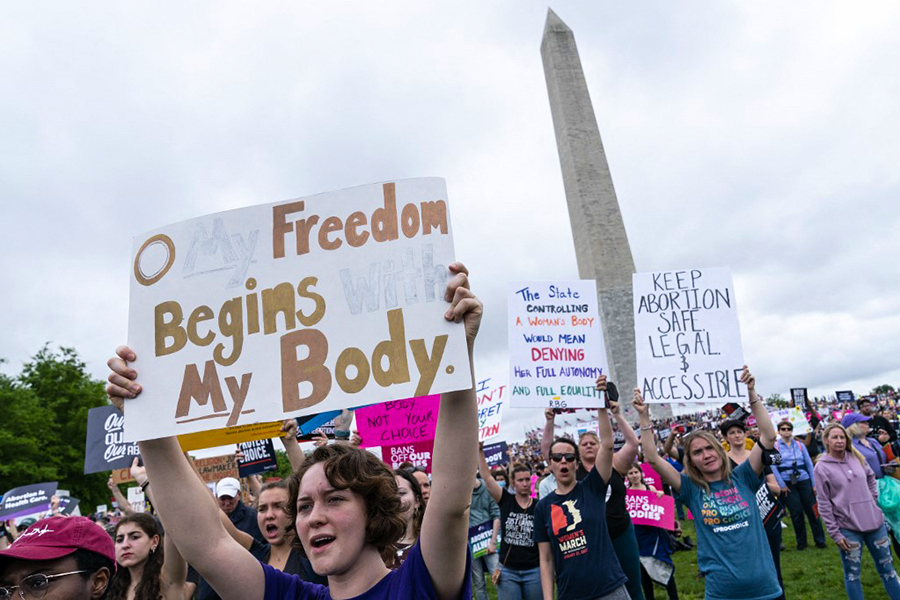 Abortion rights activist rally at the Washington Monument before marching to the US Supreme Court in Washington, DC, May 14, 2022. Thousands of activists are participating in a national day of action calling for safe and legal access to abortion. The nationwide demonstrations are a response to leaked draft opinion showing the US Supreme Court's conservative majority is considering overturning Roe v. Wade, the 1973 ruling guaranteeing abortion access. (Credits: Jose Luis Magana / AFP)

Washington, United States: Rebecca Gomperts, a 55-year-old Dutch physician, has spent years fighting for women's access to abortion around the world.
Made famous by her "abortion boat," as recounted in the 2014 documentary "Vessel," she and her Women on Waves group have anchored the ship in international waters off the coasts of Poland, Spain, Mexico and other countries, offering medical abortions to women otherwise unable to obtain them.
But it is in the United States that interest has been surging in her other organization, Aid Access, which since 2018 has provided abortion pills over the internet.
Behind the fast-rising demand is what appears—based on a rare leak from the US Supreme Court—to be the imminent end of federal protection for abortion rights. Once the court makes its decision official, probably next month, some 20 states are poised to ban or severely restrict abortions.
"We're already seeing a huge increase in requests," Gomperts told AFP, saying some people were "panicking."
"It's not only when this takes place; it has already made people aware how vulnerable they are."
Aid Access, based in Austria, has been working with physicians to fill requests in the 20 US states where abortion pills can be legally prescribed by telemedicine.
For requests from the other states, Gompert's group has exploited a legal loophole to send the pills from abroad.

Demand was strong even before word of the high court's intentions leaked out. In a little more than a year (from October 2020 to December 2021), Aid Access says it received more than 45,000 requests from the United States.
Reasons for the requests vary: the high cost of other abortion services, the cost and difficulty of traveling to distant abortion clinics, or the impossibility of doing so due to job or child-care demands.
After filling out a questionnaire, women are instructed on how to take the pills at home. The price is adjusted depending on their ability to pay, and the pills are mailed from a pharmacy in India. Aid Access checks in with the women afterward.

The pills are easy to find elsewhere on the internet, usually for a few hundred dollars. But those websites, also based outside the United States, are purely commercial and provide no medical support.
For Gomperts, who in 2020 was listed as one of the world's 100 most influential people by Time magazine, the fight for abortion rights is a matter of "social justice."
"The biggest problem is that the women that are not literate, that cannot read and write, that have no access to internet—the most impoverished group—they will not be able to find these solutions," she said.
Many of them would lack the resources to travel to a state where abortion remains legal.
"These are the women that might be forced to give birth or that will take drastic measures to end their pregnancy."
The certain result, Gomperts said, will be an increase in maternal mortality and morbidity.

According to a 2017 survey of several thousand women in the United States, 20 percent of those who had attempted an at-home abortion used the pills, 29 percent used other drugs, 38 percent used plant-based infusions and 20 percent tried physical methods (some used more than one method, so the total exceeds 100 percent).
During recent demonstrations outside the Supreme Court, women protesters brandished a disturbing object, something that seemed an artifact from a long-ago era: metal clothes-hangers—a symbol of highly risky abortions performed clandestinely.
And yet, up to the 10th week of pregnancy, abortion pills are very safe, experts say.
Today they represent half of all abortions in the United States (in France, by way of comparison, the figure is 70 percent). And their use outside of any medical setting is a "very acceptable" option, according to the World Health Organization (WHO).
Two drugs are used: first a dose of mifepristone is taken to block the hormones that support a pregnancy; then, 24 to 48 hours later, misoprostol is taken to induce contractions.
Complications that might require medical help—an excessive flow of blood, an infection or an allergic reaction—are rare.
So, beyond the medical aspect, the real risk to at-home abortions is legal complications.
The NGO If/When/How has counted 60 cases in which women who allegedly self-managed abortions, or people who assisted them, were arrested, charged or sentenced between 2000 and 2020.
The group, which says it envisions "a future when all people can self-determine their reproductive lives free from discrimination, coercion or violence," helps find legal representation for such women.
It fears the trend toward criminalizing abortion will be greatly aggravated if the Supreme Court rules as expected.
Such a ruling, said Gomperts, "instills fear in people, and especially in health-care providers —and that is the biggest impact."
By Lucie AUBOURG
© Agence France-Presse

Tweets by @forbesindia
US, EU to boost coordination on semiconductor supply, Russia
Sri Lanka's many missteps that led its economy into a tailspin