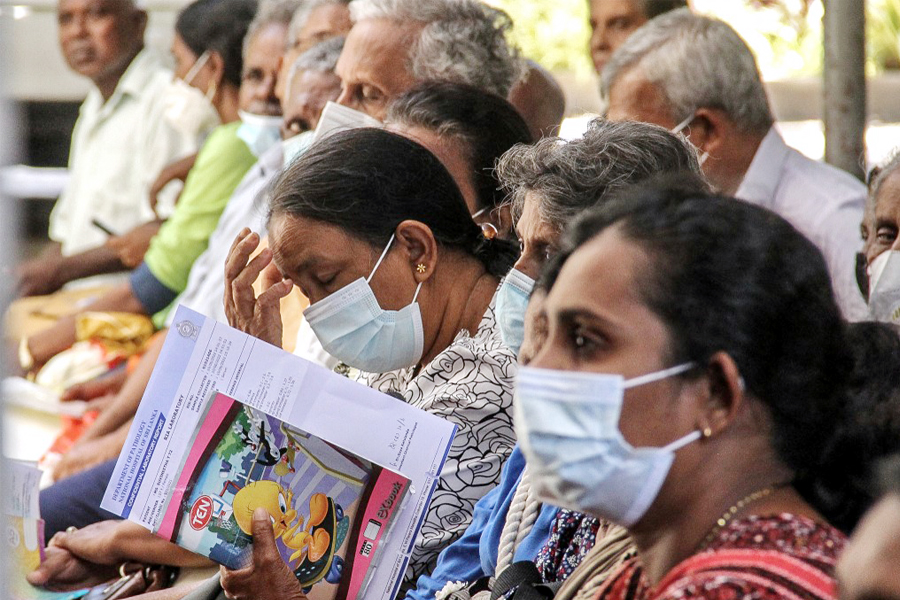 In this picture taken on July 19, 2022, patients wait for their appointment with medical staff outside the out-patient department at the National Hospital in Colombo. Entire wards are dark and nearly empty in Sri Lanka's largest hospital, its few remaining patients leaving untreated and still in pain, and doctors prevented from even arriving for their shifts. An unprecedented economic crisis has dealt a body blow to a free and universal healthcare system that just months earlier was the envy of the country's South Asian neighbours. Image: Ishara S Kodikara / AFP

Colombo, Sri Lanka: Entire wards are dark and nearly empty in Sri Lanka's largest hospital, its few remaining patients leaving untreated and still in pain, and doctors prevented from even arriving for their shifts.
An unprecedented economic crisis has dealt a body blow to a free and universal healthcare system that just months earlier was the envy of the country's South Asian neighbours.
Suffering from diabetes and high blood pressure that inflamed her joints, Theresa Mary travelled to the capital Colombo for treatment at the National Hospital of Sri Lanka.
Unable to find a ride for the last leg of her journey, she had to limp the last five kilometres (three miles) on foot.

She was discharged four days later, still finding it difficult to stand on her feet, because the dispensary had run out of subsidised painkillers.
"Doctors asked me to buy medicines from a private pharmacy, but I don't have money," Mary, 70, told AFP.
"My knees are still swollen. I don't have a home in Colombo. I don't know how long I have to walk."
The National Hospital normally caters to people all over the island nation in need of specialist treatment, but it now runs on reduced staff and many of its 3,400 beds are lying unused.
Supplies of surgery equipment and life-saving drugs have been almost exhausted, while chronic petrol shortages have left both patients and doctors unable to travel for treatment.
"Patients scheduled for surgeries are not reporting," Dr Vasan Ratnasingham, a member of a government medical officers' association, told AFP.
"Some medical staff work double shifts because others cannot report for duty. They have cars but no fuel."
Sri Lanka imports 85 percent of its medicines and medical equipment, along with raw materials to manufacture the remaining share of its needs.
But the country is now bankrupt and a lack of foreign currency has left it unable to source enough petrol to keep the economy moving—and enough pharmaceuticals to treat its sick.
Also read: Lavish projects and meagre lives: The two faces of a ruined Sri Lanka
"Normal painkillers, antibiotics and paediatric medicines are in extremely short supply. Other medicines have become up to four times expensive in the last three months," pharmacy owner K. Mathiyalagan told AFP.
Mathiyalagan said his colleagues had to reject three out of every 10 prescriptions because they lacked the means to fill them.
"A lot of basic medicines are completely out of stock," he added. "Doctors prescribe without knowing what is available in the pharmacies."

Health ministry officials declined to give details about the present state of Sri Lanka's public health services, on which 90 percent of the population depends.
But doctors working in government hospitals say they have been forced to curtail routine surgeries to prioritise life-threatening emergencies, and use less effective substitute medicines.
"Sri Lanka's once-strong healthcare system is now in jeopardy," UN Resident Coordinator Hanaa Singer-Hamdy said in a statement. "The most vulnerable are facing the greatest impact."
The World Bank recently redirected development funds to help Sri Lanka pay for urgently needed medications, including anti-rabies vaccines.
Also read: Sri Lanka's many missteps that led its economy into a tailspin
India, Bangladesh, Japan and other countries have helped with donations for the healthcare sector, while Sri Lankans living abroad have pitched in by sending home pharmaceuticals and medical equipment.
But new President Ranil Wickremesinghe has warned that the country's economic crisis was likely to continue to the end of next year, and Sri Lanka is staring at the prospect of an even worse public health crisis to come.
Hyperinflation has driven food prices so high that many households are struggling to keep themselves fed.
According to the World Food Programme, nearly five million people—22 percent of the population—need food aid, with more than five out of every six families either skipping meals, eating less or buying lower-quality food.
If the crisis drags on, "More infants will die, and malnutrition will be rampant in Sri Lanka," Dr Vasan of the medical officers' association told AFP.
"It will bring our healthcare system to the verge of collapse."
By Parvaiz BUKHARI
© Agence France-Presse