Who is Mark Zuckerberg's new no. 2? It's a trick question.

While Zuckerberg named Javier Olivan, a longtime executive, to take over Sheryl Sandberg's job when she departs, the importance of the chief operating officer role has diminished at Meta, which was formerly known as Facebook

By Sheera Frenkel and Mike Isaac 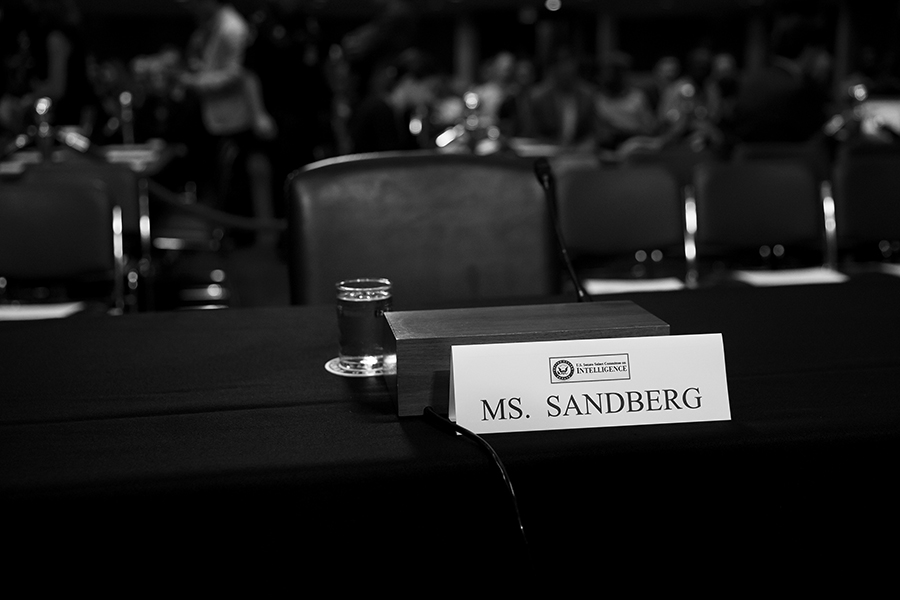 A name card for Sheryl Sandberg, then the chief operating officer of Facebook, before she testified at a Senate hearing in Washington, Sept. 4, 2018. When Sandberg, 52, said that she would step down from Meta, she crystallized an unspoken change at the tech giant: Mark Zuckerberg no longer has any clear No. 2. (Eric Thayer/The New York Times)

For more than a decade, Mark Zuckerberg and Sheryl Sandberg began and ended each week by meeting together.

The symbolism of the ritual was clear. It was intended to signal that Zuckerberg, the CEO of Meta, and Sandberg, the chief operating officer, were in lockstep with each other at the top of the company.

But when Sandberg, 52, said Wednesday that she would step down from Meta this fall, she crystallized an unspoken change at the tech giant: Zuckerberg no longer has any clear No. 2.

While Zuckerberg named Javier Olivan, a longtime executive, to take over Sandberg’s job when she departs, the importance of the chief operating officer role has diminished at Meta, which was formerly known as Facebook. Zuckerberg, 38, instead has four executives who have equally large responsibilities and who answer to and run major decisions by him.

Zuckerberg made the structural shift because he wanted to consolidate his control over all arms of the company, three people close to him said. While Zuckerberg has always been the undisputed boss, with a majority of the company’s voting shares, he shared power with Sandberg when he was a younger businessman and needed help expanding the company. But with more than 18 years of experience under his belt, he wants to exercise all of his power and be identified more clearly as Meta’s sole leader, the people said.

The four top lieutenants are Andrew Bosworth, the chief technology officer; Nick Clegg, the president of global affairs; Chris Cox, the chief product officer; and Olivan, who was the head of growth, Zuckerberg said in a Facebook message about Sandberg’s exit on Wednesday.

Each of the four men has major responsibilities. Clegg is the public face and ambassador for Meta, while Bosworth is pushing the company into the immersive world of the so-called metaverse. Cox oversees Meta’s family of apps — Instagram, WhatsApp, Messenger and Facebook — and Olivan will be in charge of analytics, infrastructure and growth.

But none of them have as much power as Sandberg used to, when she effectively ran all of the business operations while Zuckerberg focused on developing Facebook’s products.

Zuckerberg alluded to the power shift Wednesday in his Facebook post. He said he didn’t “plan to replace Sheryl’s role in our existing structure,” adding that Meta “has reached the point where it makes sense for our product and business groups to be more closely integrated, rather than having all the business and operations functions organized separately from our products.”

R.A. Farrokhnia, a professor at Columbia University’s Business and Engineering Schools, said the shift in management structure made sense as Meta invested in the metaverse and moved away from the social networking model that Sandberg built an advertising business for and championed for years.

“Moving in this direction requires a more decentralized — and more traditional — governance structure,” Farrokhnia said. “You have multiple people coming together where the sum of the parts becomes much larger.”

A spokesperson for Meta declined to comment and declined to provide interviews with executives.

For years, Zuckerberg and Sandberg had clear-cut responsibilities, which employees often referred to as the “Sandberg side” and “Mark side.” Sandberg ran the business, policy and legal teams with a lot of autonomy, while Zuckerberg was responsible for the engineering and product teams.

That began changing in 2020 after Facebook dealt with scandals involving privacy, misinformation and other toxic content on the platform. Zuckerberg told his teams that he was done apologizing and wanted to focus more time and attention on innovative products that the company was designing.

Since then, Zuckerberg has assumed more control over public messaging and policy decisions, which Sandberg used to handle. He also brought in hires with public policy expertise and promoted longtime executives who were loyal to his vision.

Three executives he promoted were Bosworth and Cox, who have been at the company for 16 years, and Olivan, who joined nearly 15 years ago. They were among Zuckerberg’s earliest recruits, and were instrumental in building the earliest versions of Facebook.

At Meta, insiders have long speculated over who a potential successor to Zuckerberg would be, should he ever leave. Sandberg’s impending departure has now shortened that list and left no clear answers.

“Over the years, few folks other than Sheryl have emerged as a potential successor to Mark,” said Katie Harbath, a director of public policy at Meta who left the company last year. “It makes sense for Mark to want options for possible successors.”

She added: “It can be risky to only focus on one person.”

Tweets by @forbesindia
Europe's Russian oil ban could mean a new world order for energy
Are cookies a friend or a foe for internet users?