Why Europe's electricity prices are soaring

Natural gas, which is used to generate electricity and heat, now costs about 10 times more than it did a year ago. Electricity prices, tied to the price of gas, are also several times higher than what used to be considered normal 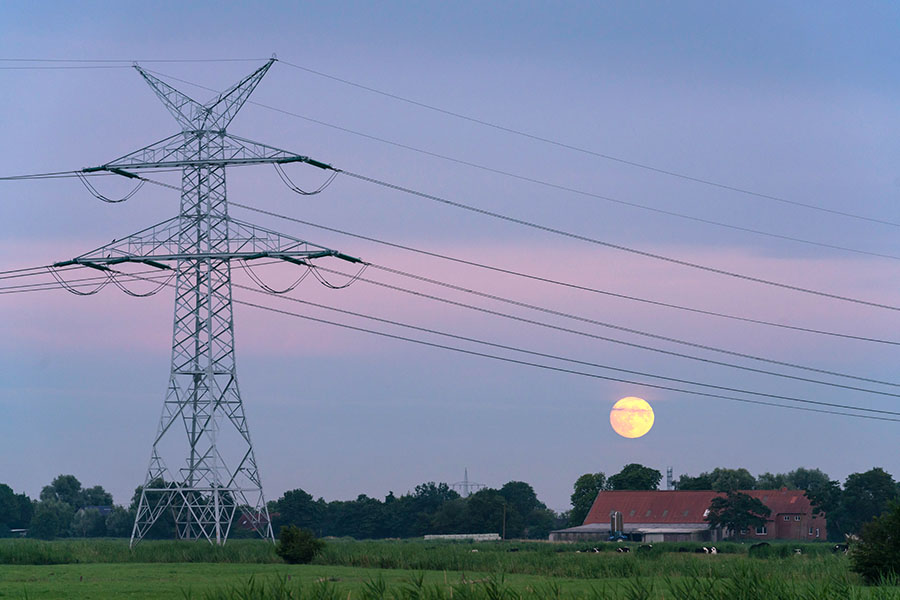 LONDON — Energy traders in Europe are witnessing price increases that are hard to fathom. Natural gas, which is used to generate electricity and heat, now costs about 10 times more than it did a year ago. Electricity prices, tied to the price of gas, are also several times higher than what used to be considered normal.

As Russia tightens the screws on flows of gas, the energy markets are locked in a relentless upward climb. This week, benchmark European natural gas prices hit a series of records after Gazprom, the Russian gas giant, said it would temporarily shut a key pipeline to Germany at the end of August — a move that has further stoked market fears.

Electricity prices have been extremely volatile. In Britain, the wholesale price of a megawatt-hour of electricity (enough to supply about 2,000 homes for an hour) hit a record daily average of about 500 pounds, or $590, early this week, roughly five times the level of last August, according to Rajiv Gogna, a partner at LCP, a consulting firm.

In some countries, there is little cushion between these wholesale prices and what consumers must pay in their monthly bills. On Friday, the British electricity regulator will reset an energy price cap that is widely expected to almost double the price that a typical British household would pay in the coming months for electricity and gas, to about 3,500 pounds a year. The jump reflects steadily increasing costs for gas and electricity.

Further price increases in Britain and elsewhere are anticipated, adding to hardship and bolstering arguments for government intervention.

Why do the prices of natural gas and electricity keep climbing?

Driving the prices is a fear that Europe will run out of gas this winter. Russia has slashed gas flows to Germany and other countries. Even before the coming three-day shutdown, Nord Stream 1, a key conduit of fuel to Germany, has been flowing at only 20% of capacity. These cutbacks are forcing gas providers to buy gas on the spot market at higher and volatile prices than under longer-term Gazprom contracts.

In many countries, gas and electric power prices are closely intertwined, a relationship that has added to Europe’s woes. Although there are several ways to generate electricity — such as coal, nuclear, hydroelectric, wind and solar — the price of natural gas is hugely influential in setting electricity prices because gas-burning generators are most often paid to come into service when a power grid like Britain’s needs more electricity.

“Natural gas is the driver for the European electricity price,” said Iain Conn, a former CEO of Centrica, a large British utility.

This relationship makes Europe more vulnerable to Russia’s energy weapon. Unlike the United States, which has an ample surplus of natural gas to export, thanks to shale drilling, Europe needs to import the bulk of its gas, with Russia traditionally supplying around one-third. Well before Russia’s invasion of Ukraine in February, European gas and power prices rose over supply concerns.

“When natural gas supplies get tight, the electricity market gets extremely exercised,” said Conn, who is also a former senior executive of BP, the energy giant.

Other factors are pushing up power prices, including low river levels that are impeding shipments of fuel to coal-fired plants that Germany and other governments want to fire up to replace gas.

What are governments doing to stem the crisis?

The short answer is, a lot. European Union countries like Germany and the Netherlands are racing to fill gas storage facilities as a buffer against a possible complete cutoff of Russian gas this winter. Governments have also moved to secure more supplies in the form of liquefied natural gas from the United States and elsewhere and prodded energy companies to build new terminals for receiving the chilled fuel, often with state financing.

Britain and other countries are providing financial aid to consumers, although not enough to compensate for the huge increased costs that households face.

A wide spectrum of politicians, consumer advocates and even energy industry executives are calling for governments to do much more.

“What’s increasingly clear is these tough conditions for U.K. households are going to get much, much worse before they get better,” Keith Anderson, CEO of Scottish Power, a British utility, said in a recent open letter. Anderson suggested that the government intervene to cover the rising cost of gas, a proposal that could cost tens of billions of pounds over the next two years.

Government mandates are already forcing markets to behave in a way that would seem bizarre in other circumstances.

In a normal market, for instance, high prices would lead to selling gas, not stockpiling it. But the pressure to fill gas storage facilities, backed by the government directives, has forced energy companies to buy — and keep buying — expensive gas, driving the price ever higher.

Also read: EU plan to cut gas use by 15% comes into effect

In one sense, the storage program has been very successful. Salt caverns and other locations in Germany are more than 80% full, on track to meet a target of 95% by Nov. 1.

But the urge to buy protection for the winter is driving up prices, and is doing some of the economic damage it was intended to prevent, analysts say.

“The market is totally debased and distorted now,” said Henning Gloystein, a director at Eurasia Group. “If you were a semi-sensible trader, you would sell all the gas you have in storage now out into the spot market and make an absolute killing,” he added. The governments in Germany and elsewhere, though, are insisting on other priorities.

Indeed, pressure is growing for even more government intervention.

Already, many small British energy suppliers have gone bankrupt, leading to higher costs for the government and consumers. France is taking full control of EDF, the large utility and builder of nuclear plants.

On Aug. 17, Uniper, one of Germany’s largest gas utilities, reported a loss of more than 12 billion euros ($12 billion) for the first half of the year, attributing much of the deficit to the impact of having to replace gas contracted from Gazprom but not delivered at higher market prices. The company agreed last month to a bailout, which includes the government taking a large equity stake in the company.

“We at Uniper have de facto become a pawn in this conflict,” said Klaus-Dieter Maubach, the company’s CEO, referring to the war in Ukraine.

Why aren’t wind and solar power helping to keep prices down?

Analysts say that so far these technologies are helping only marginally to lower prices, because in wholesale electricity markets natural gas remains the key determinant in power prices. Chris Matson of LCP estimated that in 2021, Britain’s power prices were determined by gas more than 90% of the time, even though the fuel accounted for only about 40% of total generation.