However, serious objections remain from some of the countries that host major pharmaceutical companies, like Britain and Switzerland—a problem at the WTO, where decisions are taken by consensus rather than by majority 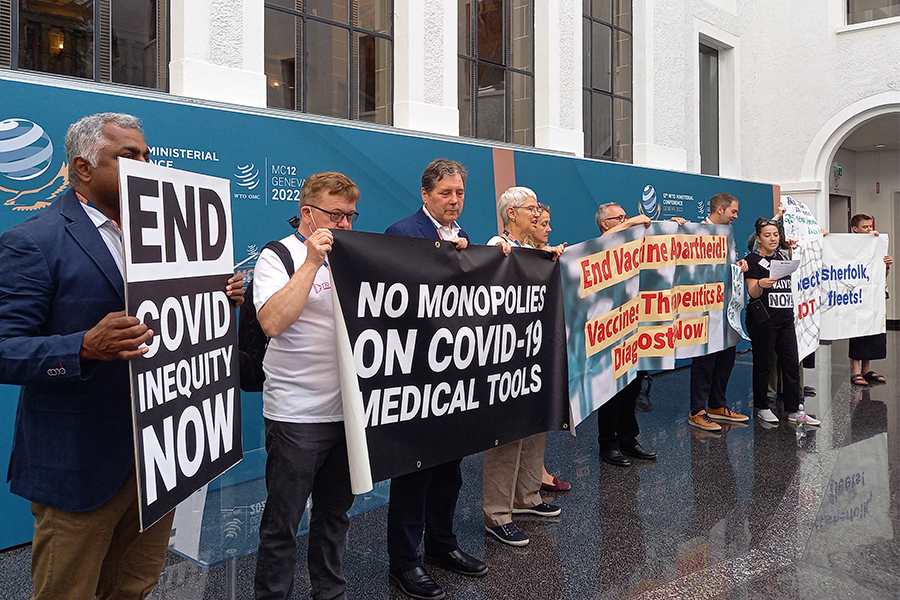 Non-governmental organisation members shout slogans and hold banners as they stage a protest in the World Trade Organization headquarters' central atrium during the second day of a WTO Ministerial Conference in Geneva on June 13, 2022. (Image: Robin MILLARD / AFP)

Genève, Switzerland: The WTO's search for a role in fighting the pandemic sharpened up on Monday as ministers seek a compromise to lift intellectual property rights on Covid-19 vaccines.
The World Trade Organization's first ministerial meeting since December 2017 is wrestling with the wording of a text that would temporarily waive patents on coronavirus jabs.
It is the main pandemic-combating idea being negotiated at MC12, the global trade body's 12th ministerial conference, being held from Sunday to Wednesday at its headquarters in Geneva.
But serious objections remain from some of the countries that host major pharmaceutical companies, like Britain and Switzerland—a problem at the WTO, where decisions are taken by consensus rather than by majority.

The world's big pharma firms are dead set against the idea, insisting that stripping patents will cripple investment and innovation.
They also say the plan has gone past its sell-by date as the world now has a surplus of vaccine doses rather than a shortage.
After Sunday's opening ceremony and countries setting out their positions, ministers from the 164 WTO members went into rooms at the organisation's grand, 1920s-era HQ on Lake Geneva to start talking it out face to face.
"There is continued cautious optimism about getting results at this ministerial conference," WTO spokesman Daniel Pruzin told reporters at the close of Monday's talks on a range of subjects.
An agreed text on the waiver is "getting closer but it needs a little bit more work" he said, describing the talks as still "problematic".

This week's conference is a crunch moment for WTO chief Ngozi Okonjo-Iweala, who has staked her leadership on breathing new life into the crippled organisation, where progress has been stumbling for years.
The Nigerian former finance and foreign minister took over in March 2021 on a mission to make the WTO relevant again.
But on her 68th birthday Monday, there was no immediate sign of a breakthrough on vaccine patents.
"Pretending that a sweeping IP waiver would solve the problem does not correspond to reality. IP is not part of the problem but part of the solution," Swiss ambassador Markus Schlagenhof told reporters.
British trade minister Anne-Marie Trevelyan said the challenge was to reach a "workable decision" on the waiver "which supports business and governments".
Public interest groups say the draft text falls far short of what is needed, by time-limiting and complicating the vaccine patents waiver—and by leaving out Covid treatments and diagnostics.
Campaigners staged a protest in the WTO's central atrium, chanting slogans and unfurling banners reading: "No monopolies on Covid-19 medical tools" and "End vaccine apartheid".
"Folks have been campaigning on this for two years and it's been a complete wall by a few countries," demonstration organiser Deborah James told AFP.
"It's an indictment of the WTO system: it's completely broken, it can't respond to a pandemic, it has no ability to put anything other than maximising profits for corporations ahead of anything else."

In October 2020, India and South Africa began pushing for the WTO to lift IP rights on Covid-19 vaccines, tests and treatments to help ensure more equitable access in poorer nations.
After multiple rounds of talks, the United States, the European Union, India and South Africa hammered out a compromise.
The text would allow most developing countries, although not China, to produce Covid vaccines without authorisation from patent holders.
Pruzin said the talks still needed to come up with a formulation on which countries would be eligible for the waiver.
Under discussion is whether countries that produce more than 10 percent of global vaccines would be ineligible to use the waiver, or whether countries would self-declare that the waiver should not apply to them.
Besides production, a second text being negotiated seeks to tackle supply constraints faced by certain countries in getting hold of Covid-fighting tools.
Pruzin said members were coming close to agreeing a text.
While many ministers said the draft on pandemic preparedness and response was "not ideal, nonetheless, broad convergence seems to be emerging for its adoption", he told reporters.
Beyond the pandemic, the WTO faces pressure to eke out long-sought trade deals on a range of issues and show unity amid an impending global hunger crisis.
By Robin MILLARD
© Agence France-Presse

Tweets by @forbesindia
How Fantasy Akhada is finding its niche in Tier II cities and beyond
By 2032, AI-enabled advertising could account for $1.3 trillion in ad revenue