Fewer Students are Passing the CA Final Exams, Why?

Call it a result of the economic downturn, the Satyam effect or simply turning off the tap by the Institute of Chartered Accountants of India (ICAI). The Chartered Accountancy final examination results touched a record low in the November 2009 attempt. The CA exam is clubbed into two groups of four subjects each. Of the 18,502 students who appeared for both groups, only 1,454 passed. That is a pass percentage of 7.86 percent. Now compare this with the November 2007 results; a time when the economy was rocking. Of the 8,654 students who appeared for both groups, 2,446 cleared the exam. That’s almost 28.26 percent.

That’s a striking fall in just two years. Most students who sat for the November 2009 final attempt have been pursuing the course for almost five years. So, when the results were announced on January 17, 2010, the usual euphoria was missing. At the Big Four — PricewaterhouseCoopers, Ernst & Young, KPMG and Deloitte — there were no exuberant mails from partners spelling out how brilliantly the articles had fared. Just to give you a sense, at one of the smaller firms, 21 articles took the exam and only one cleared. 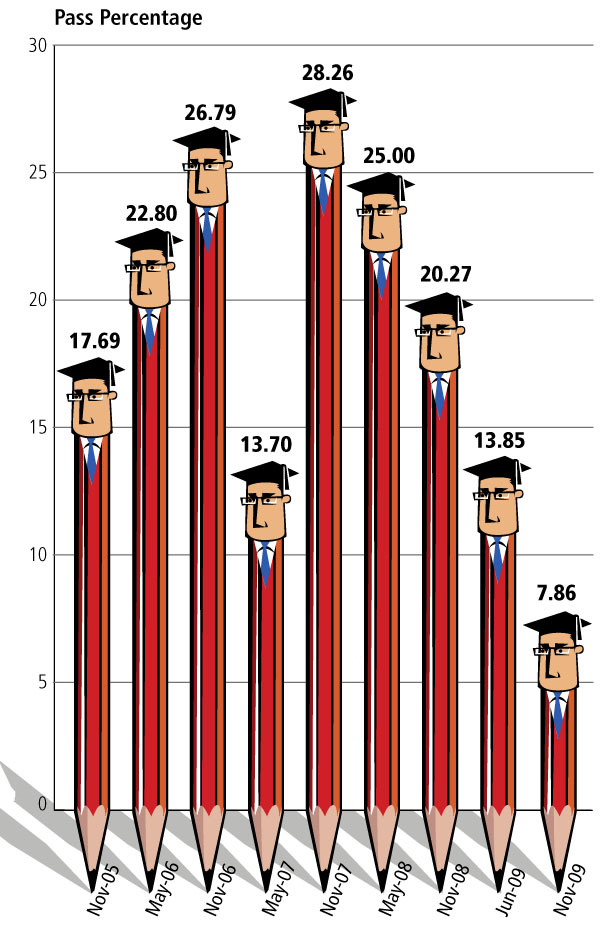 Illustrations: Malay Karmakar
So what went wrong? To start with, accounting was a tough paper, auditing very lengthy and all questions in all eight subjects were made compulsory. Till May 2009, one didn’t have to solve the entire paper. ICAI pushed the bar higher this time around. But, quite a few students are attributing their failure not to the question papers but to the economic downturn which has led to over supply of chartered accountants in the job market, implying that the results were controlled. “A lot of companies stopped hiring. Even the ICAI which runs its own placement cell couldn’t place all the students enrolled with it,” says a student who didn’t want to be identified.
Uttam Prakash Agarwal, president of ICAI, rubbishes such claims. “ICAI is not controlling the results. Nobody has the right to spoil the future of students,” he says. “It is the cancer of coaching institutes. Students are being misguided by these institutes and think that they will take coaching for three months and qualify. They don’t even open my course material and have failed because they haven’t taken the exam seriously,” Agarwal adds.
But coaching institutes have been around for decades. Does that mean ICAI had been snoozing until now? Agarwal doesn’t agree. “The paper pattern was more practical this time,” he says. He feels this could also be the reason for the low pass percentage.
Many feel that this is where the larger problem with chartered accountancy as a professional course lies. Compared to other courses like Chartered Financial Analyst or even an MBA with a specialisation in Finance, which are fairly practical in their approach and assessment, chartered accountancy continues to concentrate a lot on ex post facto analysis and rote learning. “Let me just say that the demand for good accountants far outstrips the supply. The course gives a fair grounding of accounting, finance, tax and mathematics. But it could do a lot with what is currently relevant, in terms of applying the learning to actual situations, because the moment it is tested, people flounder,” says Bobby Parikh, Partner, BMR Advisors. ICAI currently doesn’t provide any such training and does little beyond distributing course materials, past years’ question papers and suggested answers.

Correction: This article has been updated. The CA exam is clubbed into two groups of four subjects each and not three as stated earlier.

Show More
Get the latest stories, videos, and podcasts from Forbes India directly in your inbox every Saturday
Thank you for your comment, we value your opinion and the time you took to write to us!
Comments 74