Rise of the Coal Bill

Over the next seven years, 50 percent of India's coal will come from foreign lands. A look at the implications of a $40 billion coal bill

Where Will We Get It From?

00 to 300 million tonnes that the country will need, can be imported from Indonesia, Africa and Australia. Essar Group recently did a $600 million buyout of US-based Trinity Coal. Tata Steel and Riversdale Mining are investing $270 million to develop the Benga Coal project in Mozambique. JSW Steel Ltd has said it may spend $500 million to buy coal mines overseas. Reliance Power has acquired coal mines in Indonesia and Tata Power and Adani Power will import coal from there. Coal and Oil group imports coal from many countries.

How Will We Transport It?

India simply does not have enough port linkages and dedicated freight corridors (DFCs) from the ports to the power plants. The only DFC that is currently being implemented will cater to the needs of west and north-west India. The railways also do not allow private parties to run their own railway linkages from port to plant. This could push up the price of coal delivered to plants far away from the coast, and could also compel them to opt for larger inventories of coal. The railway earns almost 45 percent of its income through coal freight, and supplies it through its merry-go-round (MGR) routings. 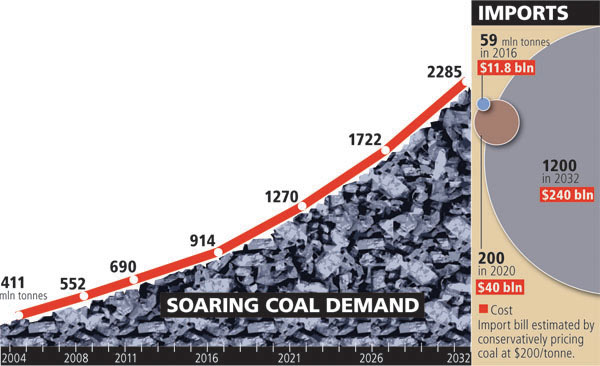 Cause and Impact
Five years ago, it was only coking coal — used primarily by the steel industry — that used to get imported into India. Much of the remaining coal was supplied by government-owned mines like Coal India (CIL) and Singareni Coalfields. Then in 2003, a new electricity policy allowed the entry of private players. According to a report by credit rating agency Crisil, coal consumption has grown at 7.7 percent between 2004-2005 and 2008-2009. The power sector alone now accounts for around 77 percent of the total coal demand. Over the next five years, more than 80 percent of capacity addition in the power sector will be coal-based, resulting in an incremental coal demand of 254 million tonnes. By 2020, the country’s total coal demand would exceed 1.4 billion tonnes, whereas the most optimistic estimate of supply is expected to be around 1.1 billion tonnes (750 million tonnes from CIL). “A three-fold increase in import of coal over the next five years will push the share of coal imports in India’s total import bill to 4.5 percent by 2013-2014. This can add up to 0.3 percent of GDP to the current account deficit if we assume the trade in other goods and services to continue as per recent trends. The overall current account deficit will be around 3 percent of GDP by 2013-2014, in my opinion,” says D.K. Joshi, director and principal economist, Crisil.

Much of the coal supplied by CIL is at notified prices which are half the market prices. CIL allows 10 percent of its coal to be sold with the reserve price fixed at 80 percent above the notified price. So the entire energy sector is split into two parts — one that is market driven, and the other, politically driven. Coal prices are decided by the government, at prices way below market-prices. With 70 percent of the coal coming through market pricing — through imports — the country will face a situation where some players can claim bumper profits just because they have got coal at these discounted prices.

Tweets by @forbesindia
The Business of Schools
Webmail Service: Rapportive