States are setting up run-of-the-river power projects to avoid resettlement issues associated with large dams. But the projects have their own drawbacks 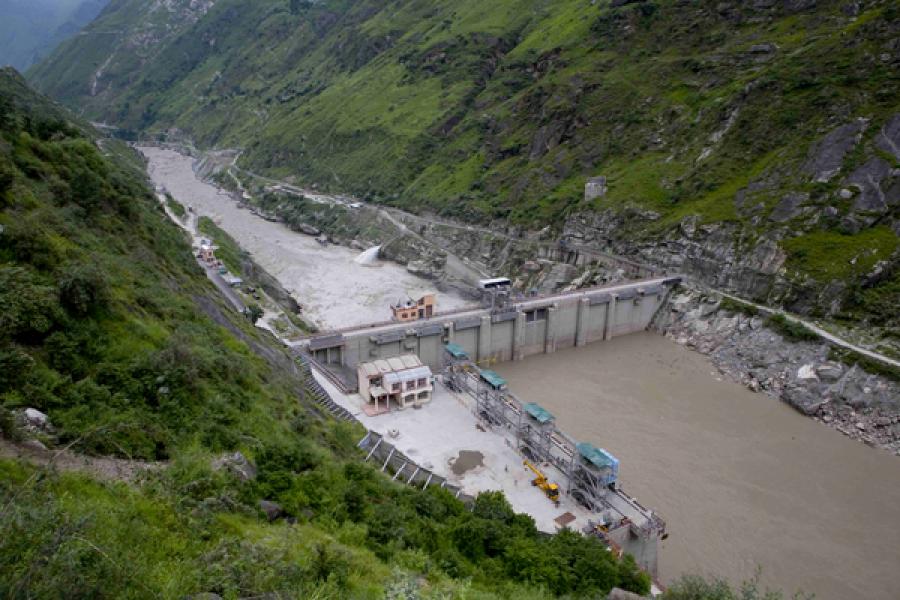 Image: Madhu Kapparat for Forbes India
WITH THE FLOW The Sutlej flows downstream at Jhakri

The Sutlej rises from lake Raks-Tal near Mount Kailash in the Tibetan plateau. It is the longest of the five tributaries of the Indus. As it tumbles through the mountains in the Rampur-Kinnaur region of Himachal Pradesh, its waters feed the 1,500 MW run-of-the-river (RoR) Nathpa Jhakri hydroelectric plant. Picturesque little villages along the lush green banks offer an interesting contrast to the 62.5-metre high dam at Nathpa. The dam diverts 486 cumecs of water to a 27-km-long headrace tunnel that brings the water to the plant to fire up six 250 MW turbines. The water then flows back to the river. These villages offer an interesting contrast in another sense too. Unlike large storage dams that often displace thousands of people, sink large swathes of fertile farmlands and destroy virgin forests, Nathpa Jhakri has not adversely affected the 22 villages scattered around the 395 acre of land that was acquired for the project.

Despite its size, the project has displaced only around 500 families (about 3,000 people if you assume each family has 6 members on average) who were rehabilitated at a cost of Rs. 67 crore, both by way of cash as well as construction of houses at resettlement colonies in Jhakri. In comparison, the 1,380 MW Bhakra dam uprooted 11,777 people when over 3,1191 acres of land was acquired from 256 villages. Even though work on Bhakra started in 1960, rehabilitation is yet to be completed.

And that’s the reason why the RoR Nathpa Jhakri project is a model that most hill states in north and eastern India want to copy. More than 60 RoR power plants are planned in Himachal Pradesh, Uttarakhand, Sikkim and Arunachal Pradesh.

“State governments want to stay clear of land acquisition and any storage project requires a huge amount of funding to support the rehabilitation initiatives,” says an official at the Sutluj Jal Vidyut Nigam (SJVN), which operates the project. He did not wish to be identified.

RoR projects typically store just enough water to produce power for a few hours every day, eliminating the need for tall dams. Commissioned in 2004, the Nathpa Jhakri project supplies power to seven states, including Delhi, and acts as a significant booster in peak hours. The project which was executed at a cost of Rs. 8,187 crore, has already earned over Rs. 6,000 crore by way of sale of power in the first four years since it was commissioned.

Not a Panacea
But here’s a paradox. The country’s largest hydro power plant remains shut for at least 10 days a year on account of persistent maintenance problems and ends up losing around Rs. 9 crore each of those days.

Though RoR power plants appear to be the ideal solution for power generation from water, there are many negatives. First, the turbines have to be regularly serviced, as mountain rivers bring down large amounts of silt, frequently damaging machinery. The Nathpa power plant has had to invest in a workshop, costing over Rs. 10 crore, to keep the turbines working throughout the year. “We consume as many parts in one year as Bhakra may take 10 years to. This has nothing to do with inefficiency but replacements are integral to the design,” says an engineer at the plant.

The second problem is that these projects are on snow-fed mountain rivers that run out of water in the winter months as water in the upper reaches freezes over. “We generate about 37 million units when water availability is at its peak. But in the lean months between October and January, we are able to generate only around eight million units every day,” adds
the engineer.

Another criticism is that although RoR projects are designed to meet peak hour power demand, they often do not live up to expectations. Himanshu Thakkar, a researcher with the South Asia Network on Dams, Rivers and People, says that the power ministry and the Central Electricity Authority are yet to publish data that would confirm that the RoR projects have been able to meet the demand.

“We have been asking them to provide data but they say that no such assessments have been made,” says Thakkar who also says that the electricity deficit in peak hours continues to grow unabated despite the setting up of these plants. Peak power deficit in India jumped from 11.6 percent in 2008-2009 to 12.6 percent in 2009-2010. 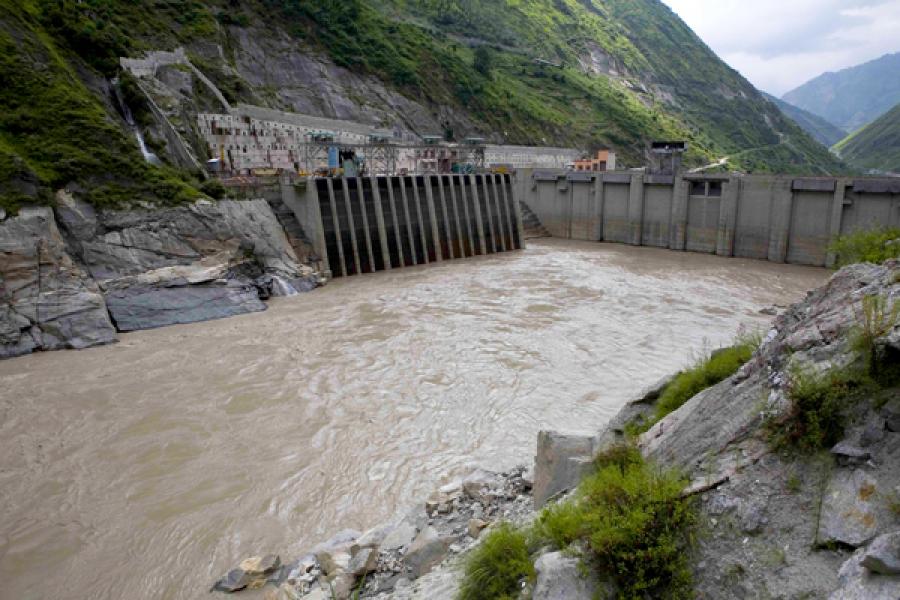 Image: Madhu Kapparat for Forbes India
BEND IN THE RIVER The inlets where the water gets sucked in, desilted and pushed through a pipe to the turbines.RoR projects cause minimum disruption to surrounding human settlements. Despite its size, the Jhakri project has displaced only around 3,000 people
Grey, not Green
RoR projects are said to be more sustainable from the environment point of view. However, activists say that this is not entirely true. According to Neeraj Vagholikar, a researcher who has studied the environmental impact of RoR projects, a case by case analysis is needed to understand the ecological damage caused. According to Vagholikar, RoR projects impact the life and flow of river systems. “In lower Subansiri project in Assam, for instance, our studies show that the dam proposed here would radically alter the flow of the river. As of now, the river flows at the rate of around 300 to 500 cumecs in winter, flowing uniformly through the day. But once the project is completed, we estimate that, in peak winter, the average water flow would be six cumecs for 20 hours and during the peaking power period when the water is released, it would flow at 2,500 cumecs for four hours!” This would lead to a volatile fluctuation in the flow of the river every day during winter. “This project will alternately starve and flood the river on a daily basis,” he says.

Beside, the problem with such projects in India is that many states have started building a cluster of projects around a river and these would significantly impact the normal course of the water as the water gets diverted repeatedly from one dam site after the other.

Of course, concerns have also been raised over the safety of the large dams. A report prepared by the Central Water Commission shows that as many as 29 large dams in the country have been declared as failed between 1917 and 2002. More than 60 percent of such dams are in Rajasthan and Madhya Pradesh. As many as 114 dams are over 100 years old. The main causes behind the failure of the dams have been overflow and in some cases poor quality of construction.

“Dam safety is something that we are looking at seriously and that is why the Dam Safety Bill was put together and approved this year,” said an officer with the Central Water Commission.

“If you want my personal opinion, I would say that we ought to look at building storage projects wherever possible as they are beneficial for irrigation and in flood control. RoR projects should be resorted to only where it is not feasible to have a storage project,” says N.C. Bansal, general manager of the Nathpa Jhakri project. According to an Asian Development Bank report, India has an assessed hydropower potential to the tune of 84,000 MW at 60 percent load factor; out of this only about 20 percent has been developed so far.

RoR projects, which can be quickly built, are crucial for India to bridge the gap between its hydro power potential and actual generation. In 2003, the government launched a 50,000 MW hydro power initiative. Under this scheme, detailed project reports (DPRs) are being prepared for 73 low-tariff schemes. Of these, 70 are located in the Brahmaputra, Indus and Ganga basins in the north and north-eastern part of the country. Most of these are RoR projects.

These projects go through a three-stage clearance process under which the central power sector companies such as National Hydro Power Corporation do the surveys and prepare pre-feasibility reports. At the second stage, more detailed investigations are carried out after obtaining clearances from the Cabinet Committee on Economic Affairs and approval of Public Investment Board and the Cabinet would be sought for construction.

This circuitous clearance route has also at times pitted the centre against states. For instance, when it was decided to put up the Khab Power Plant in Himachal Pradesh, SJVN, the agency given the charge of completing the feasibility study, had recommended building a storage dam. It felt that would have better utility, as it would also then be able to cater to the irrigation needs of the area and help in flood control. But the state government insisted on an RoR project.

“Finally the state government decided to hand over the execution of the project to its own department,” said an official concerned. The reason for that comes back to the problem of land acquisition and rehabilitation. The lack of an efficient rehabilitation and resettlement policy has hobbled the central government’s efforts to build large dams.

“When was the last time you heard about a major storage project being planned? Nowadays all the states want to go in for run of the river projects,” says a senior official with the Central Electricity Authority, a central body that grants clearances for power projects. According to him, although there are a handful of reservoir projects that are planned, there was a clamour for RoR projects. Officials in the ministry of power declined to talk about the issue.