Five years ago, M.S. Dhoni was just a small town wonder. Today, he is an easy leader who bridges the generation gap in his team

Mahendra Singh Dhoni is what millions of small town Indians aspire to be. A boy out of the wilderness who made it big in the bad world of cricket. No pedigree, no pehchaan, just single mindedness towards achieving his goal. And achieve it, he did.

What the Gangulys, Tendulkars, Dravids and Kumbles couldn’t achieve in 13 years, Dhoni did in little over a year: Taking India to the number one spot in Test rankings by beating Sri Lanka by an innings in both Test matches to take the series 2-0. Yes, the naysayers will crib the only reason that India is at the number one spot is because Australia have lost their aura and now the playing field is level. So what? The only reason Australia dominated cricket for over a decade was because the West Indies lost pace in the early 1990s. Times change, get over it. The bottom line is Dhoni achieved what others couldn’t. Oh and just to prove a point, Dhoni is only the second captain in the 132-year history of cricket to have not lost a single match in his first 10 Tests. 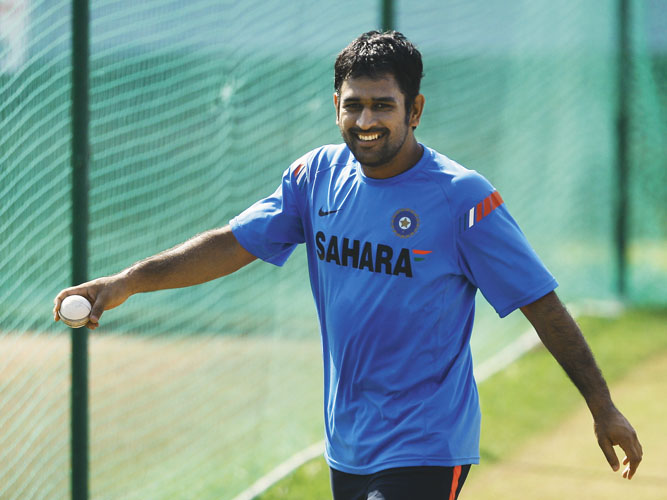 Image: Arko Datta/ Reuters
Leading India to the number one Test spot for the first time ever
Dhoni had been marked out for greatness by Greg Chappell back in 2006. The then chief selector for the national team, Kiran More, recollects what Chappell said, “Greg Chappell had predicted that Dhoni would be captain. He told me, ‘He has such a fantastic reading of the game. He is a future captain.’”
After the disastrous World Cup in West Indies in 2007, the selectors were under a lot of flak. Chappell had resigned as coach. There were calls for everyone’s heads. At this time, a new form of cricket was catching people’s eyes; a younger, more exciting, flamboyant version called Twenty-Twenty or T20. The T20 World Cup, also held in 2007, was a chance for India to redeem itself.
But then all the senior players in the team decided to take a breather from the shortest version of the game. Before the squad was short-listed Sachin Tendulkar, Rahul Dravid, and Sourav Ganguly wrote a letter to the Board of Cricket Control in India asking the board members not to consider them for the tournament. Dhoni was named as captain and thrown into the deep end with names like Rohit Sharma, Yusuf Pathan and Joginder Sharma for company. No one gave the team a hope in hell.
And Dhoni began to shine. Every time the team sagged, he made sure someone stood up and claimed responsibility. Images from that tournament are embedded in fans heads: Yuvraj Singh slamming Stuart Board for six sixes, S. Sreesanth bowling a maiden over to colossus Mathew Hayden and then thumping the ground after bowling him out, Gautam Gambhir, Robin Uthappa and Rohit Sharma scoring half centuries when India were threatening to fall apart. The no-one-can-forget over is the last one of the finals: India against Pakistan. India held its breath. Who was this non-persona Joginder Sharma bowling to Misbah-ul-Haq? Suddenly he claimed Haq’s wicket and India won the match. Everyone was in a delirium. Dhoni went up to claim the trophy. The presenter asked him what made him give the last over to Sharma. Dhoni replied, “I wanted Harbhajan (Singh) to bowl the last over. But he wasn’t confident that he could do it. Joginder said he would do it. He had the confidence. I gave him the ball.” No Indian captain was so frank in public. Even the fiery Harbhajan didn’t bat an eyelid. His nickname MSD, used in constant reference with the drug LSD, suddenly got new meaning. Just like the acid that would take to places you had never been to and encourage you to dream, so did MSD open up new horizons for Indian cricket.
Commentator and cricket analyst Harsha Bhogle says, “It is not easy to be wicket keeper and captain since you can be easily distracted but he seems capable of doing it. He also seems to have an ability to get the best out of people which is critical for a leader.”
Usually when an Indian pulls off the impossible, the BCCI goes overboard and hands over all responsibility to him. Not this time. The BCCI bided its time. It knew it had a gem on its hands. He was allowed to concentrate on the shorter versions. Anil Kumble continued as Test captain. A year later, Sourav Ganguly announced his retirement. So did Kumble. Dhoni captained the Test side for the first time in 2008 against South Africa in Kanpur. India won the match by eight wickets to level the series. He did not go up to receive the trophy. He asked first choice captain Kumble, who wasn’t playing due to injury, to go up for the presentation. It was a marvellous piece of public relations that endeared him to all.

Indian cricket is full of prima donnas. To lead a team of former captains and flamboyant youngsters was a huge challenge for Dhoni. There is no beating around the bush with Dhoni. He doesn’t mince words. When India lost the T20 match against Sri Lanka on December 9 in Nagpur, he accepted blame for the loss.

Aakash Chopra, former Indian opener, says, “He has led a team of superstars fantastically. He has gained a lot of respect from the likes of Sachin and Rahul.”
While the seniors respect him, his faith in the youngsters has paid off. He has backed people like Suresh Raina, Ishant Sharma and Rohit Sharma and it’s paid off. Today India is not short of options in any form of the game. Kiran More credits  Dhoni, “He is the reason why we have such good bench strength. He got in young players into the team and let them grow.”
Maybe that’s because Dhoni has kept a level head. He hasn’t let the media glare and the millions of dollars get to him (He was auctioned for $1.5 million at the 2008 IPL). “It’s very commendable that he still is down-to-earth. I don’t know how he does it. He’s still in touch with all his friends from back home,” says Yudhajit Dutta, former manager and close friend. Dutta has seen Dhoni through a lot of ups and downs. “The only thing that upsets Dhoni is losing. We’ve spoken for hours when he’s feeling low and I know that the next time he goes out he’ll try something different to win,” says Dutta.
When he’s not playing his video-games or riding around on bikes he is working hard on his game. India has always had brilliant batsmen. The quadruple of Dravid, Tendulkar, Ganguly and Laxman were feared by all attacks around the world. The problem was that after them, India didn’t have an enforcer, someone who could change the pace of the game; or if they were dismissed early, no one to take charge and guide the lower order. Dhoni did that. In fact after he became captain, he’s changed his game completely. After 10 matches as captain he averages a little over 68. That makes him the second only to Sir Don Bradman in terms of captains’ averages.
“He likes to do things his way which means he is willing to take responsibility if things go wrong. Also he doesn’t seem too stressed. That is very important for a captain because when things go wrong all eyes are on him,” adds Bhogle.
And things have gone wrong. India crashed out of the T20 World Cup this year and were also sent packing from the Champions Trophy. People began to doubt Dhoni’s Midas Touch. A leading daily spent acres of newspaper reporting trouble between Dhoni and Virender Sehwag. Calls for his head began to emerge. Dhoni remained cool. He led India to wins in New Zealand, West Indies and Sri Lanka.
India may not hold on to the number one position for long. It won’t be for lack of trying though. The next 11 months will see it play just two Tests. Dhoni may lose a few more series’ and the blood calls for his head will resume. Hopefully, the selectors and board will not lose patience with him. He is just 28. Yeh lambi race ka ghoda hai.