In an industry where big-bang acquisitions have become the norm, Anand Mahindra’s buyouts have not been spectacular. But the wisdom in his small deals is becoming clearer now. The year saw Mahindra putting his automotive business in the top gear and preparing for bigger things 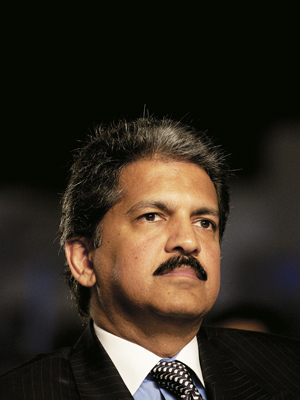 Recently, at a social event, a senior management executive of India’s automotive giant, Mumbai-based Mahindra and Mahindra (M&M), couldn’t let go of his BlackBerry. He was like a fidgety teenager, reaching for his phone every two minutes. Had his boss — the charismatic Anand Mahindra — tweeted him something to follow up on?

Send Mahindra an email, a text message or a tweet, and you will get a response in a few minutes. If you are among the 165,000 followers of Mahindra’s numerous tweets every day, you could be forgiven for wondering if he has time for his Rs. 32,000-crore business empire that spans automobiles, information technology and hospitality.

Yet, this August, Mahindra was squarely where the action was. He was in the fray with European auto manufacturer Renault, bidding for Ssangyong, a loss-making South Korean company that made SUVs. Six years ago, when Ssangyong was up for sale the first time, Mahindra had looked the other way — he had then said it was way beyond his means.

This time around Mahindra clinched the deal and, in the early months of the takeover, Ssangyong is already selling more vehicles and the company seems to be on a financial recovery path. Bharat Doshi, executive director and group chief financial officer, and a long-time colleague of Anand Mahindra says, “Despite the synergy the acquisition would have brought, Anand was never nervous of losing the deal.”

Unlike his contemporaries on the corporate stage — Ratan Tata of the Tata Group, Kumar Mangalam Birla of the Aditya Birla Group or Anil Agarwal of Vedanta Resources — Mahindra’s deals have not been spectacular. For a company of its size, all of M&M’s deals have been less than $500 million. Two years ago, he paid Rs.118 crore to buy two-wheeler maker Pune-based Kinetic Motors. Till then, M&M made only tractors and SUVs — leaving analysts and industry watchers to wonder why Mahindra wanted to start by being a bit player in the two- wheeler industry. An analyst with a broking arm for a foreign bank says, “Spending time on such a small business seemed like a waste for a man running such a large empire.”

Yet, without counting the Jaguar Landrover acquisition by Tata, Mahindra grew his automotive business faster than Tata Motors, India’s largest company. There were two big differences: Mahindra played only in two niche areas — tractors and SUVs; Mahindra did not have access to capital like Tata Motors did from the Tata Group. The Mahindra promoters held only a 25.3 percent stake in the company and there was nothing coming in the way of new equity to leverage a big acquisition. In effect, Mahindra had built a conglomerate without anyone paying attention to where the money came from — he had none. Mahindra’s other telling acquisition this year was a controlling stake in Reva Electric, putting M&M ahead of the curve in the electric vehicle space in India. Analysts estimate Mahindra spent Rs.350 crore on its stake.

A close associate says that in recent years, Mahindra has moved away from the nitty gritty of daily business to take a more supervisory role in the company. He has grown many times in stature — globally — thanks to his association with Harvard and his regular attendance at the World Economic Forum in Davos. The associate says, “Mahindra clearly recognises that he can sow a lot more seeds that will grow much bigger much later, rather than focussing too much on running his businesses.”

Mahindra donated $10 million to Harvard recently to “give back” to the institution that set him on his course. Despite his busy schedule last year, he spent time with visiting students from Harvard Business School, which has now become an annual ritual at M&M. If everything goes according to plan, in the coming years, he will have more to show to visiting students.

Mahindra had once stated that he wanted to be counted as one of the world’s biggest players in tractors and SUVs. At a time when companies such as Toyota and Skoda are beginning to make serious inroads into the domestic SUV market, Mahindra has acquired ammunition that will give him design and technology to fight back. He hopes to use Ssangyong’s global distribution to sell Mahindra products in many countries where they are now not present.