Rajkumar Hirani directed the immensely popular ‘Munnabhai MBBS’, ‘Lage Raho Munnabhai’, and ‘3 Idiots’, which became the highest grossing film ever in India when it was released 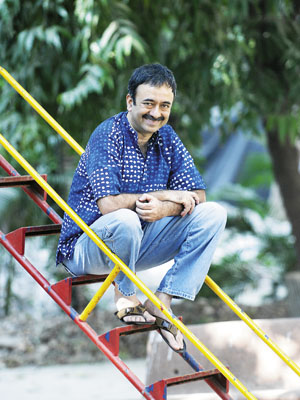 My Mentor: Vidhu Vinod Chopra. I’ve known him for 10 years. We met in 2000 when I edited the movie Mission Kashmir for him.
How he has helped me hone my leadership skills: I understood that the only reason you make a film is because you enjoy making films. And I enjoy the whole process of making a movie.
His advice that has stayed with me: Vinod always used to quote the two principles of [Ingmar] Bergman: One is ‘thou shall entertain’ and the second, ‘thou shall not sell your soul to entertain’.


Back in 2005, when Rajkumar Hirani was directing the movie Lage Raho Munnabhai there was a lot of scepticism on the sets. In a scene, Munna and Circuit are shown drinking and Munna, in his rowdy manner, asks the apparition of Bapu to leave them alone. Friends who dropped by on the sets were worried that Hirani had overstepped the boundaries of Indian sensibilities, especially when it comes to Mahatma Gandhi.

But Hirani didn’t bother much about what people around him said. “I knew that in the larger scheme of things, people will understand that I am not saying anything derogatory about Bapu but just that people should follow his path,” he says.

He was right because Lage Raho Munnabhai went on to become a blockbuster. “That judgement came from a good part of his heart. He understands that the audience is made up of people who want to be good. He respects the audiences’ intelligence and believes that most people are good, god-fearing people,” says Rajeev Masand, a film critic.

If Hirani has been good, his audience has been better. In the last seven years, he has made only three movies, each of which has been a blockbuster.

His last release, 3 Idiots, raked in Rs. 339 crore worldwide. In many ways, after a successful run like that — and in a few cases, even without it — movie makers in tinsel town are known to veer towards cynicism or arrogance. They become predictable and start taking things for granted. But Hirani has remained grounded in reality.

Amitabh Bachchan, who recently worked with him on an Emami advertisement, says, “He is a simple, soft spoken gentleman… with a very high sense of ideals and aesthetics.”

Making an entry into Bollywood wasn’t easy for Hirani. With his roots in Nagpur, as a young boy he started off with dreams of becoming an actor but eventually found his way into the editing course at the Film and Television Institute of India (FTII) in Pune.

After graduating, he started in the advertising industry and followed it up with editing small promos. That’s how he met his mentor Vidhu Vinod Chopra, who gave him his first big break with the editing of the movie Mission Kashmir in 2000.

Incidentally, when, a few years later, Hirani spoke about his movie Munnabhai MBBS, Chopra offered to produce it. “All of us who come from small towns have the desire to make just one film… It was a long time before I made my first film but now that it is done, I am happy in life. Now I want to make just a few films but make them well. I am not in a race to make 40 films a year. That’s not me,” says Hirani.

To a great extent, the quality he describes is evident in each of the movies he has made. “His films are a reflection of his personality; good natured, optimistic and socially relevant. And the thing that surprises me is that Raju genuinely believes in human goodness, which is a very rare quality to have,” adds Masand.

He recollects an incident in 2007, when Lage Raho Munnabhai was being screened at Cannes. The movie had already been released in India and had become a major blockbuster. “Raju was almost like a child, excitedly watching the reaction of the viewers. When an old man touched his feet saying that he was really moved by the film, he was so embarrassed,” says Masand.

Hirani plays down his success and believes that he has been fortunate, as his movies are both critically acclaimed and successful. “When I was growing up, people used to say you need XYZ to make a successful film. They work in the first place because they are unique in nature. When you try and replicate it a second time it loses the steam,” adds Hirani.