Paul Polman: An Eye On The Big Picture

Paul Polman, CEO, Unilever, has re-energised the lumbering consumer goods giant and brought ambition back into the minds of its senior executives 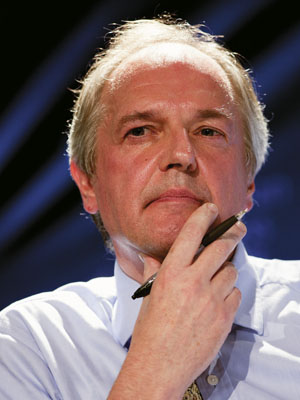 Name of Mentor: I've had many mentors throughout my career, but above all my wife [Kim] and my father have been constants.

How long have you known her?
I've known my wife for 33 years.

How did the two of you come in contact?
We attended the same course at university in Cincinnatti on 'collective bargaining' - something I'm still working on!

How has the mentor helped your leadership skills?
Both my wife and my father have helped me keep my feet on the ground, maintain the right level of humility and respect for others and to retain my integrity.

A few weeks ago, a clutch of institutional investors descended in Singapore for a global investors meet called by Paul Polman, CEO of Unilever, the world’s second biggest consumer packaged goods marketer after P&G. During their visit, the investors would have been impressed by the usual corporate tour of facilities, people and systems. Yet there may have one salient issue that the discerning investors would have picked up: the Anglo Dutch multinational now had more people stationed in Singapore than at its Unilever headquarters at Blackfriars in central London.

This was also the first time that a Global Investors meet had been planned outside London, a clear signal that Asia will increasingly be at the centre of the Unilever world. And Polman has apparently begun asking why they shouldn’t put more resources across Asia in the coming years. “Nearly 40 per cent of our global innovation resources (scientists and R&D folks) are based in Asia (India and Shanghai). Today, we are saying: is it enough? Should we push it up to 60 per cent?” says Harish Manwani, Unilever’s president for Asia, Africa, Central and Eastern Europe.

Asia, and particularly India, has been the traditional grazing ground for Unilever. Except for perhaps China and Japan, Unilever was well-entrenched across South East and Central Asia and Middle East.
But now, Polman is upping the ante. At the same investors meet, he laid down his big, hairy, audacious long-term goal: double Unilever’s revenues from $40 billion to $80 billion. And today, if about half of that comes from developing and emerging markets, Polman hopes to push up the contribution to 70 per cent in five year’s time.

Till Polman came along, Unilever had the image of a lumbering giant, unable to defend its turf against competition. Patrick Cescau, Polman’s predecessor, was gently nudged out by the board even before his term ended. Today, suddenly, there’s a spring in its step. And the man at the centre of it is attracting admirers inside the company. “Paul has put ambition back into the company,” says Leena Nair, director, HR, Hindustan Unilever.

It wasn’t quite perceived that way when he took over as the first outsider to head the company in 77 years. Within months of joining, Polman did the unthinkable: he stopped the practice of offering earnings guidance to the market. It generated a huge uproar among institutional investors initially, with the share price falling 6 per cent. Polman stuck to his guns. His logic was rock solid though: managers ended up sacrificing long-term performance at the altar of short-term, quarter-on-quarter targets. “I discovered a long time ago that if I focus on doing the right thing for the long term to improve the lives of consumers and customers all over the world, the business results will come... I’m not driven and I don’t drive this business model by driving shareholder value. I drive this business model by focusing on the consumer and customer in a responsible way, and I know that shareholder value can come,” he told The Wall Street Journal. Today, the share price is a shade over 19 pounds a share, up from the 16 pounds a share when he took charge in January ‘09.

So far, Polman has scripted his turnaround plan in copy book fashion. In the first year, he has actively engaged with the Unilever Executive (UEX), the highest decision making body inside the company and the top 30-40 executives who run the biggest markets and categories. And he’s travelled widely to each major market, including three trips to India to get a real sense of the consumer and customer issues in each market.

In chivvying up the performance culture, Paul has made significant changes among the top 100 leaders. Executives now have fewer goals and larger variable pay to aim for, says Nitin Paranjpe, CEO & MD, Hindustan Unilever. And early on, Polman injected a sense of urgency by demanding that the teams draw up 30/60 day plans to quickly resolve any prickly issues with brands in the market. These quick wins helped steady the ship, even as Polman went about co-creating Unilever’s long-term strategy with the extended leadership team. A few weeks ago, he unveiled the Compass, a simple, one page document that outlines Unilever’s vision, followed by an ambitious sustainability plan that sets stiff targets for performance. Here’s one: by 2020, Unilever will ensure that all its raw materials that it uses will be from sustainable sources, says Manwani. “Paul has placed the spotlight on responsible growth,” says Manwani.

In driving the plan, Polman has led from the front. He responds to emails from his senior executives, often even on Sundays. He follows an open door policy, encouraging employees to reach out to him and he communicates directly with all its global employees through email and videoconferences. He shows no signs of hubris that tend to grip corporate leaders. Nair says Polman knows many of his 150 top leaders by name. Today, the new Unilever culture of openness and performance culture is winning support. Manwani says employee engagement scores at HUL have improved dramatically in recent months. Apart from Unilever’s market share gains in Asia, this is the other real sign that a new Unilever may rise under Polman.