Anu Aga is among the most influential voices promoting philanthropic activity in India. Her calling card: To her, giving means both, money and involvement 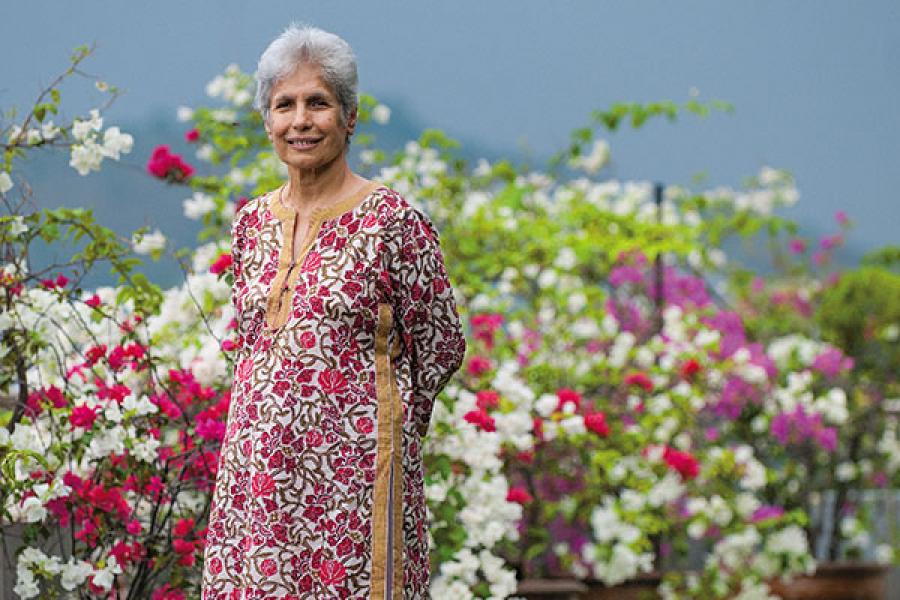 Award: Corporate Catalyst
Anu Aga
Age: 71
Why She Won: For interpreting philanthropy as more than just signing a cheque and for getting personally involved in building philanthropic institutions.
Her Trigger: The death of her 25-year-old son, Kurush, who wanted to give away a big chunk of the family’s wealth to philanthropic causes, prompted Aga
Her Mission: Providing educational support for underprivileged children as well as promoting electoral and governance reforms.
Her Action Plan: Supporting causes which promote primary education (like Teach For India) as well as those which promote better governance like Association of Democratic Reforms (ADR) and PRS Legislative Research


Some people preach a philosophy. Others live by it. Anu Aga, 71, former chairperson of Thermax, is of the second tribe. She walks the talk and, in turn, paves the path for others to follow in her stead. Ask Meher Pudumjee, her daughter and the present chairperson of Thermax. Pudumjee recounts an incident from her childhood when Aga walked in one day with two street children—both boys—and announced that, henceforth, they would be staying with them as part of the family.

Aga’s decision would have left all concerned mildly shocked—but none more than the two boys in question who, ironically, soon left the comforts of her home for the carefree abandon of the streets.

The episode provides a window into the mind of Aga and her approach to philanthropy. As it is normally practised, it typically requires two mutually exclusive sacrifices. One, when a rich person gives money and, two, when others, not as rich, spare their time to utilise that money for social improvement.

But for Aga, philanthropy isn’t ‘either or’: It means doing both. It was not enough for her to provide financial support to the two boys, nor was she comfortable with only counselling them—she had to do what she did.

Over time, this thinking has led her to emerge as one of the most influential voices promoting philanthropic activity in India. Again, it is not just about the fact that as chairman of Thermax (an over $1 billion company today) between 1996 and 2004, she decided to allocate one percent of all profits for charity. Or that the Thermax Social Initiative Foundation (TSIF) today runs nine primary government schools in Pune and Mumbai along with The Akanksha Foundation, an NGO that directly provides education to around 4,400 underprivileged children. Or that she financially supports initiatives like Teach For India and GiveIndia.

“There are very few people in India who are willing to leverage their success in [a] for-profit venture  to lend credibility to non-profit initiatives,” says Vandana Goyal, CEO of The Akanksha Foundation.

A ROLE MODEL
With the disclaimer that she does not want to be judgmental, Aga says most well-to-do people in India get caught up in the race to consume more. “There is one-upmanship among the rich and we are often oblivious of our surroundings,” she says. “Two big examples are our weddings—with 5,000 guests and 20 dishes—and the way women dress!” she adds, comparing them to Christmas trees.

“I think some of us have been blessed with wealth… some of it we deserve but some of it is due to luck and the hard work of many others. I cannot create my own wealth. I depend on so many others,” Aga points out. “In a country like India, where you see that the basic needs of so many people are not being met, do you go on the path of more and more consumption for yourself and the family, or do you share it with the people and the causes that require it?” 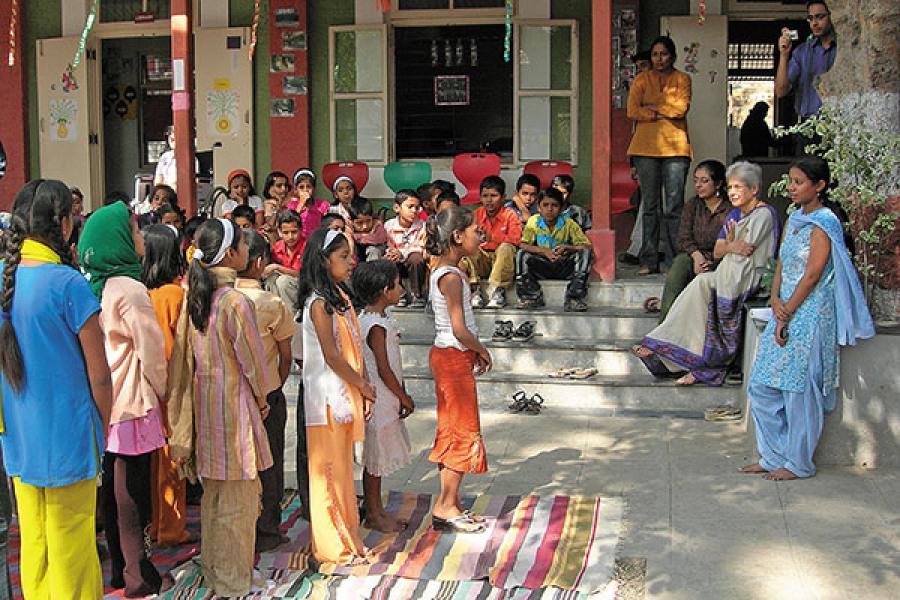 Not that she believes that any one person can change everything. When Aga talks to the well-heeled, she exhorts them to do their little bit—much like she has done. She has singled out education for the underprivileged as the area she is most passionate about and has supported several primary education-related initiatives like Akanksha and Teach For India.

“We all must try to make some difference. Even if it is little, it is good enough because several drops make an ocean. Little drops are not a waste even though they may not make waves,” she says.

It is this seasoned approach that makes her a convincing leader in philanthropy.

“When it comes to philanthropy in India, people today do not know how to give, or whom to give and which reinforces the desire not to give,” says Dhaval Udani, CEO of GiveIndia. “She allays those doubts by lending her credibility to the activities and projects by being deeply involved in those which she has herself vetted and helping to leverage her presence in multiple ways.”

Goyal of Akanksha agrees that it is her real involvement with the activities that is the clincher. For instance, two years ago, a municipal corporator slapped the principal of one of the schools run by Akanksha. The corporator wanted his child to be admitted out of turn. Instead of letting it pass or raising the issue through letters, Aga approached the board and declared that she doesn’t want to run a single school if any one of the people working in them is ill-treated. “But it was all drama. I had no intention of giving up my schools. None whatsoever!” she says cheekily.

This is a manifestation of her deep commitment to the cause that she supports and the level of engagement she has with the people involved. It is this, more than just the money she spares, that distinguishes her as a philanthropist.

For instance, when it came to raising funds through the Mumbai Marathon, she herself took part in it. Similarly, when GiveIndia engaged her to organise a slum tour of Mumbai’s Dharavi for a bunch of high net worth families, she joined it instead of merely organising it. And she followed up by checking the impact in terms of whether people responded, whether they contributed to the cause and how awareness could be spread further.

“While she relies on trust in choosing her NGO, post the choice she yet does a thorough due-diligence with a lot of rigour, with which she ran her company, to the philanthropic space. She is very detail oriented and exhaustive,” says GiveIndia’s Udani.

Jagdeep S Chhokar, founder of Association of Democratic Reforms and former director of IIM-Ahmedabad, says, “She is an outstanding human being who is totally unaffected by her eminence in the business world. I have seen very few people who are completely normal, unassuming, simple and straightforward.”

THE ORIGINS
Despite her training in social work, philanthropy was something that Aga did sporadically, even after taking over as chairperson of Thermax in 1996 after her husband passed away. But it was the sudden death of her 25-year-old son, Kurush, 14 months later that decisively shaped her perspective towards philanthropy.

Her soft, calm voice gains a wistful tenor as she remembers her son. An engineer by training, he strongly believed in giving away wealth to the deserving. One day, Kurush told her that unless she gave away 80-90 percent of their wealth, he was going back to England. “I said ‘go back’ because I hate someone telling me what to do at the point of a gun. That evokes my rebelliousness,” Aga says.

Later he sat down and said, “Ma, I am sorry. The way I said it was wrong. But you are a social worker and I know you are not in the rat race of consuming more and more. Try and think. When there is so much poverty, wouldn’t you like to give?”

Aga promised to think about it.

After his death in a car accident, it was this nagging sense of righteousness that made her actively scout for avenues to effectively bring about change. She says of her son: “He used to scribble beautiful thoughts and one that I distinctly remember is, ‘our conscience is like a mosquito trapped in a net that keeps biting us’.”

Her search took her to Shaheen Mistri, who used to run Akanksha. It was Mistri’s drive that got her hooked to education for the underprivileged. Over time, though, her involvement has made her realise how important education is for the future of India and she has made it her top priority.

“I think she has demonstrated how a successful, driven corporate can care deeply about issues that affect India… She gets personally involved in everything, from mentoring many of us to interviewing new staff to attending our events and training sessions,” says Mistri who now heads Teach For India. “She pushes our thinking on what is possible and always combines humour and purpose.”

DEMANDING ACCOUNTABILITY
Over the last two years, Aga has come to recognise the importance of governance reforms in India. Individual philanthropists can only do so much and, mostly, that is negligible in comparison to what the government spends on social upliftment. “Why can’t industry demand accountability from social sector spending?” she asks. “We have kept hearing since Rajiv Gandhi’s time about how only 20 percent reaches the poor, the rest is lost in corruption and inefficiencies.”

As such, she has been at the forefront of galvanising support for several governance and human rights organisations like Association for Democratic Reforms (ADR), PRS Legislative Research and Human Rights Watch. ADR and PRS received donations from Aga without ever requesting any.

“The financial support happened in an interesting manner,” says MR Madhavan of PRS. One day, out of the blue, he got an email from Pudumjee saying that, as a family, they would want to support what PRS is doing. “There was no discussion,” he says.

Aga feels that if the affluent can’t speak up and if bodies like CII and Ficci can’t bring about change, then who will? “...and if we don’t then we deserve what’s happening,” she adds. “Moreover, it is also in our self interest. For my grandchildren. This country will rebel one day. Right now, people may say ‘this is my karma’ but I don’t see this lasting long. Had I been in their place would I have had the dignity to say that? I don’t think so.”

Her desire for making the system work is matched by her resolve to not cut corners. While going for a meeting at Mantralaya (Maharashtra’s secretariat, in Mumbai), Aga chose to stand on the street and wait for due process to be followed instead of flashing her Member of Parliament I-card to gain entry. This approach is born out of her resolve to allow the system to improve.

Even though she deals with sombre and serious issues, Aga has retained her sense of humour. We saw that while the Forbes India photographer took her pictures during the interview. She appeared bemused and said, “You take so many photographs; I feel I could have been in the film industry!”

Tweets by @forbes_india
Swati & Ramesh Ramanathan: Making Your Cities Work
Most Stimulus Packages Have Been Far Too Small: Tim Harford