In just six years, Outreach, the IT major’s CSR programme, has become an effective platform for improving children’s education in the country, thanks largely to the vision of its global head, Archana Raghuram 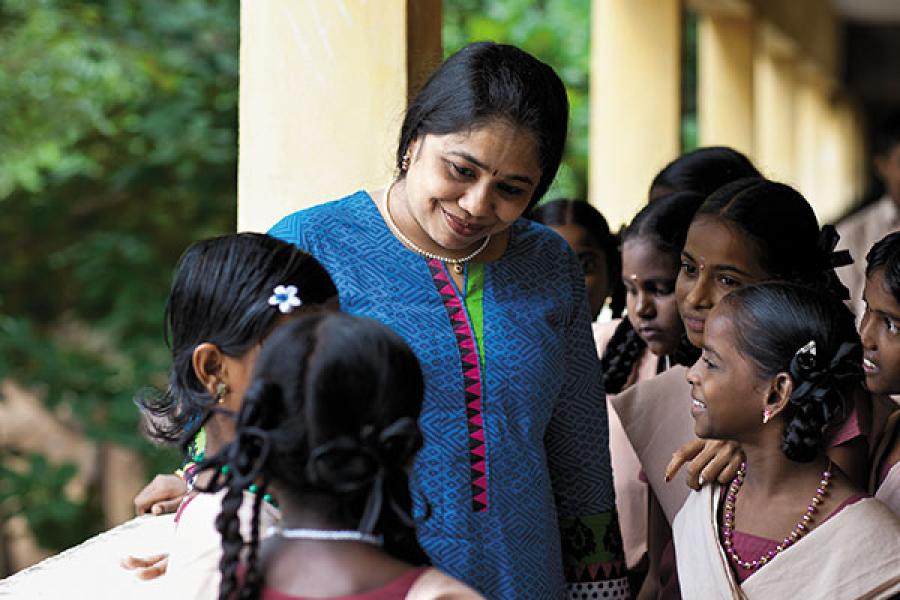 Award: The Good Samaritan Award
Archana Raghuram
Age: 40
Why She Won: For bringing a sense of focus, purpose and outcome in Cognizant’s volunteering efforts in the education space. And for not losing the essence of the grassroots connect between volunteers and students.
Her Trigger: A desire to build a platform that can convince either a fence-sitter to volunteer even for a few hours, or enable a passionate volunteer to deliver more effectively.
Her Mission: To create a self-sustaining and evolving programme that straddles primary school, college education and vocational training.
Her Action Plan: Keep things distributed and bottom-up, not top-down. Work with partners where possible so as to use their expertise to deliver better outcomes.
Her Next Move: Focus on bright students so that they complete college education and land successful careers.

The son of an elephant mahout in Topslip, a scenic spot hidden within the Western Ghats in Tamil Nadu’s Anamalai Hills, Ajith walked 12 kilometres daily to attend the Topslip Tribal Residential School. His first visit to a city was at the age of 12, when he went to Coimbatore to participate in a talent competition a few years ago. There, he won the second prize for his painting of the Great Indian Hornbill, a magnificent bird that is found in South and Southeast Asia, and specifically in the Western Ghats.

But more important than his craft was young Ajith’s motivation—he drew the bird as a manifestation of his sorrow at finding female hornbills and their young dead inside their nests in the forests where he lived. He considered himself the protector of those in his forest.

In the normal course of life, employees of Cognizant were unlikely to come across this wonderful boy. However, since late 2007, due to the tireless efforts of Archana Raghuram, 40, and her band of super-motivated volunteer colleagues, Cognizant has been spearheading a successful and large-scale school education initiative that promises to nurture children like Ajith.

In just its sixth year, Cognizant’s CSR programme, Outreach, has already partnered over 100 schools across India and worked with more than 400,000 students. Over 45,000 of its employees have volunteered 460,000 cumulative hours of effort till date, helping schools and students work towards a better future.

iPods to Outreach
Cognizant’s Outreach programme began to take shape toward the latter part of 2007. Thanks to a newly formed culture of internal blogging and informal conversations within the company, many ‘virtual water coolers’ were being formed across the organisation.

Raghuram, then a delivery manager for a large offshore client, used to run a blog called ‘Legends of Cognizant’. While scouting for interesting people to profile in her blog, Raghuram met employees who were engaged in community service of various forms. “In 2007 alone, we came across over 200 employee-run projects,” she says.

And though the company’s blogging platform had loosely connected various such efforts, Raghuram felt the company ought to provide employees with a volunteering programme. Since most of the existing efforts were already in the space of education, she decided to retain that character. She also concluded that volunteering should never be mandated at any level.

Raghuram put forth a formal proposal before CEO Fransisco D’Souza and President Gordon Coburn. Both immediately agreed, with D’Souza saying, “Each of us in Cognizant, in one form or another, have received the gift of a solid education, which has given us entry into the service industry—one of the best platforms within the global economy. Through the Outreach programme and other CSR initiatives, we will have an opportunity to give such gifts to others.”

Outreach was launched on November 15, 2007, “as we hit the $2 billion revenue mark” as a company, says Raghuram.

Interestingly, Cognizant had given all its employees an Apple iPod when it touched the $1 billion revenue figure. Now, with Outreach, recollects Raghuram, the company had found a way to “give back” to local communities.

Raghuram’s intent was to retain the grassroots passion and personal interest that employees had for their projects; this could not be achieved by passing directives from the top. Instead, Outreach councils comprising 7-10 employees were formed in each Cognizant location; these were empowered with budgets for activities. All the proposals would be supported through volunteerism and approved via these councils.

“In the first year, we had over 200 volunteers from across levels. In many ways, those passionate and motivated employees set the tone and built the momentum for the whole programme,” says Raghuram.

Today, Cognizant has 41 such councils across all its offices.

Sharp Focus on Education
Having decided on education as their focus area, Raghuram decided to cement the work its employee volunteers were doing in and around its office buildings. “Neighbourhood schools were the most obvious places because, in many cases, they were just across the road. The first school we partnered was Thoraipakkam High School, just across our first fully-owned facility in Chennai,” says Raghuram.

In the early days, the focus was on repairing or rebuilding the decrepit infrastructure in schools. Many companies had donated personal computers to these schools which would lie dusty and unused in dark rooms with no electricity, networking or teachers. The schools requested Cognizant if it could instead do something on a more sustained basis.

“After we invested in establishing computer labs and getting them operational, we had our volunteers teach the students English and Computers on a weekly basis. That led to a 100 percent pass result for the school in class 12 examinations,” says Raghuram. 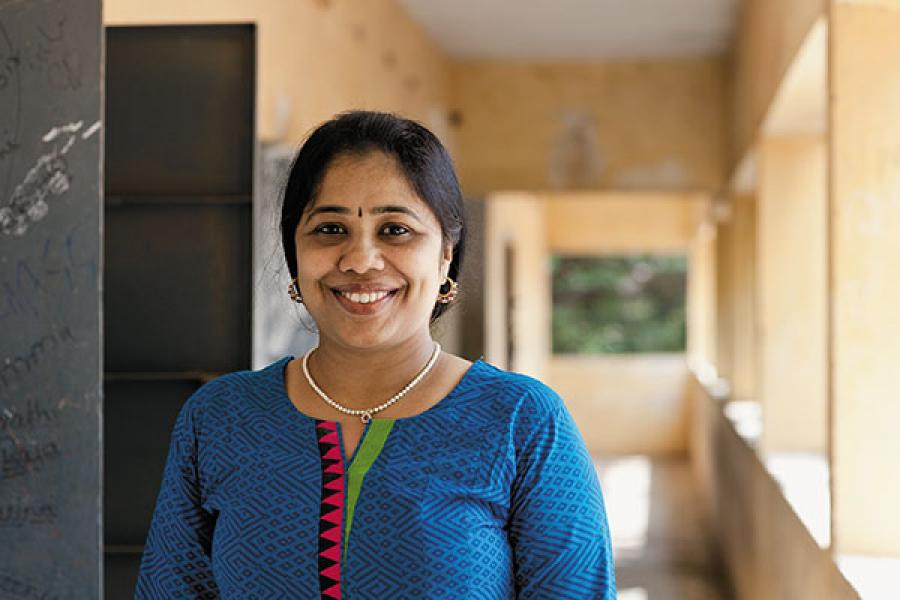 Image: Raju Patil for Forbes India
With the infrastructure and initial teaching taken care of, the programme moved towards bringing together the schools it was associated with under the TalHunt inter-school competition. Nearly 30 schools would participate in 2008, allowing children to sample extra-curricular activities like chess, elocution and dancing. A championship trophy was instituted for the school winning the maximum prizes. “For many of our volunteers, it was like winning their own ‘Project of the Year’ award!” says Raghuram.

“We told them to promote and replicate TalHunt, as it involved volunteers meeting children and timelines. In our experience, most successful volunteering programmes are those around children and education because volunteers can see the impact very clearly,” says Latha Suresh, a director with the Centre for Social Initiative and Management (CSIM), an organisation promoting social entrepreneurship training programmes that was mandated to conduct ‘social audits’ of Cognizant’s work.

Continuous Evolution
After the first few years, Raghuram and her team (she is supported by a full-time group of 20 employees) realised that Outreach needed to monitor and understand their students’ progress better. From the CSIM audits, Raghuram found out that 80 percent of school principals said children developed an interest in extra-curricular activities after TalHunt; teachers said they were better able to understand the latent talents of their students while 89 percent of parents felt their children’s performance had improved because of the volunteering by Cognizant employees.

But as they progressed beyond those statistics, Raghuram and her team saw that, in many schools, the biggest problem was differential learning levels. “There were students in class 10 who could barely read the books prescribed for class 5,” she says.

According to the Annual Status of Education Report (ASER) produced by Pratham, an NGO working to provide quality education to the underprivileged children of India, 53 percent of class 5 children in 2012 could not read class 2 text books, while 46.5 percent of children in class 5 could not solve simple two digit subtraction problems.

This is when Cognizant decided to deepen its focus. Beyond the time they spent teaching children, they started to look at training educators and empowering parents to assess their children’s progress. “We want to make sure that in our 100 schools, the children are performing at expected levels,” says Raghuram.

TalHunt itself is being changed into a four-month-long activity involving sports, quizzing and mathematics, so that children have more time to be trained and coached.

To improve the quality of in-classroom education, Cognizant partnered with Kriyative, an educational content provider, to provide standardised material for classes 1-7. Each Cognizant volunteer gets a 45-minute module for every class, with pre- and post-assessments.

“That way, employees don’t have to spend a lot of time preparing and deciding what to teach in one hour; they can concentrate on the teaching itself,” says Raghuram.

The Future
Into its sixth year now, Outreach has reached that point when it needs to think about the career outcomes of its school interventions. To this end, it has partnered with Junior Achievement (JA), a non-profit global organisation that helps guide school children towards conscious career choices.

Through the involvement of over 2,000 Cognizant volunteers, more than 100,000 students have signed up for the JA assessment programmes that help understand what career choices exist and what they might be interested in. For classes 9-12, they explain how there are options beyond becoming an engineer or a doctor—for instance, marketing, gemology or advertising. To sensitise conservative parents to newer career choices, a new programme that was tried out in a school in Coimbatore had class 12 students send postcards to parents describing their aspirations. In most cases, that is how parents realised what their children really wanted.

On discovering that just 5-6 percent of girl students were going to college, even though 75 percent of the class 12 toppers were girls, Outreach has also added a significant scholarship programme to fund deserving students through college. Last year, 124 students were funded in partnership with Foundation for Excellence, an organisation that provides scholarships of its own to poor students.

“They don’t want to reinvent the wheel and prefer to work with partners where possible. And Archana is very committed and sincere, and makes a lot of time for Outreach,” says Sudha Kidao, managing trustee of Foundation for Excellence.

This year, Cognizant is looking to distribute between 230 and 250 scholarships.

Of the 124 students, 98 percent were the first graduates in their families, including the daughter of a polio-affected telephone booth operator; she is currently studying for her engineering degree at Anna University. “Archana and her team bring engineering and problem-solving abilities to the fore, thinking through most processes, especially ‘what’s next’. At times, her team feels like an NGO within the organisation!” says Kidao.

Get the latest stories, videos, and podcasts from Forbes India directly in your inbox every Saturday
Thank you for your comment, we value your opinion and the time you took to write to us!
Comments 23