I blame all govts for the slow pace of reforms: P Chidambaram

Former union minister P Chidambaram rues the fact that India did not have an unbroken period of reforms since the economy opened up in 1991. He says the government must stoop if it has to conquer 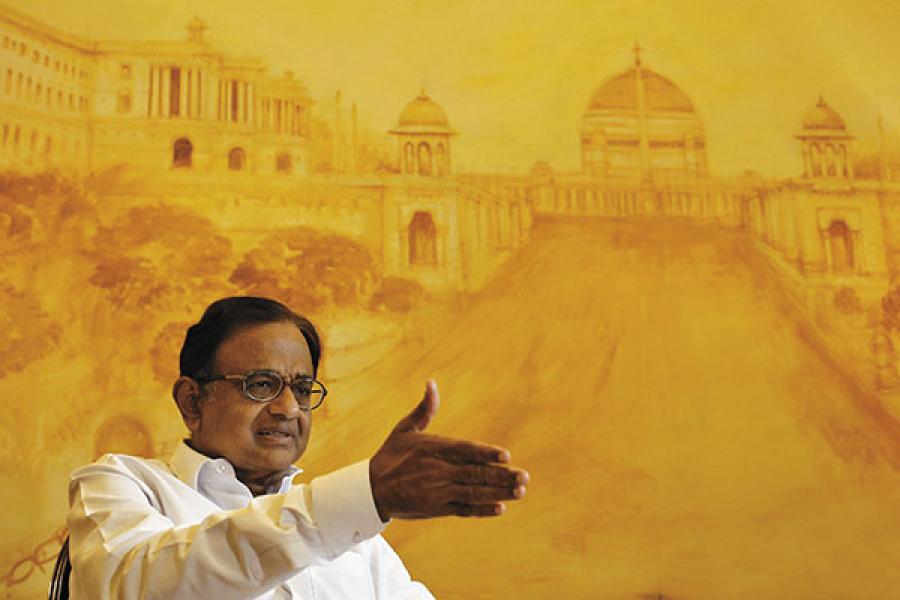 P  Chidambaram, who has had the longest tenure as India’s finance minister, now exercises his role as an opposition leader through his weekly columns in The Indian Express. His latest book, Standing Guard, is a compilation of the columns published in the newspaper in 2015 and captures the state of the country as he saw it. Chidambaram, who was in Mumbai recently to launch his book, spoke to Forbes India about its content and his views on the performance of the BJP-led National Democratic Alliance (NDA) government. Edited excerpts:

Q. In your book, you have said that the biggest failure of the “pro-business” NDA government is the “moribund state of the private sector”...
The NDA government is regarded as a pro-business government. The BJP is regarded as a pro-trading community party. Big businesses overtly supported them in the elections and gave them big money for their campaign. Yet, today, if you talk to businessmen, they will tell you that they are disappointed. Every businessman has told me that if he is investing a rupee in his business, he will first try to invest that money outside the country. That is why the chief economic advisor confesses in his analysis that two of the four engines of growth—private investment and exports—have virtually stopped. Somewhere, the government seems to have lost the plot in understanding what businesses need.

Q. Would you subscribe to the view that this government is taking small steps, like transparency in allocation of natural resources or the Ujwal Discom Assurance Yojana (UDAY scheme), which will lead to a bigger picture at some point?
I don’t deny it. The UDAY scheme is nothing but phase-II of a similar scheme launched by the UPA. Only six states signed up then. If more states are signing up today, I congratulate the government. Take, for example, natural resources. The decision to auction coal blocks was taken by the UPA government, but it was not implemented and we paid a price for that. The decision to auction is a welcome one, but the follow through is poor. As I learn, of the 42 coal mines that were eventually auctioned, only two are operational today.

Q. You are a big votary of fiscal discipline and in your book you talk of how Greece has become a failed nation (economically) by ignoring it. Do you think the 3.5 percent fiscal deficit target for 2016-17 is achievable?
The 3.5 percent target is eminently achievable. In fact, the 3.9 percent for 2015-16 was easily achievable too. Why did they make it appear to be a Herculean effort is something I do not know. I have complimented the finance minister for accepting the views of those who argued for adhering to the fiscal deficit target of 3.5 percent. For 2017-18, he must reach three percent. But I have pointed out that the fiscal math is puzzling. How they have achieved this 3.5 percent is not very satisfactory. There is a huge extra budgetary resource (EBR), which is borrowing, in the ministry of railways and ministry of road transport. Something like Rs 59,000 crore is being borrowed by the ministry of railways and Rs 59,000 crore by the ministry of road transport. Analysts are going to add this Rs 1.18 lakh crore to the fiscal deficit. Therefore, while I compliment the finance minister for adhering to the fiscal deficit of 3.5 percent, I will urge him to look into the manner in which it has been achieved.

Q. You take a lot of pains in the book to explain how the economy began to turn around in the last year of the UPA government’s tenure and debunk the BJP theory that it inherited a broken economy.
I was part of the UPA government. Whether as a finance minister or not, I am collectively responsible [for the government’s decisions]. Between 2008-end and 2011, we went into a fiscal expansionary mode. That is what the textbooks said. The answer to a recession is to spend more, which is what the government did. But the consequences were 14 percent inflation, 6.5 percent fiscal deficit and $88 billion current account deficit. When I came back to the finance ministry [after a three-year stint as home minister], my job, as I saw it and the prime minister concurred, was to put the economy back on track, which we did. By the time we left office, the economy was growing at 6.6 percent, according to the Central Statistical Office. The fiscal deficit had been contained sharply in the last two years [of the UPA government] and current account deficit was brought down from $88 billion to not more than $40 billion. But since we were doing a rear-guard action, people felt that we had lost control of the economy. 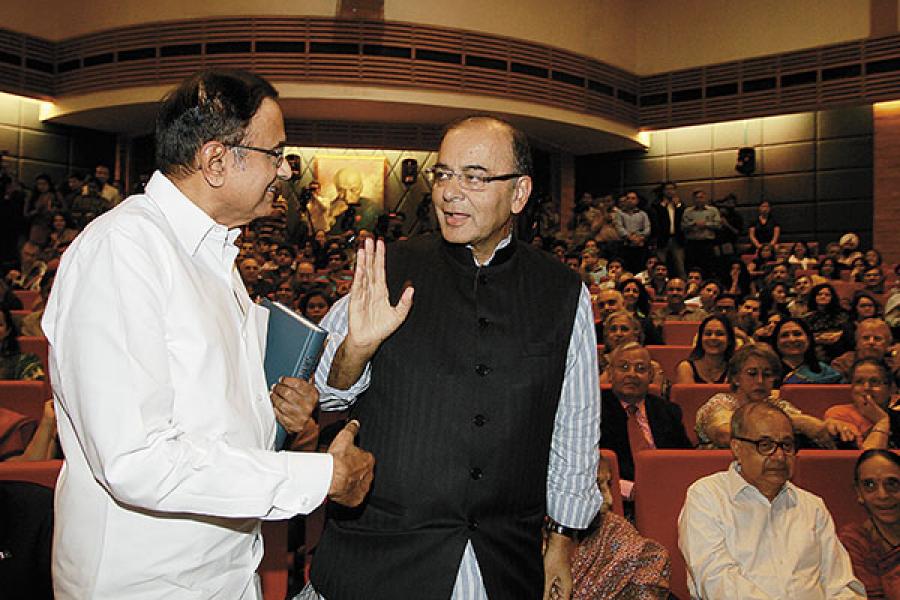 Q. Could this rear-guard action have been avoided if you had not shifted to the home ministry?
Let me say once again that I am collectively responsible for all the decisions even if I had not taken them as finance minister. I think that the first fiscal stimulus was necessary, the second was perhaps avoidable and the third was totally unnecessary. If we had reined in the fiscal expansionary approach in end-2010, we would not have allowed inflation and the fiscal deficit to breach all limits. But this is hindsight and in hindsight, everybody is wise.

Q. In your book, you talk of a section of people in India who think a strong rupee means a strong India...
(Laughs). The prime minister thought so. Even [the current external affairs minister] Sushma Swaraj thought so. They said when we come to power, the rupee will be 40 to a dollar. Now, thankfully, they do not speak about it. Imagine what will happen if the rupee is 40 to a dollar.

Q. What are the key things that you would like the NDA government to do?
There are three major problems. One is lack of aggregate demand, lack of private investment and 14 months of negative exports. These are the three areas which the prime minister, the finance minister and the entire economic team must address. The global slowdown has affected all countries. Nevertheless, China’s exports are still positive and so are South Korea’s and Japan’s. Why is India’s export showing a negative growth?

Q. We are approaching the 25th anniversary of the 1991 liberalisation of the Indian economy. Are you satisfied with the pace of reforms?
No. I blame all governments for this. Once we opened up in 1991, we should have had an unbroken period of 25 years of opening up of the economy. That did not happen. We have had broken periods. Even the PV Narasimha Rao government slowed down in its last two years. The United Front government lasted for too short a period—less than two years—and I did what I could. In the next [AB Vajpayee] government, Yashwant Sinha pushed some reforms, but I think two years of drought slowed him down. He also had to move out and make way for Jaswant Singh. In the Vajpayee government, there were no reforms in the last three years. During UPA-I, we had a reasonably unbroken period of reforms, but the global financial crisis set us back by three years. In a sense, we have been unlucky. We have not had an unbroken period of 25 years of going ahead with reforms.

Q. Where could we have reformed more?
We have to address the financial sector. There is a blueprint—Financial Sector Legislative Reforms Commission. The Direct Taxes Code which I drafted and left behind is ready. The government should improve it and pass it. The government has to stoop to conquer. They have to yield, accommodate views and pass the GST Bill which they are stubbornly refusing to do. The whole area of regulatory reforms is crying for attention. Our regulatory architecture is so fragmented… which is why a chit fund scam falls between two stools. I had to amend the Sebi Act to find an authority to take action. There is so much that can be done, but you must be bold. If you have 282 seats from your own party in the Lok Sabha and 335, including your allies, I think this is a once-in-a-30-year-opportunity. You must seize it and bring about reforms.

Q. Are we sitting on a ticking time bomb when it comes to rising bad debts?
Whenever there is an economic slowdown, non-performing assets (NPAs) will rise. This is true with every country in the world. The wisdom lies in dividing the NPAs into two categories—wilful defaults and victims of economic downturn. In the case of wilful defaults, the government should take firm action. You can’t have a one-size-fits-all policy to deal with NPAs. You will kill both lending and entrepreneurship.