Ramco's Turnaround: Can a new CEO do it?

Virender Aggarwal is effecting a painful change at Ramco. Will he succeed? 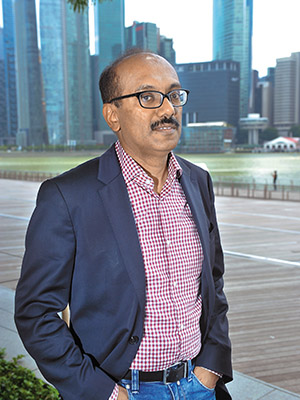 Among Indian tech firms, Ramco Systems has a reputation that its peers only aspire for. Engineers tend to say nice things about its products. Even its rivals speak of how Bill Gates, when he was still the CEO of Microsoft and Microsoft still dominated the information technology scene, launched one of its products. For long, it had the handholding of CK Prahalad, a much-sought-after management guru, because he believed that India could build a global IT product, and Ramco just might be that company.

All well, except for one small detail: Ramco never really made any money. By end of March 2013, it had accumulated losses of Rs 62.9 crore, which may look small, but sits uncomfortably in a company that started product development 20 years ago. The joke among journalists who cover Ramco is that its turnaround story is a never-ending one.

To be fair, Ramco adopted new technologies—solution accelerators, cloud, etc—ahead of its peers. “The most important advice Prahalad gave us was about the clarity and persistence of vision. He told us you can’t compete with the big guys—the market is dominated by five large players—by being marginally better than them. You have to be dramatically different, and give much higher value than the rest,” says PR Venketrama Raja, vice chairman and managing director of Ramco Systems.

Raja believes the payoff time is closer than ever before. “After a long time, Ramco might have got it right,” says Sunil Padmanabh, research director at Gartner, who has been tracking the company and the IT products space for years.

Enter Aggarwal
One of the reasons for the new perspective is a raft of changes at Ramco in the last several months. On top of these changes sits its new CEO Virender Aggarwal, who moved to Ramco in 2012 from HCL Technologies. In many ways, he is the opposite of his former boss Vineet Nayar, who was by many accounts a marketing type—gregarious, hard talking and boldly confident. Aggarwal, on the other hand, is a techie type: He talks in short clear sentences. But he had also displayed enormous business savvy at HCL, growing its emerging markets portfolio to half a billion dollars.

At Ramco, where he has been effecting changes, there are early signs of success. The order bookings, a reliable indicator for software products companies, which were at $2 million in the corresponding quarter a year ago, have jumped to $18 million this quarter. Another metric relevant for Ramco’s global markets strategy, the mix between India and overseas business which was 60:40, has reversed now, and overseas business will contribute 80 percent of its revenues by the end of this year. The most important metric is the bottom line, and his efforts will be measured against how fast Ramco will turn around to sustained profitability.

Meanwhile, Aggarwal’s efforts are being closely watched: His success (or failure) will test several hypotheses that industry watchers have about Indian companies trying to launch a successful software product. Indian companies have not had much success in that. “The issue standing between Indian companies and success in the product space is not one of capability—which they have in droves—but one of proximity. You need to be physically present in the market that will use your product to truly understand the contextual and functional nuances that need to go into your software,” says Sid Pai, partner and president of consulting firm ISG’s Asia Pacific region.

There are some very good examples where Indian companies have built excellent products such as Bancs, Finacle, the On-Mobile product suite, and Tally, but each one of them was originally designed for a market with which their product designers had great familiarity, Pai says.

The Problem Beyond the Product
“Ramco’s problem is not that they don’t have a brilliant product,” a senior executive from a technology company says. “They are probably technically brilliant. Ramco’s problems lie elsewhere.” The marketing head of another technology company says: “The key is not in just building a product. If that’s the case, we will all be billionaires.”

Aggarwal’s own diagnosis of Ramco’s problems is simple: Its products scored low on usability, and it spends too little on marketing. He has been busy setting these things right ever since his arrival. 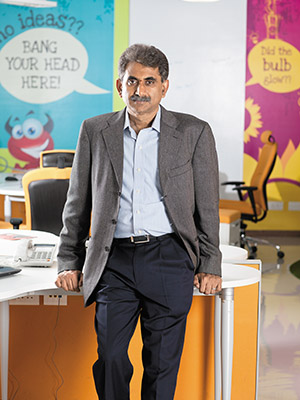 Image: Raju Patil for Forbes India
PR Venketrama Raja, vice chairman and MD of Ramco Systems
The reason why its products scored low on usability had to do with Ramco’s culture. It had always been an organisation dominated by engineers—not least because its promoter Venketrama Raja, a chemical engineer from Madras University, had a passion for products and engineering, and has been closely involved in its operations. (Raja, along with Ramco Industries and Madras Cements, own 68 percent in the company.) And engineers aren’t always the best people to think of products with lay users in mind. So, one of the first things Aggarwal did was to stress on usability. He hired over 20 usability experts (Ramco employs around 1,200 people) and made it known that nothing would go to customers unless the usability team gives the go-ahead.

To score higher on usability means the product has to run on mobile devices which, in effect, means everything has to be on cloud, an area that Ramco was already focusing on. Since Aggarwal’s arrival, all the products are built for the mobile first—and they all have elements drawn from the services that define this era: Facebook, Foursquare, Twitter, and, of course, Google. So, an executive checks into an office using his mobile, enters a data centre or conference room using a QR code, uses the maps on his mobile to check on his customers in that location, much the same way one might check out restaurants and so on. (QR code, or quick response code, is a machine readable code, similar to barcodes, but can store more information.)

Importantly, there is more stress on marketing than ever before. Insiders say that when its products failed to take off in the market, instead of turning more aggressive, the executives turned more inward looking, and instead of stepping up the marketing efforts, started investing less on marketing. That has changed since Aggarwal arrived. The team is practically new. (The story goes that sometime after he took charge, he sent a mail to his marketing team asking for their views on a certain issue. Some responded, some didn’t. He asked the HR department to fire those who didn’t respond, saying, ‘if they don’t respond to their CEO, would they respond to their clients?’) 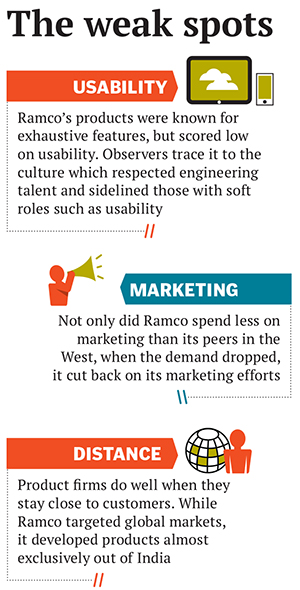 The new marketing office is nothing like the old—bright colours, exercise balls fill up the place, and the cabins are in the process of getting converted to meeting rooms. While Ramco had mostly avoided partnerships for marketing, it has now tied up with Eurocopter, the Franco-German-Spanish helicopter maker. (While Ramco makes enterprise resource planning applications, its focus is on the aviation sector. Columbia Helicopters and Air India are among its customers.) Gartner’s Padmanabh says that during its calls with Ramco’s clients, the feedback has been that it has turned much more aggressive, and that the way it has enhanced its products often draws comparison with SAP or Oracle.

The Crucial Piece of Change Management
Insiders say that these changes haven’t happened without a lot of heartburn. One employee complained that Aggarwal has always been in IT services and doesn’t understand that the products business is different—and might end up destroying the core strength of Ramco, its engineering, by changing too many things too fast.

Aggarwal is aware of the shockwaves that he has sent inside the company, but he believes he has done the right thing. Some time back, Ramco had invited a professor from Harvard, Boris Groysberg, who specialises in organisational behaviour, to help it through the change. The big learning from Groysberg, Aggarwal says, was that change, first of all, should be fast. Do it at one go, and be done with it (instead of letting people speculate what will happen next).

Groysberg also advised the team not to get too emotional about letting people go. “There was a fair degree of shock at the speed at which change took place. But now, the degree of acceptance is creeping in. There has been some pain. But, when we succeed in the market that pain will go away,” Aggarwal says.