How to make a living out of giving your product away 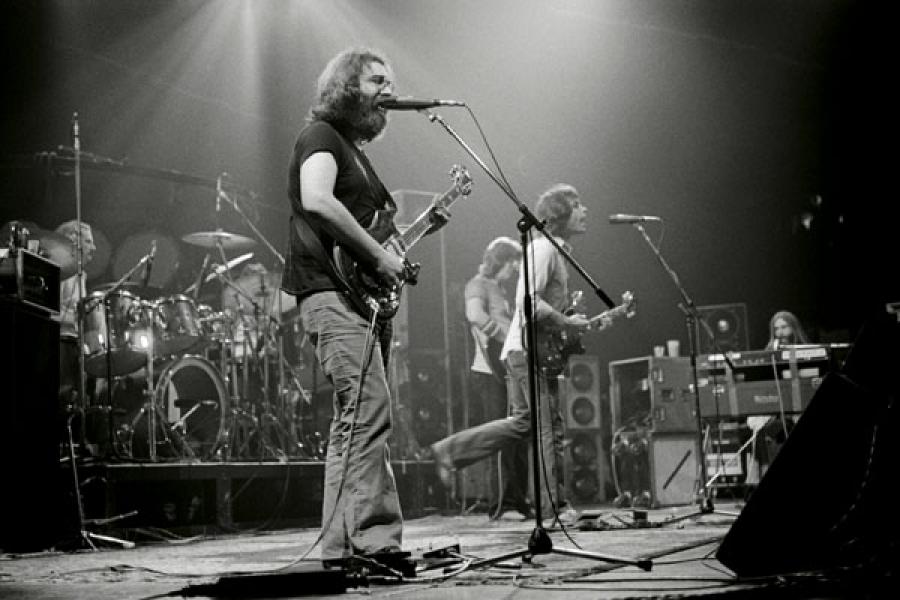 Image: Roger Ressmeyer/Corbis
Mirror shatters in formless reflections of matter
Glass hand dissolving to ice petal flowers revolving
Lady in velvet recedes in the nights of good bye
Shall we go, you and I while we can
Through the transitive nightfall of diamonds?

His mind takes a trip back to the 60s. If he could build a time machine, he’d point it straight at a Grateful Dead concert, then watch the blue smoke spiral into the air, Dark Star immersing him in bright light. That, he thinks, would be the perfect state of mind. Back in the here-and-now, he says, “I can’t think of any other band in the world that can take a two minute song and play it live for an hour and make it sound different and better each time.”

Dark Star (lyrics by Robert Hunter, music by Garcia), is pretty much a representative track for the legendary rock band, one that speaks for its appeal as an acidhead icon. That today, 45 years after its  debut, the band still has many generations of lifelong fans is remarkable enough. But what, perhaps, is unique is that it’s also the subject of serious study by academics and marketers, not least the music industry, where much mental energy is being expended on efforts to curb music piracy.

David Meermann Scott, who co-authored Marketing lessons from the Grateful Dead: What every business can learn from the most iconic band in history, has been talking about the Grateful Dead to the corporate world for a long time. He feels the band members truly understood their customers: “What the music companies are in the process of learning from the Grateful Dead is that the fans ultimately will create your bottom line.”

The studio recording of Dark Star lasts just two minutes. When the band played it live, however, it often extended to almost an hour, with Garcia improvising long guitar solos; every live rendition was unique. Now, factor in over 2,300 live concerts over 30 years, a repertoire of around 500 songs (150 of them Dead originals), and you will begin to understand the loyalty of its fans. Calling themselves ‘Deadheads’, they would go so far as to tour with the band, supporting themselves on the road by selling food, memorabilia and drugs. “Today’s bands are more about the concert and any marketing related to the concert. The Dead shows were more than buying a T-shirt to take home,” says Robin Krieglstein, a California-based entrepreneur who has attended many of the band’s shows.

The Grateful Dead knew that the fans were the key to everything it did. The conventional wisdom was that a band would release records and promote the releases by performing live. The Dead turned this on its head. It not only allowed fans to bootleg its music, it actually helped them record its shows. (It helped that the band, unlike most others of that time, owned its music masters and publishing rights.) There were even special tickets for a ‘tapers’ section,’ where the band’s  microphones wouldn’t get in the sound crew’s (or the rest of the audience’s) way.  Sometimes the sound crew would allow the tapers to directly connect to the console, which naturally resulted in superb recordings. The only condition was that the tapers could not sell these recordings for profit (they could exchange them with other tapers, though). Of all those live shows, more than 2,200 have been recorded by the tapers, and most are now available on the Internet for free.

How did it pay off? Devout fans bought every ticket at its concerts; even today, 15 years after Garcia’s death, when the band name was officially retired, when the surviving band members tour under the name of The Dead, the Deadheads line up, wallets in hand. And it looks like the music industry is beginning to get the message. The billboard charts for 2010 clearly state that touring is the prime fattener of bank accounts. Each and every artist in the top 40 list has made more money touring than from album sales. Vikram Aithal, a mathematician from Mumbai, is one who is convinced. “I think if artists are making money out of tours then they should allow recordings. Music companies are unnecessarily insecure about the loss of revenue.”

Atul Churamani, vice-president at Saregama, begs to differ: “We need to understand here that Jerry Garcia was a genius. He was the ultimate rock star. And whatever he did would have been a success. The point is that the live act model is for the real rock stars. It is not sustainable by everybody.”

In India there are no equivalents of the Grateful Dead; if anyone comes close, it is Indian Ocean. It’s a true blue live act, earning much of its revenues from concerts. Thus far, though, it hasn’t tried taking a page out the Grateful Dead songbook. Though the band members make joking references in their concerts to fans downloading their music, they haven’t actually encouraged their fans to record at their shows; perhaps because their music rights belong to their recording company. But with their new album, 16/330 Khajoor Road, they’re trying out a new model. Starting in July 2010, Indian Ocean is giving away a song a month to its fans, free, via its Web site. Since it owns these songs, is there a chance it’ll allow fans to stick their digital recorders on the stage? “This is a complete possibility,” says Dhruv Jagasia, manager for the band. “We really don’t know how it will work out. But the comparison of our band with Grateful Dead is humbling.”

It isn’t just the music industry that has lessons to learn from the Grateful Dead. The band gave true value to its fan base, while still getting value for its intellectual property. The more concerts it performed, the more tapes were made; the more copies were made of those tapes, the more advertisements were out in the marketplace, pulling in new customers who would further evangelise the brand: Which meant even more ticket buyers for its concerts.

Indeed, one could say that the Grateful Dead’s business model presaged the open source software movement. Programmers grow fan bases for their applications, and make a living doing, for example, enterprise consulting when big companies want them customised for special needs. Happy users evangelise for the brand, the brand works hard at keeping them happy.

Looks like peace, love and rock ’n’ roll has something to teach us in the digital age.