Andalusia Links Spain's Islamic Past To Its Catholic Present 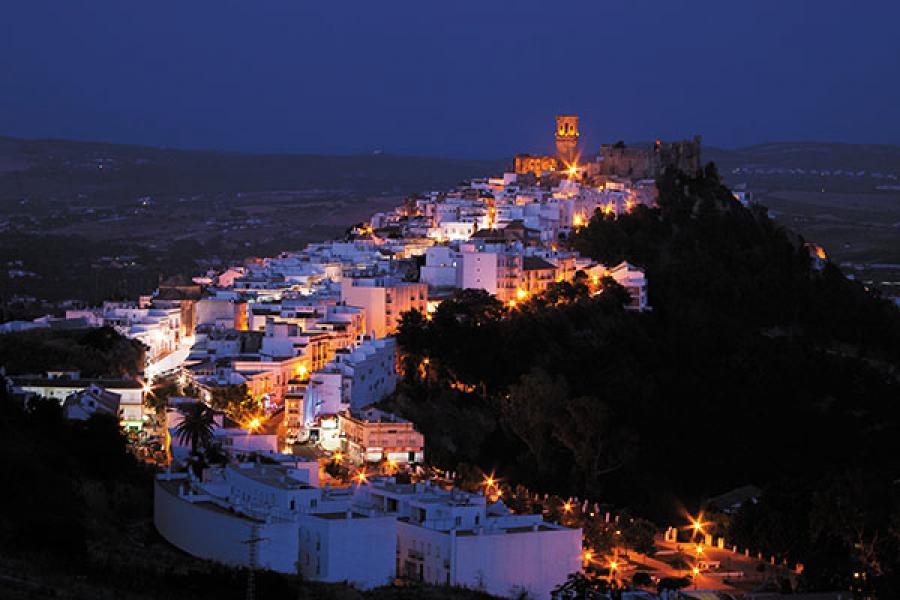 What comes to mind when you think of Spain? Great food and music, tapas bars, football, and a strong Catholic culture. Tucked away in the southernmost part of the Iberian Peninsula, and across the Mediterranean from Morocco, lies Andalusia, a destination that is perhaps not on the average Indian tourist’s itinerary, but which, in many ways, is the embodiment of everything Spanish.

Andalusia is the second largest of the autonomous communities in Spain, and one that is economically poor when compared to the rest of the country. The birthplace of some of the best known aspects of Spanish culture, flamenco and bullfighting, Andalusia is home to people who are fiercely proud of their tradition, culture and way of life.

When compared to the tourist hotspots of Madrid (with its history) and Barcelona (with its art), Andalusia holds its own with some of the finest examples of architecture: Dotted in and around the dusty bull-fighting rings and airy cathedrals from a more Christian era, stand the remnants of the ancient Moorish conquest.

The Moors—medieval Muslim inhabitants of North Africa—had invaded Spain in the 8th century. Their empire stretched north as far as Asturias in northern Spain, where it thrived until the 14th century, when a Reconquista (or reconquest) led by the Christian kingdoms of the north pushed them south and finally out of Spain in 1492. But the Moors’ lasting influence remains not just in the name of the region—Andalusia is a derivative of the Arabic Al-Andalus—but also their exquisite hill-top fortifications in Granada, Málaga and Sevilla. 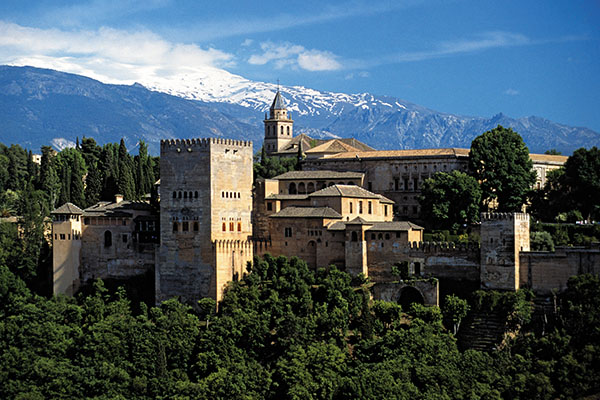 Alhambra, a Unesco World Heritage Site in Granada, and the Alcazaba in Málaga boast forts of magnificent scale, beauty and subtlety of design. Alhambra is a monumental fortress and palace complex that dates back to the 9th century. Restored and rebuilt by one the Moorish kings, it is resplendent with Islamic architectural designs and cues: The Caliphal arches narrow at the bottom like a horseshoe instead of being a regular semi-circle; ceilings are adorned with Muqarnas (decorative brackets) and star patterns in tiled mosaic; Arabic inscriptions are wrought into arabesques.

The university town of Granada is perched higher up in the hills, set against the Sierra Nevada mountains, than Málaga’s Alcazaba, and is far cooler. What sets the Alhambra apart from most other palaces in the world is the fact that it is open to visitors at night. Views of the city lights under the night sky, from a height of about 120 metres, with fires from gypsy caves in the distance, are breathtaking. Getting a day-pass for entry to the gardens and touring the palace after dusk is the best way of getting a moonlit tour: Exploring the palace with your friends and a bottle of Sangria for company is one of the many little-known experiences Andalusia has to offer.

At the Alcazaba (Arabic for citadel) of Málaga, which dates back to the 11th century, water forms an integral element of architectural design. Man-made streams, stunning in their simplicity, run the length and breadth of the fortress and serve very well the purpose for which they were built—to bring comfort from the scorching mid-day heat. The mini-aqueducts connect quaint courtyards with grand gardens under crisscrossed arches and portcullises. You could mistake it for Agra, until you climb the outer wall and look down: Sprawling out beneath you is a bustling, noisy European city, with modern freight ports, cavernous football stadiums and cobblestone streets, all at contrast with the serenity of the fort. 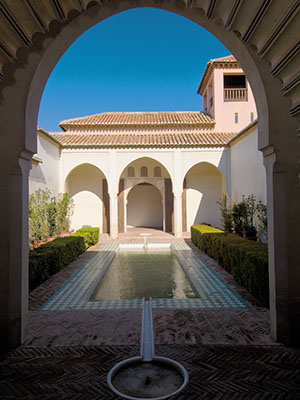 Image: Axiom Photographic / Corbis
A courtyard In Alcazaba
These architectural features are similar to Islamic monuments around the world, but what sets the Andalusian forts apart are their stark contrast to the architecture of Christian-inspired buildings—with their arched galleries, large facades and stained glass paintings—that make up most of Spain.

This unique blending of cultures from Europe and North Africa, of different ages in history, of the old and very old—much like what we find in India—is one of the reasons why Andalusia should feature on the Indian traveler’s itinerary. This juxtaposition—expressed through art and architecture—makes the trip worth it.

An evening out
It is common for holiday-makers on package tours to swarm the beach resorts of the Costa del Sol, but Andalusia’s real charm lies within the narrow lanes of its cities. You experience it when you buy Morcilla, the local sausage stuffed with pig’s blood, rice and spices, at a local deli; or spend an afternoon sipping deliciously cold beer along the winding streets of Albayzín, a quaint old district of Granada. It’s a unique vibe that you don’t get in Madrid or Barcelona.Andalusians fiercely preserve the remnants of their culture and are perhaps more resistant to modernity than any other group in Spain. The people share a love for a particular kind of life that they passionately cling to, because it may not be around for much longer. It’s as if ‘being Andalusian’ is enough of a cause to rally around when faced with the challenges of a 21st century Europe and a globalised world.

In summer, the region can be hot. Mumbai hot. It is one reason why the Spanish are like us Indians: We both prefer to spend searing afternoons asleep indoors, after a big meal. And as twilight descends, there is a tangible happiness that begins to suffuse the air; the atmosphere changes as the heat of the day sets with the sun. 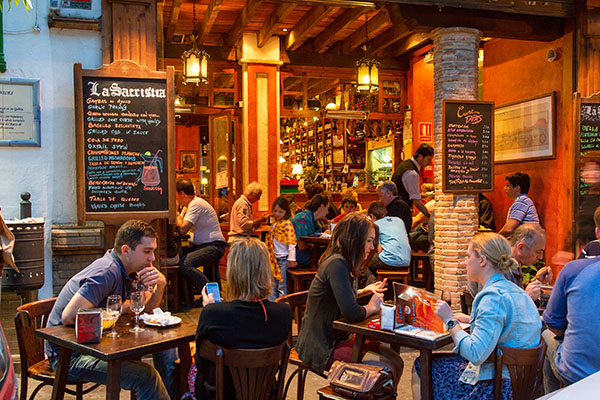 You could begin your evening around 7 pm, going from tapas bar to tapas bar. With each glass of beer or wine, you get a plate of ham, sausages or something more exotic, on the house. What makes it different from bigger cities in Europe is that you get it all for just €2. The chef brings it to your table and, if you ask in Spanish, will take the trouble to explain what he’s brought, where he’s sourced it from and how best to enjoy it. There’s a sense of intimacy and community that is nurtured and cherished here.

You can, of course, order your own tapas that are served in little clay bowls or pots; you might as well close your eyes and pick something because whatever it is you pick will be steaming hot and superb: Braised beef in rich garlic-tomato puree, cuttlefish drunk on white wine, scallops sautéed with pancetta and mushrooms, crispy potato croquettes filled with chorizo and cheese, calamari seasoned with just lime and rock salt, a cocktail of diced prawns and crab swimming in a cool vinaigrette. And all this for less than €20. As Anthony Bourdain says, the best food in the world is no longer in France; it has crossed the Pyrenees into Spain.

There are many stories on the origins of tapas, but a favourite is the one in which it was the name of a small saucer kept atop a glass of wine to prevent insects from dropping into it. One day, the bartender put some bread and ham in the saucer, and tapas was born. Since then it’s exploded into a myriad of small dishes that accompany a drink. The other classic Spanish dish, Paella, is sadly usually overpriced and, unless you know of a great place, best avoided in tourist areas. A seafood Paella will cost you €25-30 in central Málaga. 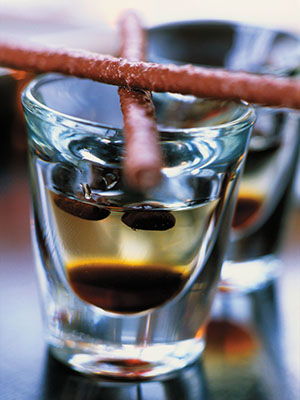 Image: Peter Cassidy / Corbis
Sambuca liqueur
After feasting on tapas at the local bars, it’s time to watch football at 10 pm: A cold San Miguel, a cramped, partisan bar, the game flickering on a tiny TV in the corner is the way to do it. The food that accompanies the drink is a simple, spicy lamb sandwich. By midnight it’s time to hit the Chupiteria—a bar serving only shots: 300 different kinds of shots with every combination of alcohol you can think of. The chili sauce Sambuca (€2.50) is particularly good. Nearly everything in southern Spain is cheap, giving you more room to indulge yourself than you generally would on a European holiday.

If you are still so inclined, you could head to any of the nightclubs that, bizarrely, get full only around 5.30 am. This ‘lateness’ is typical of southern Europe. The Spanish eat their meals at least three hours later than in most other countries: So, lunch in Barcelona is at 4 pm, and only the solitary British family will grace a restaurant at 7 in the evening. Dinner doesn’t even begin before 11 pm.

A week in Málaga and Granada showed that although the Spanish are not detached from the realities of modern Europe—there was an ‘Occupy’ camp in Granada, set up like its cousin in Wall Street—they are much better at enjoying life’s pleasures. This becomes particularly apparent on balmy weekend evenings, when anti-EU placards are replaced by acoustics guitars. No expenses are spared for the floats of the Virgin Mary that sail through cities during Easter, no matter how bad the unemployment numbers are. The fiercely proud locals will celebrate the day of their saints with just as much gusto as they protest the poor economic conditions they now endure.

You get a very real sense of ‘it’s us against the world’ from the people. Unable to come to terms with unemployment, immigrants and economic recession, they fall back on their idyllic lifestyle and traditions they know and love best. 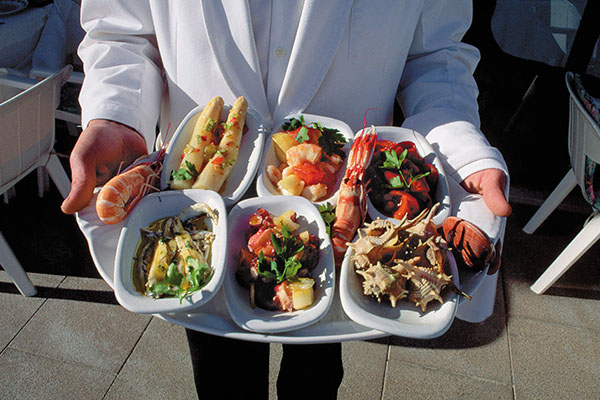 Not picture perfect
The romantic day dream tourists live through in Andalusia is far from reality for many. The numerous immigrants, many of whom can be seen selling trinkets on the streets, live in squalor, far from the tourist haunts.

Between the tanned party-goers and the churches, you will find buskers and vendors from all over the world. Many came to Spain during the real estate boom of 2000-08, looking for jobs in construction. Now that the industry has collapsed, they do odd jobs and are not always welcome. It came as a surprise when my Spanish friends called the local grocery store “el Chino” (the Chinese). Almost every corner store is run by a family of polite Chinese immigrants who speak perfect Spanish.

Tomatoes—Spain’s great export—are farmed in inconspicuous greenhouses by an increasing numbers of African immigrants, many of whom are illegal. Moroccan and Tunisian tea-houses and spice shops have popped up near the mosque in Granada and have transformed some of the run down streets into colourful Arabic bazaars.

Tweets by @forbes_india
Anand does not allow sentiment to enter business: Keshub Mahindra
The Makings of a Leader: Excerpt from 'Gandhi Before India'