Ray is a reincarnation of Tagore. A true renaissance figure, says Soumitra Chatterjee 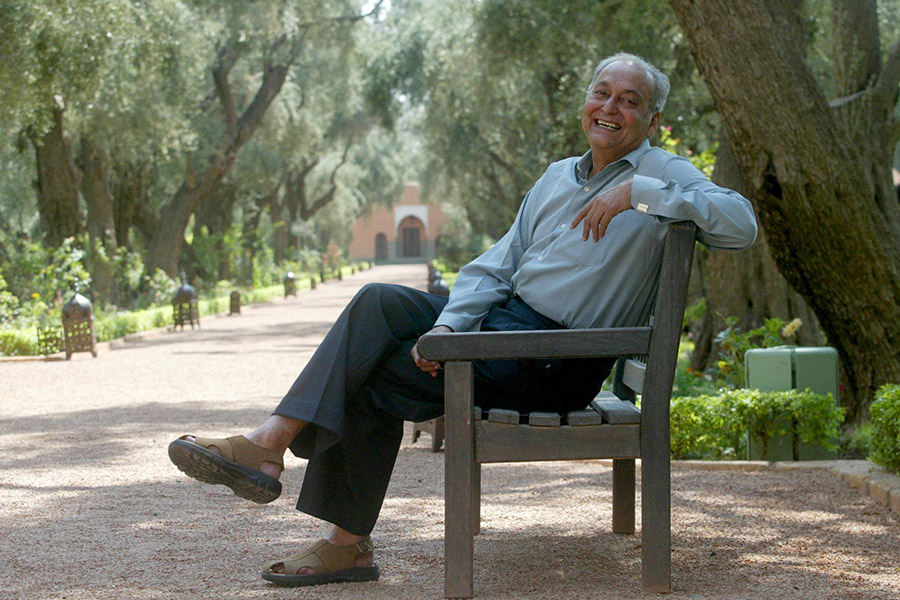 One of Satyajit Ray’s principal actors, Soumitra Chatterjee has worked in an astonishing 14 of his films over a period of more than 30 years, starting with Apur Sansar in 1956 and ending with Shakha Proshakha in 1990.
Apur Sansar is the last film of Ray’s Apu Trilogy (adapted from Bibhutibhushan Bandopadhyay’s classic Pather Panchali), that had a 21-year-old Chatterjee and a 14-year-old Sharmila Tagore as lead characters; both began their acting careers with this film, which captures the life and travails of Apu as a young man in Kolkata (then Calcutta).
Among the 14 films in which Ray and Chatterjee worked together was Ghare Baire (1984), perhaps the most demanding of Ray’s work for non-Bengali audiences. Adapted from Rabindranath Tagore’s novel, the narrative is set in an emotionally charged atmosphere and meanders from the diaries of three protagonists: Nikhilesh (played by Victor Banerjee), his wife Bimala (played by Swatilekha Chatterjee), and her lover Sandip (played by Soumitra Chatterjee). An intense love triangle, the real conflict arises from the upheaval of choosing between loyalty to the nation and allegiance to the British government.

One of the most sought-after actors in Bengali cinema, Chatterjee has worked with eminent filmmakers such as Tapan Sinha, Mrinal Sen, Asit Sen and Ajoy Kar. But his centrality to Ray’s films remains unique, reminding us of another celebrated association: Japanese director Akira Kurosawa and actor Toshiro Mifune.

Having graduated in Bengali literature, Chatterjee’s passion for poetry, literature, and theatre is apparent. As a student, he was tutored by theatre thespian Ahindra Choudhury; another giant of the Bengali stage, Shishir Kumar Bhaduri, also took him under his wings for a few significant years. Despite a fulfilling career in cinema, theatre remains Chatterjee’s great passion and he acts on stage frequently till date. 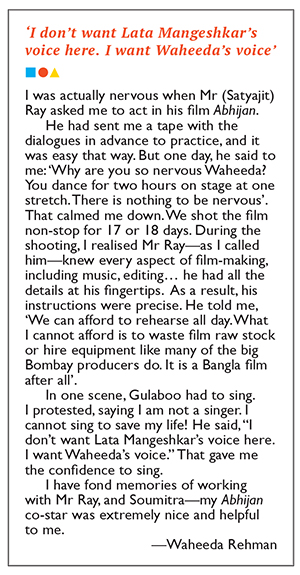 The countless prestigious honours he has received include the Sangeet Natak Akademi Award (1998), the Padma Bhushan (2004) and the Dadasaheb Phalke Award for lifetime achievement (2012). At 80, Chatterjee is a living legend from an era of artistic narrative cinema. Excerpts from an interview with the actor:

Rinki Bhattacharya: Soumitrada, you have worked in 14 films with Manikda [Satyajit Ray]. That is an amazing record in the history of film casting! It is in fact a benchmark, the maximum number of films any single actor has made anywhere with one director. I believe you were nearly cast as Apu in Aparajito [the second film in the Apu Trilogy]. The tempting question is: Did Ray watch you perform on stage? How did Satyajit Ray discover Soumitra Chatterjee?
SC: That is right. I did 14 films with Manikda. There would have been a 15th film—Uttoron. But he fell seriously ill just as it was ready to go on the floors. His son Sandip Ray completed the film after he passed away.

How was I discovered? That is too well known a saga by now. The story, however, deserves to be repeated! When Aparajito was announced, many of Manikda’s unit members were all over town looking for a suitable Apu. Nitai Dutta—he came to work with Hrishida [Hrishikesh Mukherjee] later—is a friend of a friend. He came home to see me. That very day, he took me with him to meet Manikda. The minute he saw me, his face lit up and he lamented aloud, saying I was too old to play Apu of Aparajito. The film went to the 1957 Venice Film Festival and received the Golden Lion award, the Cinema Nuovo Award and the Critics Award. At the Venice press conference, Manikda announced a sequel to Aparajito. Much later, I heard that the idea of a sequel, Apur Sansar, struck him after he saw me. That is how I got my first film with Ray. And, almost overnight, I became a star.

RB: Incredible! What was the immediate impact of Apur Sansar? Did film offers pour in? How old were you at the time?
SC: I was around 21 or 22 years old at the time. Oh yes, many offers poured in. But I did not accept them except one. I went to seek Manikda’s advice when Tapan Sinha approached me to play the romantic lead in his screen adaptation of Kshudito Pashan. I asked Manikda what I should do. He was encouraging and said, “Of course, you must accept the film”. 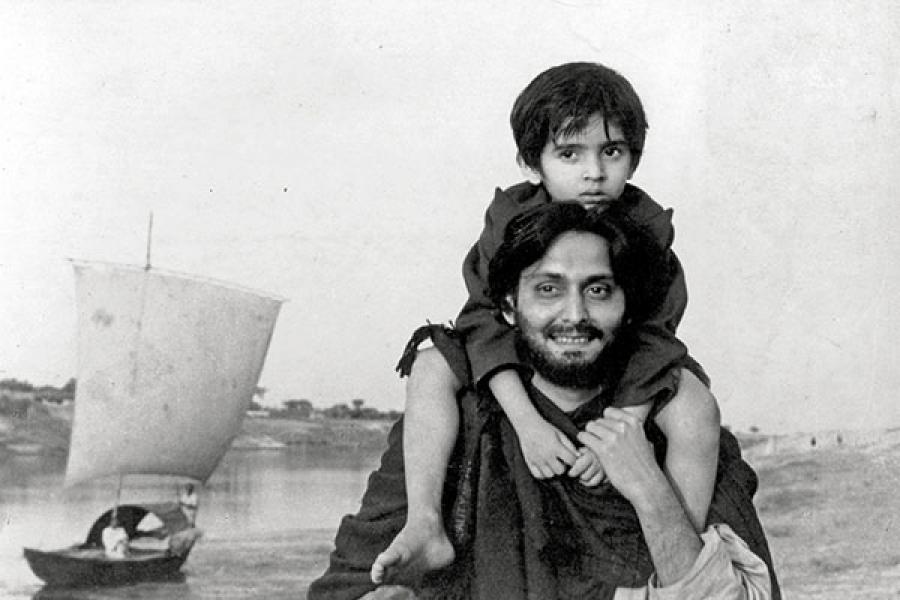 RB: Did Manikda believe in having script readings for his cast before going on the floor to shoot? This is a common convention with stage productions, at least.
SC: No, he did not hold script readings. He did not even give us scripts. With one exception, however: For the first time, I believe, he gave me a personal script of Apur Sansar. This was rare. Occasionally, he read out the script to a select few—mostly to his lead actors. That was quite an experience. Neatly written dialogue sheets of the film under production were sent to us a few days in advance. This was of great help. He would also read out the dialogues to us.

RB: Many great directors—Chaplin, who tops Ray’s list of favourites—act out scenes for his actors. I believe Raj Kapoor did the same. How did Manikda cue his actors to extract extraordinary performances?
SC: Manikda did not follow any method. He was against showing actors how to act. He gave enormous freedom to me. This was his way of handling actors. At the same time, I have seen him treat some actors, literally, like marionettes. He would tell them, ‘Now, look here’ or ‘Move your head a bit’. He had an intuitive understanding of the artiste’s calibre. I have not seen him miscast. Think of it: Rarely did he go wrong in his casting. The title of my keynote address for the Satyajit Ray speech on May 1, 2015, is ‘Satyajit Ray and his actors’. I am speaking about his brilliant casting skill, the way he cast. 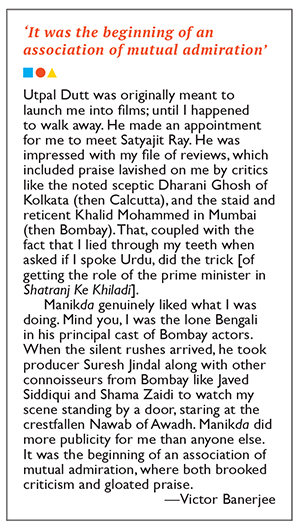 RB: When Tagore’s iconic novel Ghare Baire was announced, there was huge amount of speculation, naturally, about the casting. I remember at home, we went into casting games! The character of Bimala was the most elusive part, of course. Suchitra Sen was approached for it, some believe. Curiously, she refused Ray. Earlier Sumitra Debi was considered… Rumour has it that Manikda was charmed by a certain unnamed Bengali beauty who vanished without trace after marriage! I clearly remember Manikda being impressed with Swatilekha’s talent before he cast her. The two men in Bimala’s life, Nikhilesh and Sandip, were no less formidable to cast. I felt you ought to have played the husband Nikhilesh, and Victor Banerjee was a more convincing Sandip. How did the reverse happen?
SC: Sure there was a lot of discussion. I have to admit, I nearly got to play Nikhilesh. But in this regard, Manikda’s argument was interesting. He asked me why would Bimala be attracted to another man when she had a noble husband like Nikhilesh? He wanted Sandip to be devastating, so charming that she is swept off by his persuasive personality. Sandip’s charm was in the way he spoke. “Which actor in Kolkata spoke Bangla like Soumitra?” Manikda argued. He felt only I possessed this quality to sweep off Bimala.

RB: With the persuasive, alluring, seductive lines Tagore wrote for Sandip and your great gift of the Bengali diction you were finally cast as Sandip. I accept that.
SC: It may sound like I am boasting! But that is what Manikda thought. He would often tell me: ‘Stay youthful… stay young, you have to play Sandip some day’. Ghare Baire got delayed inordinately.

RB: This may sound banal, but which of his films are your own favourites?
SC: I don’t know. I admire his entire repertoire. I admire the man. He was a complete artiste, in every sense. Truly, he stood head and shoulders above anyone. His deep involvement with the arts, his humanity… it is unparalleled. It may not be unfair to say that Ray is a reincarnation of Tagore. A true renaissance figure.

RB: You have been fortunate to play 14 principal Ray characters. Looking back, which Ray characters do you recall fondly? His popular detective creation Feluda, like Byomkesh Bakshi or Sherlock Holmes, is a superhero. You were the original Feluda, in his Sonar Kella and Joy Baba Felunath. Was it fun playing a brainy detective like Feluda?
SC: Of course! I greatly enjoyed playing Feluda 40 years ago. Uttam Kumar had played Byomkesh Bakshi in Ray’s Chiriakhana. As you know, thrillers are rare in Bengali cinema. That was challenging itself. Manikda explored a new cinematic genre. For us, it opened up a new window, especially for his young audience. I loved it. But I have to confess, my first Ray character, Apu, from Apur Sansar remains a life-changing experience for me.

RB: Needless to say, you cherish your extraordinary association with Manikda?
SC: Oh every bit of it… he was cherished. And greatly admired.

Correction: The article has been updated. The last film in which Satyajit Ray worked with Soumitra Chatterjee was Shakha Proshakha (1990) and not Ganashatru as stated earlier.