Future Retail to merge with Bharti 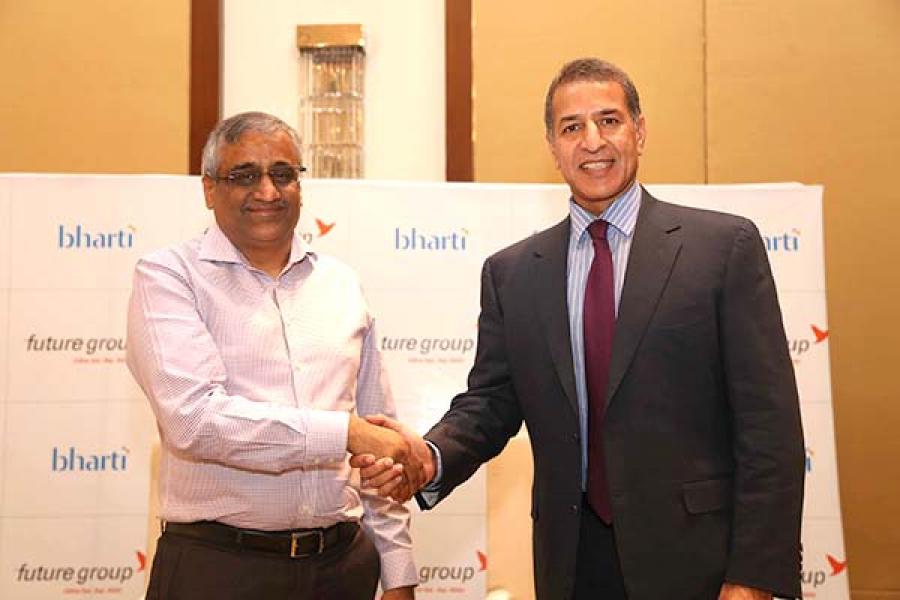 Kishore Biyani-owned Future Retail Ltd, the flagship company of the Future Group, on Monday said it has agreed to merge its company with Bharti Retail Ltd to create one of India's largest retail chains with over 570 retail stores in 243 cities.

The retail business of Future Retail will be de-merged and merged with Bharti Retail. As part of the deal, the retail infrastructure business of Bharti Retail will also be de-merged and merged into Future Retail. When the de-mergers are done, the business will be operated through two companies: Future Retail Ltd, which will own the retail operations of both the companies, and Future Enterprises Ltd, which will host the infrastructure, investments and assets of both the companies. Bharti Enterprises Ltd will own 14 percent stake each in Future Retail and Future Enterprises. “I have known Rajan (Bharti) for a while now,” said Biyani while addressing the media in Gurgaon. “We thought this partnership will make our retail business more and more formidable.”

The de-merger will take 6-8 months. An incubation committee consisting of eight members (four each from Future and Bharti) will run the business in the interim. Kishore Biyani and Manoj Kohli, managing director of Bharti Enterprises, will be a part of this committee.

Rajan Bharti Mittal, vice chairman of Bharti Enterprises, denied rumours of exiting the retail business. “If we were exiting, we would not merge,” he said. “Neither I nor Kishore are looking to exit this business.” Mittal said from Bharti's point of view, this partnership will give them a sharper focus. “We want to grow our retail business.”

The combined entity (Future Retail) will have a turnover of Rs 15,000 crore. Biyani hopes the company will be EBITDA positive from day one. “The intention is to make a pure play retail company which will have a 25 percent return on capital employed and a low debt equity ratio,” said Biyani. He said the intent of the merger was not to attract foreign institutional investment (FII) investment. “The company does not require working capital or debt. If FIIs can come in, the cost of borrowing will come down but that is not the intent of the merger,” said Biyani. Bharti has not transferred any debt to the new entities.

The combined entity will operate 203 Big Bazaar and EasyDay hypermarkets, 197 Food Bazaar and EasyDay supermarkets and 171 other stores comprising Home Town, eZone, FBB and Foodhall. Biyani said they are looking at increasing the footprint of their small stores to 4,000 by 2021. “We have 500-600 small stores now with 100 stores in Delhi alone,” said Biyani.

Tweets by @forbesindia
Parag Parikh: The eternal sunshine's no more
Ray is a reincarnation of Tagore. A true renaissance figure, says Soumitra Chatterjee