The resurgence of indie music

Indie music is seeing a resurgence in India, thanks to a happy confluence of different factors 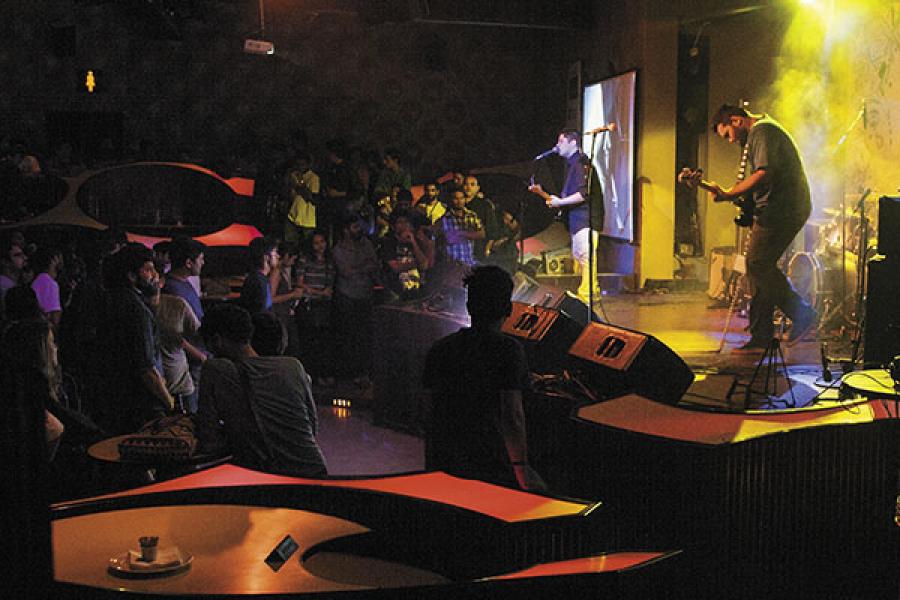 Image: Prasad Gori for Forbes India
A concert at blueFROG in Mumbai’s Lower Parel area. The club was among the forerunners in a group of venues devoted to live music

There are two things we consider mainstream: Bollywood and cricket,” says Arjun Ravi, co-founder of the multi-city music festival NH7 Weekender and director at entertainment company Only Much Louder (OML). It’s true. A 2014 report by Hungama indicates that Bollywood accounts for 81 percent of India’s digital music consumption. But despite film music’s preponderant influence on India’s popular music, in the last decade the country has seen significant growth in independent music of all stripes. Live bands, DJs and producers, and solo artistes are appearing in unprecedented numbers on stages across the country. Their audiences may comprise only a small portion of the overall population, but in absolute terms, they have the ears and attention of many Indians.

Bobin James, former editor-in-chief of Rolling Stone India, emphasises that it hasn’t always been like this. In terms of the growing number of Indian bands, the past three years in particular “have been massive,” he says.

To be sure, this is hardly the first time that the country has had a significant independent music scene. Varieties of non-film popular music—essentially a Western import, distinct from folk, classical, and devotional genres—have had a devoted following in previous eras: Bombay and Calcutta were the twin epicentres of the Indian jazz scene that began in the late 1920s. Later, the ’60s bore witness to the birth of a vibrant Indian rock scene, often called ‘beat music’ by its practitioners.

But there is something undeniably distinct about the country’s current incarnation of indie music. The premium on original songs, instead of covers of Western hits, marks a change. Bands such as Indus Creed (formerly Rock Machine), Pentagram and Indian Ocean were pioneers in this regard, recording and performing their own songs through the late 1980s and ’90s. But acts of this kind had never existed in large enough numbers to truly constitute a scene.

Now they do. Uday Benegal, lead singer of Indus Creed, calls the present a “very fecund period… in terms of the number of bands that are born every day”. In recent years, a diversity of great new acts has emerged: The Raghu Dixit Project, Spud In The Box, The F16’s, The Ganesh Talkies and Papon & The East India Company to name only a few.

The questions arising are: Why is all of this happening now? Why not earlier? What changes have fostered the dizzying growth of this scene?

For one, musicians now have greater access to equipment than ever before. Until the economic liberalisation of the ’90s, foreign-made equipment (both musical instruments and recording equipment) could only find its way into the hands of musicians through tremendous effort. Benegal recalls the lengths to which bandmates would have to go: “If you wanted to buy a good guitar, you couldn’t buy it here. If somebody was visiting or returning from the US or Singapore or Hong Kong, you asked them to buy you a particular guitar. It would cost a lot of money, and the duty was incredibly high. Now you can pretty much just go down the road and buy yourself a reasonably good guitar.” 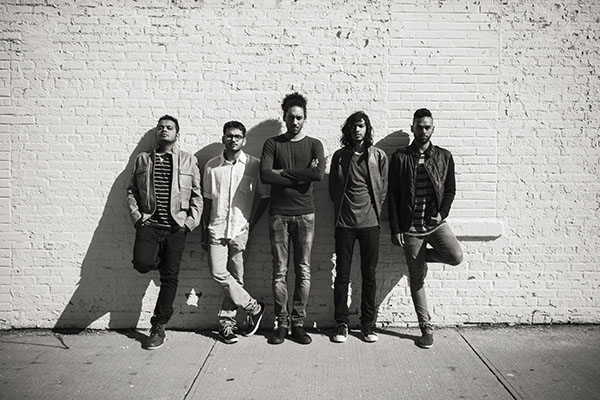 Apart from the increased availability of top-end instruments, in recent years, costs for home recording equipment have plummeted. Now, anyone with a good microphone and a laptop can make a decent home recording. Relatively affordable software such as Logic, Pro Tools, and Ableton Live lessen musicians’ dependence on professional studios, and frees them from the hefty recording fees that accompany them. Cheap, good quality home recording is a phenomenon that has lowered entry barriers for musicians worldwide, and India is no exception.

The Mumbai-based fusion, world music band Maati Baani is a prime example of a band embracing the DIY mentality made possible by these developments. Vocalist Nirali Kartik, whose Hindustani-style vocals anchor the group’s wide-ranging sound, advises up-and-coming musicians to follow her band’s example: “Consider it as a startup”. Kartik formed Maati Baani in 2012 with her husband, guitarist Kartik Shah. The band gained its following through its YouTube videos, which often feature collaborations with musicians from across the world, filmed remotely and produced in India. Initially, the entire audio and video operations fell to Shah. The two believed in the quality of their songwriting, and they wanted to ensure that the quality of their online product was up to par, so they invested seriously in good equipment. Self-engineering and producing was not always easy (Shah said that one of their early videos took nine months to complete), but the results speak for themselves: Today the band boasts a devoted fan base (including over 26,000 followers on both YouTube and Facebook) and a busy touring schedule.

The tools that facilitate Maati Baani’s success may also have something to do with why India’s indie music scene has moved away from covers to originals. YouTube, Bandcamp, iTunes—the same online platforms that allow Maati Baani and other artistes to distribute their music at almost no cost—also enabled the widespread distribution of the very songs Indian musicians had been covering. If recordings had been hard to come by before, their new pervasiveness meant that audiences no longer had to rely on a live band to recreate the songs they wanted to hear. With a few clicks, they could simply get the real thing. 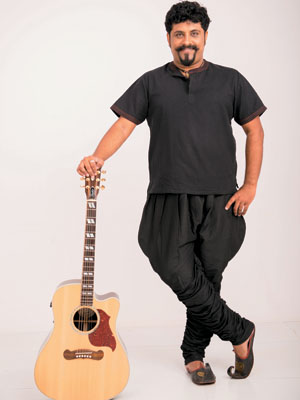 So now, Indian musicians have been somewhat freed up to play their own music. But their album sales fall well short of generating significant income. Dhruv Visvanath, a guitarist from Delhi, typifies the way many musicians cobble together a life in the arts: Apart from taking on gigs, Visvanath writes music for advertisements and has tried his hand at some minor film scoring, including for a short entitled QX2026, which premiered at the 2015 Cannes Film Festival.

Sitting in on studio sessions also presents a way for indie musicians to support themselves, as does touring with playback singers who want the benefit of a live band for their shows.

Shazneen Acharia—who works with Oranjuice Entertainment and manages Mumbai-based alt-rock, punk outfit The Lightyears Explode—pegs the year 2007 as the time when the country’s indie music scene really came into its present form. Facebook had just begun to catch on around this period, and it would prove important to the cohesion of a scene that existed mainly in the geographically disparate corners of the country’s major cities.

This was also the beginning of a period that saw the opening of live-act venues that would go a long way in providing a physical platform for performances. In December 2007, blueFROG opened in Mumbai’s Lower Parel area. The club opened just over a year after Hard Rock Cafe launched its first India location (also in Mumbai), and it was one of the forerunners in a group of venues devoted to live music. Later, there were venues such as Bonobo in Mumbai, The Humming Tree in Bangalore and TLR Cafe in Delhi’s Hauz Khas Village. December 2007 was also the inaugural Sunburn Festival in Goa, which has now become an internationally-acclaimed Electronic Dance Music (EDM) festival.

Rolling Stone India launched in early 2008, signalling optimism about the sustainability of the scene that would constitute the lifeblood of its written content. And in late 2008 there was Soundpad, an initiative organised by the British Council that brought legendary UK-based producer John Leckie to work with Indian bands. After an audition process, Leckie selected Medusa (now Sky Rabbit), Indigo Children, Advaita, and Swarathma to record an album with him, which was followed by a brief UK tour. Acharia says that Leckie’s work with Indian bands did something to legitimise the broader indie music scene—it was a gesture of assurance that music made in the subcontinent could measure up with the best anywhere.

While 2008 constituted something of a ‘Great Convergence’ for India’s indie scene, probably the single most important factor was the growth in the number of music festivals, heralded by Sunburn. Festivals are important for the entire indie music scene—fans, musicians, and promoters alike. And the rate of growth is astounding. Naveen Deshpande, founder of Mixtape (a Mumbai-based, artist- and event-management company) estimates that there were about 34 festivals in the past festival season of September 2014-March 2015; it’s a sharp increase from the four to 10 that took place in 2010. VFest, India Bike Week and Enchanted Valley Carnival are among them. 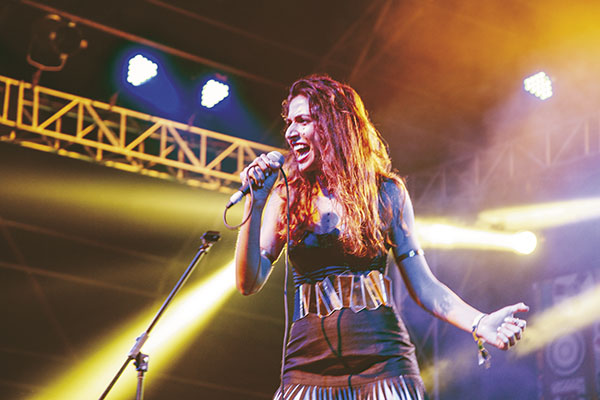 Festivals are also where the money is. For the musicians, touring the festival circuit is much of what makes playing music financially viable. For the event organisers, festivals are big business, although revenue from ticket sales is simply not enough to fund these massive events. “Any sort of work in the arts does not happen without patronage or sponsorship,” says Acharia. While in some instances, councils and government patronage help fill the revenue gap, corporate sponsorship remains extremely important. Liquor brands—which by law cannot engage in any advertising—understand best the huge marketing opportunities these festivals present. And they’ve signed on wholesale.

Every stage at NH7 Weekender has corporate sponsorship—notably from Bacardi and Dewar’s—though non-liquor brands also play a large role, as elsewhere. Deshpande says that brands are planning shows with festivals for the long haul, for the next five to 10 years. Though some fans would criticise these brand associations as a sign of festivals ‘selling out’, corporate partnership does and will continue to play a crucial role in the patronage of the nation’s indie music scene.

But despite the spread of indie music in recent years, there is much that needs to be seen. Bobin James says that although India is making world-class music, he still observes a certain asymmetry in the dynamics of the country’s indie scene. Artistes from abroad come to headline the big Indian festivals, but India’s own musical talent rarely ventures beyond the country’s borders. Indian music, beyond Bollywood, needs to go international, he says. Some cultural shift needs to take place.

Given the speed with which the world of Indian indie music is changing and growing, this may well be only a matter of time.