Numbers can differ from one study to the next, but there is unequivocal evidence that most things we use today, as our economy expands, come with a human and environmental cost that can no longer be ignored. Which is why advanced technologies in many areas can make it easier to switch to greener alternatives. Tessol in Mumbai, ProKlean in Chennai and Bengaluru’s Altigreen are demonstrating such possibilities every day.

Tessol’s quick-charge and heat-exchange solution decouples a reefer truck’s refrigeration from its engine, cutting diesel consumption, whereas Altigreen has a compact fit-and-forget designed-and-made-in-India hybrid electric kit for any car on Indian roads today. ProKlean’s probiotics formulations cut pollution in leather, textile, hospitality and paper and pulp sectors. Besides, these three companies also demonstrate that, far from the glitz of ecommerce, India is seeing a quiet revolution in hardcore engineering-driven ventures that could do with generous funding. What needs to change is the same old thing—our resistance to change. 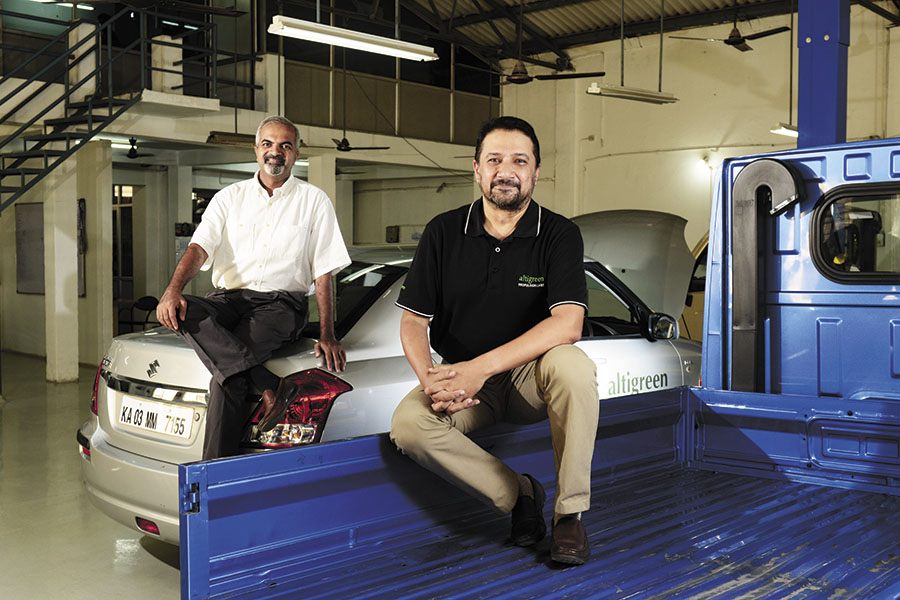 How green was my ride

Look at the World Health Organization’s list of top 20 most polluted cities and India has 10 of those, points out Amitabh Saran (49), CEO of Altigreen Propulsion Labs in Bengaluru. In 2013, Saran started the venture, which makes an after-market “fit-and-forget” kit that will turn your car into an instant hybrid, making it more earth friendly, and saving you money on fuel.

Although Delhi-NCR, for instance, introduced CNG vehicles 20 years ago, overall, “things have only deteriorated and the gravity of the situation is visible now”, says Saran, who was an engineer with Nasa, and has a 26-year career that includes stints at HP, TCS and Philips.

Collectively, they’ve worked in the world’s biggest names in automotive and aerospace engineering, as well as finance.

Their kit comprises a motor-generator that is compact enough to sit snugly alongside a car’s engine beneath the hood, and a standard lead-acid battery pack, which will take up as little as 15 percent of the car’s boot space, sitting behind the rear passenger seat. The kit can work with small commercial vehicles as well.

The battery gets charged a bit
every time the brake is applied, and also from the vehicle’s waste energy. When the vehicle is running, the motor lends its shoulder—driven by the battery pack—reducing fossil fuel consumption.

Depending on the vehicle, the retrofit system, branded HyPixi, will cost between `60,000 and `90,000. For the owner of a taxi fleet, for instance, the kit will pay for itself with the 25 percent increase in mileage and 20 percent reduction in emissions.

With their electronics and software savvy, the entrepreneurs at Altigreen have built HyPixi to be highly instrumented from the get go.

There is a set of sensors that will send data on a host of parameters to a cloud, and drivers can use a smartphone app to get useful feedback to improve the way they drive as well as take proactive maintenance measures.

The first commercial kit was fitted on a Toyota Etios sedan in 2013. Today, customers including Carzonrent, Coca Cola, BigBasket and iD Fresh are piloting about 20 kits on their cars and delivery trucks. Altigreen has raised about `20 crore from investors including Chetan Maini, founder of the Reva Electric Car Company, and Jupiter Capital, and works out of a frugal, everyone-on-the-shopfloor non-AC setup in one of Bengaluru’s industrial areas.

The time from 2012, when they established a proof-of-concept, to now has been spent building their ecosystem of component suppliers and manufacturing partners—the kit is manufactured in India—after-sales support network, finance for buyers and getting regulatory approvals to test and sell the kit.

Talks are on with multiple potential partners, from large carmakers and their dealers, to one of India’s biggest lenders; 2017 could see Altigreen’s plans take off. And the market is ready, with 40 million to 50 million fossil fuel burning vehicles projected to enter the market over the next 10 years.

“Our vision is carbon-free transportation,” Saran says. That means electric vehicles, but that future is still some distance away.

India does have a stated aim of going all-electric for most transport by 2030. Building hybrids that most car owners and commercial fleet owners can afford is an excellent first step right now. 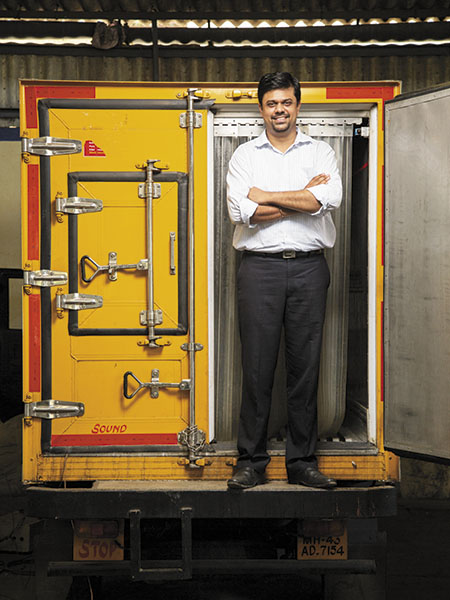 It’s the coolest one: Rajat Gupta of Tessol
Image: Joshua Navalkar
Keep Cool and Carry on

Gaps in India’s cold-storage infrastructure are seen as a big contributor to the massive wastage that India sees in its perishables every year. To combat that, the country has seen a rising number of reefer trucks that help store or transport products in an enclosed temperature-controlled space. These lead to an enormous carbon footprint as the truck engines continue to burn diesel to keep the refrigeration going.

The cold-storage warehouses, too, contribute to this as they depend on grid electricity, which is largely from coal-burning utilities, or on captive power generators, which again burn diesel.

Thermal Energy Service Solutions (Tessol) in Mumbai is tapping these challenges as a market opportunity by developing technologies that not only help cut down greenhouse gas emissions of reefer trucks, but also improve storage reliability and reduce overall costs of operations.

“There was a lot of focus on energy generation, with solar and wind, but nothing was being done on the energy storage side,” says Rajat Gupta (35), founder and CEO of Tessol. He decided to dig deeper and realised that while the technology exists for thermal energy storage, it hadn’t really caught on.

Tessol’s breakthrough, according to Gupta, is the design of a heat exchange unit that can be charged at any power outlet in about six hours. Once charged, the unit will keep the refrigerator on the reefer truck within the optimal temperature for a full-day’s operation.

The cooling is achieved using, what are called, ‘phase change materials’ that are sealed inside the cold plates of the refrigerator container. In very simple terms, this works like ice forming and melting, Gupta says. The simplest form of this technology would be a gel pack: It has a liquid that freezes and melts, keeping things around it cool.

The overall cost of using Tessol’s solutions could be as much as 60 percent less than using a conventional transport refrigerator that depends on power from the truck’s diesel engine, he says. This has also been validated by customers such as Monginis, a well-known name in fresh bakery products, which has adopted Tessol’s solutions on some of its trucks.

This uncoupling from the diesel engine will save an operator about 1,000 litres of diesel a year, Tessol estimates. Gupta, a Harvard University MBA, started Tessol in June 2014, and in the recently-concluded fiscal, has shipped some 125 units. He expects to break even if Tessol can sell between 300 and 400 units a year. 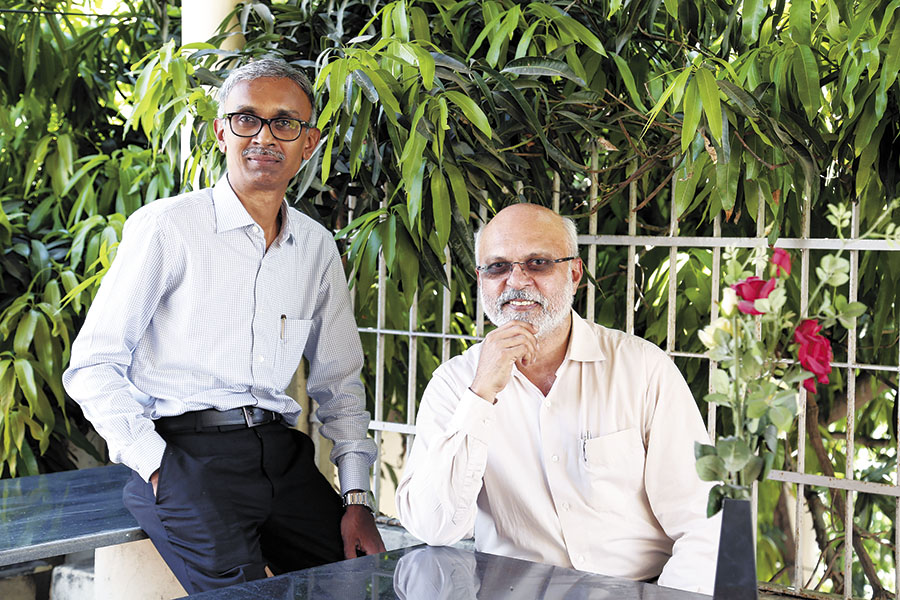 Good bugs can make a big difference. S Sivaram Pillai (64) knew this all his adult life, with his experience as a biochemist, and as a top corporate executive for 15 years running large projects for the Murugappa Group. Hence, the business potential of probiotics, an interest he had picked up over a decade ago, was a no-brainer to him and he latched on to the opportunity when it arrived.

It started in 2009 with ProKlean Technologies, a venture that was triggered off by Pillai’s chance meeting, on a Yahoo group, with B Chandrashekar, an entrepreneur who owned a leather processing unit and was interested in the potential of probiotics for industrial applications.

It helped that, a few years earlier, Pillai had met a like-minded American entrepreneur whose company SCD Probiotics was working in the same area (at Murugappa, Pillai was a customer of SCD); he spent two years working as the CEO of the US firm.

When Pillai returned to India, a combination of experimentation and serendipity helped him and Chandrashekar figure out the processes of making probiotics-based alternatives to chemical surfactants; a typical example is the chemical used to scrub grease from stoves, drainpipes and chimneys in restaurants.

What they also succeeded at was to come up with manufacturing processes that would keep costs at a level that was competitive with chemicals.

And finally, which is where customers have found it easy to switch, ProKlean’s formulations don’t need any changes to existing operations at the customer’s end.

“All they have to do is to replace the chemicals with our formulations,” he says. This way, the venture did away with one big challenge towards gaining market penetration.

It took two years of hard work to come up with the first formulations that were really effective—it finally happened in 2011.

In 2012, ProKlean raised `2.5 crore in angel funding from Chennai Angels as a seed round and started developing as a business. That year, Vishwadeep Kuila, a marketing expert, came on board as the third co-founder.

By 2013, the company was acquiring serious customers. And in another two years, money was beginning to come in: It included a reverse licensing agreement with SCD that allowed the American partner to focus on the leather industry, while ProKlean expanded into formulations for the textile sector in India.

That year, the startup also raised its series A funding of `3.5 crore, led by Infuse Ventures.

Revenues rose to about $2 million for the year that just ended, March 31, 2017, split evenly between ProKlean and SCD.

This year, ProKlean expects to double its revenue and the goal is to hit $5 million by 2019.

Pillai says: “We didn’t have a grand vision or anything to start out, but we just wanted to reduce the pollution around us.”

Tweets by @forbesindia
Keep your customers happy but disorganized to prevent buyer power
GST countdown: A brief manual to determine 'place of supply'