The Road Ahead for Virendra Mhaiskar and IRB India

Virendra Mhaiskar has made IRB India’s largest and most profitable toll-road operator. In a sector that has most companies reeling under debt, he seems to be the rare animal with enough cash on hand 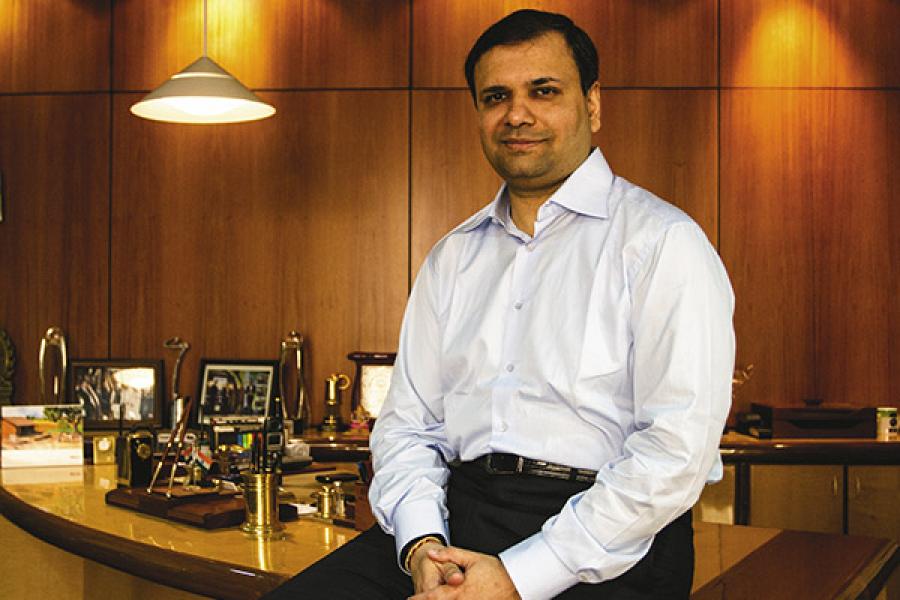 Virendra Mhaiskar must be incredibly crazy. There is nothing else that explains the kind of risks the 41-year-old chairman and managing director of IRB Infrastructure takes, and his rise as India’s largest and most profitable toll-road operator. He deals with problems of the kind that could drive most people around the bend.

Consider, for instance, the episode this July when the Maharashtra Navnirman Sena (MNS), one of Maharashtra’s most raucous political parties, thought up an idea: Galvanise supporters to go past toll booths across the state without paying to use the roads. Egged on by exhortations made by their leader Raj Thackeray, they complied, and men tolling the booths could do nothing. Thackeray claimed it was to protest against the obscene profits the “toll mafia” was raking in from the dense traffic that used these roads.

Toll booth staff manning the Mumbai-Pune Expressway, the crown jewel in IRB Infrastructure’s portfolio, came in for special treatment. (The company is responsible for its upkeep until 2019.) Ironically, Mhaiskar says, “Raj is a friend at a personal level.” But that said, he argues, “To those who say traffic has grown more than projected, I ask, what if it had been otherwise? Would we get our money back?”

I ask if he has tried explaining this to Mr Thackeray and how they continue to be friends. “Enforcing agreements signed with developers, and explaining the rationale to stakeholders is the government’s job,’’ he says, as a matter of fact. I can’t help but think it ironical. But I guess there is a method to the irony. How else could he have grown the company into India’s largest in the sector, and manage 12 roads across west and south India? So, I probe him a bit deeper. “The government’s policy on road construction and toll through the build-operate-transfer (BOT) model has been the most successful and transparent of all public-private partnerships in the country. But it is also the most poorly understood,” he says.

The problem, Mhaiskar says, is no politician or bureaucrat has bothered to explain to the public how it works. By way of explanation, he offers an analogy. “If you borrow Rs 70 lakh to buy a home, and agree to repay it over 15 years, you return several times the amount to the bank by the end of the tenure, and nobody complains. Going by that same logic, how can you argue if a road developer has invested Rs 1,500 crore [over 20 years], returns ought to be limited to the original investment? What about our borrowing cost, maintenance costs and our returns?”

That is why, he says, public anger manufactured against toll-road operators by politicians have badly impacted investors in the business. Caught between policy changes and the unwillingness (or inability) of users to pay, they are stuck with millions of dollars in debt.

For instance, he’s still trying to extricate himself from a situation in Kolhapur, where IRB won a 30-year contract in 2008 to maintain all of the city’s inner roads. Back then, it was hailed as a pilot project that would lead the way for municipalities across the country to liberate themselves from the responsibility of maintaining roads. People in the city, though, simply refused to pay, and earlier, in January, they organised rallies to protest against the tolls. Collections had to be stopped after the state government thought the protests impossible to ignore. All attempts to find a solution continue to hang in abeyance.

Problems like these find participants in the Indian infrastructure business under huge amounts of debt, and are compelling many to get out of the projects they had bid for. Mhaiskar, though, seems the rare animal with enough cash on  hand. His revenues almost doubled from Rs 1,753 crore in 2009-10 to Rs 3,255 crore in 2011-12. His profit margins are a little over 15 percent. And, early in October, he signed on to buy out MVR Infra’s road project in Andhra Pradesh for an undisclosed amount. “A lot of such projects are now on sale, mostly by promoters under stress. We are looking at those that can give us an internal rate of return [IRR] of at least 20 percent,” Mhaiskar says.

You must be wondering if Mhaiskar is counting his chickens before they hatch, but Parikshit Kandpal, a senior analyst at Karvy Insitutional Equities, shares his optimism and is putting a ‘buy’ rating on the stock.

Most of the projects IRB is involved with are either in the west or south of India, he says. These are parts of the country that have demonstrated most growth. Of these, projects in Maharashtra and Gujarat account for 74 percent of IRB’s portfolio. “Understanding risks in traffic growth is a big part of our project evaluation,” says Mhaiskar.

When the government opened up projects for private participation in the late 1990s, many businessmen bid aggressively. They followed up later by raising equity from the public at super-normal valuations. Mhaiskar, too, capitalised on the market’s appetite for infrastructure companies. He raised Rs 944 crore through an initial public offering (IPO) in 2008.

For many, fat order books were a measure of success, irrespective of the cost at which they were acquired.  But soon the regulatory environment changed, and returns from ventures dropped below expectations. As banks cut down on lending, larger companies like GMR declared they were taking ‘investment holidays’.

The difference between Mhaiskar and his rivals, investors point out, is the former’s integrated approach. He can construct, operate, and maintain roads with in-house talent. As against this, his larger rivals get work done by awarding contracts to third parties. The problem with this approach is that cost and time overruns can make or break a project. These risks are significantly reduced if all of the variables are in control. Mhaiskar had these figured out.

Rivals say Mhaiskar is just about beginning to make his transition to the big league. The acid test will be the Rs 4,880-crore, Ahmedabad-Vadodara road project—his biggest yet. It is right now almost half his order book.

He won the project after an aggressive bid that promised to pay the government a premium of Rs 309 crore from the first year of operations, with the amount going up by five percent each year for the next 25 years. His closest rival, Madhucon builders, had quoted Rs 190 crore. A slowdown in the economy has been a huge challenge. But Mhaiskar remains unfazed.

His confidence perhaps stems from his experience with the Mumbai-Pune Expressway. When opened to the public in 2000, it was expected to be a runaway hit. Nothing of that kind happened. Motorists continued to favour the older, poorly-maintained highway they could use without paying. The state government soon realised that they would never see any return on this project unless things changed.

So they offered both roads together as a package and invited bids from companies to operate, maintain, and collect toll for them for the next 15 years. IRB won the bid and, in 2006, the government mandated that a car using the road pay Rs 100. They could travel on the older road for Rs 60.

“A lot of traffic slowly shifted to the Expressway,’’ says Mhaiskar. He concluded that if there are two toll roads, motorists don’t mind paying a premium for a better experience. “We think the picture will be similar for the Ahmedabad-Vadodara highway.” This, too, is a dual corridor, with an existing four-lane highway that IRB has to upgrade to six lanes, and an older two-lane road. “Our bid was bullish, because we built in this traffic-shift into our calculations. Our competitors obviously did not,’’ he says. He estimates the road will get him an IRR of 17 percent.

But that’s the bullish part. He has had his fair share of setbacks as well. His big plan to move into real estate after acquiring 1,200 acres near Pune to build a township came under a shadow after a Right to Information (RTI) activist, Satish Shetty, was brutally murdered by unknown attackers near Pune in 2010. Shetty was investigating allegations of land-grabbing from farmers along the Mumbai-Pune Expressway and had filed a complaint with the Inspector General of Registrars (IGR).

Sandeep Shetty, the brother of the deceased, named Mhaiskar as one of the suspects. In April this year, the CBI put him and 11 others through a polygraph test. The IRB stock tanked 11 percent that day. Since then, the stock has recovered and Mhaiskar claims his realty plans are in limbo because of the economic slump. But the last word on the issue remains to be said.

More recently, he was served a tax notice on all his toll receivables. If enforced, it could wipe out all his profits. Each of these episodes has dented the stock price, and IRB has lost half its value on the benchmark Sensex over the last two years. But Mhaiskar is gung-ho and says, “Each of these issues is peripheral and has nothing to do with our business. We have never conducted business badly.”

The company has paid out dividends in excess of 10 percent during the last three years. A conservative ratio of projects under construction to those already operational helps keep the cash coming in. Of the 18 toll projects, 12 are generating revenues, and three will start contributing by the end of this financial year.

In his line of sight now is an airport. The plan is to build a small one at Sindhudurg on the Konkan coast, north of Goa.

The company has a 95-year concession from the Maharashtra government to build and operate the airport as well as a 670 acre parcel of land alongside. The Rs 175-crore project is expected to be completed in two years. The airport will cater to tourist traffic to the region, which is currently constrained by lack of access.

Last year, he created a stir when news trickled in that he had purchased a Hawker Beechcraft business jet for Rs 100 crore. A Goldman Sachs report said IRB had masked the purchase. On his part, Mhaiskar says it was bought after paying all duties, and shown in the balancesheet of IRB’s EPC arm. He wants the machine to be the first to land on the airport when it is finally built, and is hoping all the ghosts of the recent past will be behind him by then.