Exploring the Relationship Between Steely Muscles and Steely Resolve

Self-control of one form or another is a challenge for most people.  Describe the basics of this age-old conflict.
Self-control dilemmas typically involve trying to resist something that is immediately tempting, but that we know is not good for us in the long-term.  For example, say you need to lose some weight, but you really feel like eating that piece of chocolate cake on the buffet: you are fully aware that doing so conflicts with your long-term goal and that you should restrain yourself; but will you?

Self-control dilemmas also arise in situations where we have to undergo immediate pain or discomfort to achieve a long-term benefit.  For instance, everyone knows they should be saving our money for the future, yet we still go shopping, and despite our best intentions we often splurge on minor indulgences.  Exercise is another example;  we often have to force ourselves to get off the couch and get to the gym, but we know full well that if we do, there will be significant long-term gains. 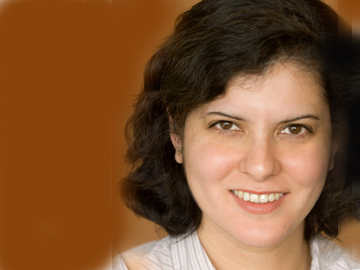 Aparna Labroo is the Patricia C. Ellison Professor of Marketing at the Rotman School of Management
One tool we use to enforce self-control is willpower. What are some of the key things we know about it?
Willpower is what enables us to say, ‘I am not going to give in: I am going to do what is best for me in the long-term.’  People try to summon willpower in a variety of ways; they may conger up thoughts that bolster the value of long-term actions or suppress thoughts of temptation. The problem is, willpower is a limited resource, and employing it is difficult. As a consequence, as people try to ‘firm up’ their resolve, they may clench their fists, grit their teeth, or scrunch their muscles, reflecting the mental turmoil that comes from combating a self-control dilemma. Some of my colleagues have actually compared willpower to a ‘muscle’ -- something that you can work to strengthen but that can also quickly get depleted.

What is ‘embodied cognition’?
The traditional view amongst philosophers, psychologists and consumer researchers was that the mind is an engine that powers the body and enables us to act, steering us to accomplish whatever we perceive to be in our best interest. But recent evidence on ‘embodied cognition’ is establishing that the body actually influences the mind to a greater degree than has previously been recognized.

The basic idea of embodied cognition is that memories are composed of experiences that are ‘multi-modal’ and spread throughout the body – they are not stored purely in the mind. Cognitions that reside in the mind are just one component of an experience that additionally includes an entire constellation of perceptions, movements and sensations that make up the experience. When people retrieve experiences from their memories, these multi-modal representations ensure that accompanying bodily states are activated along with the associated cognitions.

One important consequence of memories being multi-modal is that, not only do cognitions generate accompanying bodily responses, but those bodily responses can also independently generate the associated cognitions and influence judgment. For instance, while research shows that the solution of brainteasers involving spatial relations is accompanied by eye movements, it also shows that eye movements can significantly improve the rate at which one can solve such brainteasers. Studies also show that standing upright (vs. slumping over), which often occurs when one feels powerful, can also evoke sensations of power; nodding (vs. shaking) one's head can increase how much one agrees with a persuasive message; merely simulating a smile (vs. a frown) can elicit positive emotion; and mere exposure to sunlight can induce positive feelings, when then influence our actions.

Describe how your research integrated the findings on self-regulation and embodied cognition.
Given the findings that cognition is embodied to a certain extent, my colleague Iris Hung and I felt that the body might also be instrumental in self-regulation. That is, if self-control is a battle that involves strengthening willpower to withstand immediate discomfort or resist immediate pleasure to attain long-term benefits, might firming one's muscles also help to firm willpower?  We felt it was entirely possible that in our minds, we associate ‘firming up’ with willpower – that it is an automatic reaction to a self-control dilemma. The question we had was, could firming up also help us recruit willpower and self-control?

You and Prof. Hung conducted five experiments to test your hypotheses.  Describe the highlights of your research.
In one study, we found that when people clenched their fist, they were more likely to make a donation to Haitian Earthquake Relief. That was very interesting to us, because you might assume that clenching one’s fist would be associated with less donations; but here, people who firmed their muscles while viewing very unpleasant images of poor, devastated children opened their hearts and gave significantly more money than those whose fists were not clenched.  A gut negative reaction and feeling of discomfort was overcome, and they did something good. Basically, their willpower was summoned to say, ‘I have to deal with this. It’s good for me to deal with it.’

In another study, we told people that the ability to withstand icy water indicates how good your blood circulation is. We got a bucket of ice, and Iris and I learned that it is actually very painful to submerge your hand in it -- even for a few seconds.  Nevertheless, we asked people to put their dominant hand in the bucket. For some, we asked that they clench their other hand at the same time.  What we found is that, because people believed that submerging their hand for a longer period indicated strong blood circulation, i.e., it was an indicator of their long-term health, those who clenched their other fist were able to submerge their hand for a significantly longer period.

In a third study, we gave our subjects a nasty concoction to drink:  one part vinegar and ten parts water.  This is actually very good for you – it helps with everything from hair and skin condition to digestion.  We asked some of the group to drink it, and others to drink it while clenching their fist. We also used a classic technique in Psychology by reminding all of the subjects of their long-term health goals. What we found is that those who firmed their muscles were able to overcome their initial resistance and drink much more of it.

The flip side was, could this technique also help people resist something tempting and do what is best for them in the long-term? In a fourth study, we caught people before they went into a snack bar and told them we were running a study. Some were told to proceed inside and make their purchase, while others were asked to hold a pen between their four fingers of one hand, which unbeknownst to them, had the effect of firming their muscles.  All we said was, ‘Hold this pen in your non-dominant hand’. We indicated that we were testing multi-tasking.  We also asked all of them whether they had a health goal or not; the idea was, were they going to face a dilemma when they saw yummy things in front of them?

When the students returned to our stall outside the cafeteria, we surprised them by asking for their receipt, and we looked at what they had bought.  What we found is that people who had a clear long-term health goal tended to buy much healthier items compared to those who didn’t have a clear health goal; and that those who had a health goal and were firming their muscles, on average, bought the healthiest things.  Of course, even a little bit of substitution of healthy items is great, because saving a few calories a day can make a big difference in the long run.

From a public policy and consumer well-being perspective, your research has important implications.
It does. I think it’s important to let people know that this works, and that it works best alongside a conscious focus on one’s long-term goals. Of course, people shouldn’t dwell on their long-term goals all of the time; if they did, they would probably end up having lots of regrets later in life. But when we are facing a dilemma we can firm our muscles and it will help to strengthen our resolve.

This not a magic pill, of course; it won’t ensure 100 per cent success in achieving your long-term goals; but we definitely found that it creates a small increase in self-control and will power. We tested our hypothesis mostly in regards to doing social good, helping others and doing personal good, but we believe these findings can be generalized to all kinds of other dilemmas, such as making financially-prudent decisions, saving and conservation behaviours – anything where the gut reaction is, ‘Nah, I don’t feel like doing this, even though I really should’.

Could your findings also help business leaders exert self-control when necessary?
I certainly hope so. I think one area where it could help is with social interactions.  In our increasingly complex environment, it is more and more important to force ourselves to listen to conflicting points of view, and this can be seen as a self-control dilemma, too. It’s easy to just switch off and not listen to what others have to say and stick with your own view. From our findings, if you remind someone that the goal is to reach a truly optimal decision for everyone, and ask them to firm their muscles, it should actually make him or her more responsive to the parties they’re negotiating with.

Aparna Labroo is the Patricia C. Ellison Professor of Marketing at the Rotman School of Management.  She is the co-author, with Iris W. Hung, of “From Firm Muscles to Firm Willpower: Understanding the Role of Embodied Cognition in Self-Regulation, which was published in the Journal of Consumer Research (Vol.37). Rotman faculty research is ranked in the top ten worldwide by the Financial Times.