A tragedy in the family made Manjunath, a computer engineer, turn her focus to breast cancer research 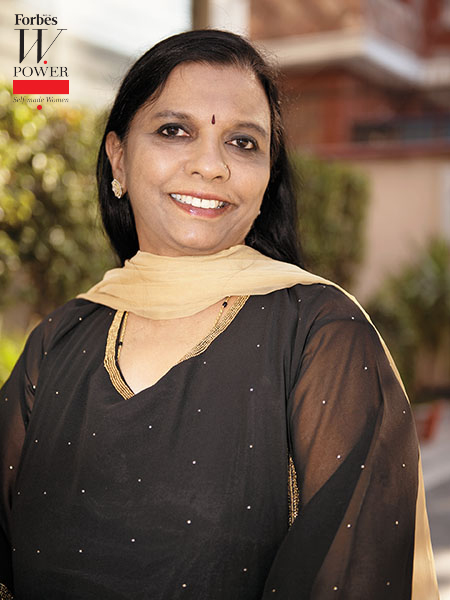 The first urban breast cancer screening camp by artificial intelligence (AI)-based health tech startup Niramai was held at founder Geetha Manjunath’s first workplace, the Centre for Development of Advanced Computing. “It was my way of giving back,” says Manjunath, who was part of the team there that developed the first supercomputer from India in the 1990s.

They had announced the camp but there were, disappointingly, only four registrations. The team decided to go ahead anyway, and set things up in a conference room, ready to start at noon for the 15-minute per person procedure. By the time they had screened two people, registrations started pouring in and the camp went on till 7.30 pm.

Niramai’s non-invasive “no-see, no-touch” solution Thermalytix, a computer-aided diagnostic engine that combines thermal imaging with AI to detect early-stage breast cancer, had quickly found takers. “When I came down to leave at 8, the general manager was waiting at the reception. He said, ‘I know this is a free camp but we want to pay you a nominal amount, you are doing a great service’,” she says, recalling that he handed her a cheque for ₹5,000.

Though they didn’t set out to be “privacy aware”, the team realised it was more comfortable for people. The test involves sitting in a booth for 10 minutes. “Nobody sees you or touches you; not even the technician is inside the booth. You come out and the report is ready,” says Manjunath. “Since the device was remotely controlled, we started putting a curtain between the technician and the woman being screened, and saw how huge a difference privacy awareness makes to the adoption.”

Learning something new and trying to solve problems have been motifs in Manjunath’s journey. She attributes her engineering bent of mind to her father who was always repairing and fixing things himself, and the reason she picked studying engineering over medicine when she cleared her Class 12 in 1984 with flying colours. Manjunath studied computer science and went on to get a master’s degree from the Indian Institute of Science, Bengaluru, topping in both. After working in the field for 17 years, she decided to do a PhD, choosing a completely new subject rather than what she already knew. “I am like that. I went back and picked up a completely new topic, which is AI and data mining. I never knew it would be such a big thing now.”

It meant going back to maths and other classes, sitting with younger students, and getting a C grade in her first test. “I am not used to getting C grades at all, I have always topped grades, but it was because I was writing a test after 17 years,” she laughs, adding that she soon got her “rigour” back. She then joined an MNC as a senior manager where the team worked on emerging markets solutions, transportation and traffic management systems as well as with hospitals and health care, trying to do “meaningful innovation with business and social impact”.

A tragedy in the family made her turn her focus to breast cancer screening and to entrepreneurship in the form of setting up Niramai in 2017. “The last three years have been amazing for me, interacting with hospitals and doctors, with investors, raising funds. It’s been a learning experience,” she says.

“ The last three years have been amazing, interacting with hospitals, raising funds. It’s been a learning experience.”

Niramai has raised $7 million so far—seed funding of $1 million in April 2017 and Series A funding of $6 million in February 2019. Its products, which do not involve the use of radiation, are being used at 50 locations in 13 cities with the basic test costing around ₹200 (used in rural camps, it does not generate a full report) and ₹1,500 in hospitals as against ₹3,500-4000 for a mammogram. Niramai is looking at international regulatory approvals and recently also won a Bill & Melinda Gates Foundation grant to develop a solution to control river blindness. “It shows the technology we have developed can be used beyond breast cancer screening,” says Manjunath.

There are two pieces to Manjunath being an entrepreneur, says Ritu Verma, co-founder and managing partner, Ankur Capital Fund, which has invested in Niramai. “One is that she comes with a super deep domain experience. Having spent her life in R&Ds of large MNCs, she’s been exposed to the domain experience globally and brings that to building the technology,” says Verma. The second part is her passion and enthusiasm for building this and bringing it to the market. “She brings the same amount of passion if we are sitting in a public hospital versus going to a Stanford or a Harvard and talking to researchers there.”

The road ahead, says Manjunath, is to make a real impact in reducing deaths due to breast cancer. “And putting India and health care innovation on the world map.”

Tweets by @forbesindia
Meet Manasi Joshi, who lost a leg but became a badminton gold medallist
Supreme Court's cryptocurrency ruling could rekindle startups in the area