Since January, airlines have reduced or canceled service to Hong Kong, South Korea, Japan, Italy and other destinations, as demand for travel abroad slid, leading to growing concern for the sector 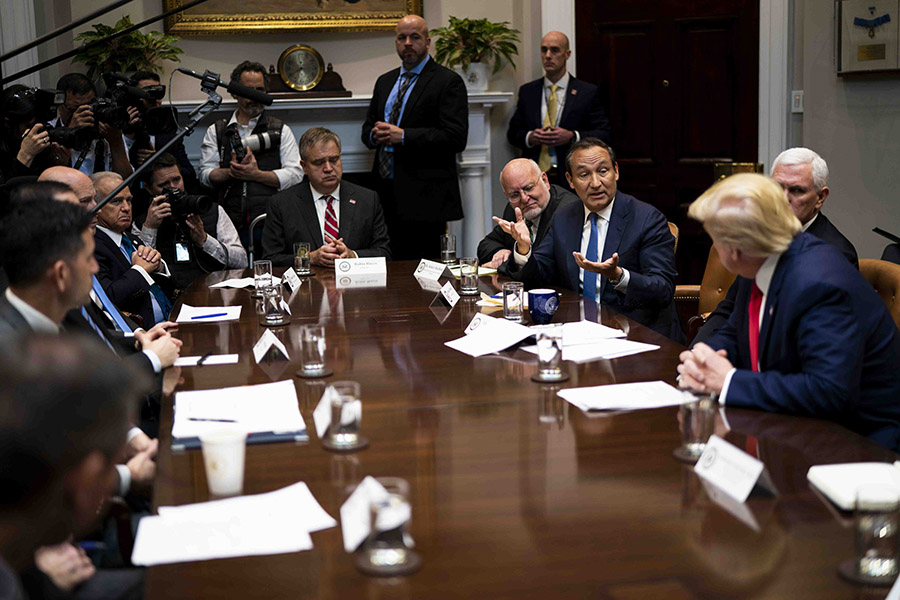 Since the financial crisis a decade ago, airlines in the United States have consolidated and tightened operations, taken advantage of changing travel habits, and created new offerings for passengers, engineering an extended stretch of profitability. Now, the coronavirus threatens to put all of that to the test. The latest example of the outbreak’s toll on the industry came Wednesday, when United Airlines became the first U.S. carrier to announce a widespread cut to domestic service, signaling that fear over the virus was starting to erode ticket sales far from the hot spots of the epidemic. In a letter to employees, the airline’s top two leaders announced plans to cut international service in April by about 20% and domestic service by about 10%, with similar cuts possible in May. They also announced a hiring freeze through June and said workers in the United States could apply for voluntary unpaid leave. “We sincerely hope that these latest measures are enough, but the dynamic nature of this outbreak requires us to be nimble and flexible moving forward,” Oscar Munoz, United’s chief executive, and J. Scott Kirby, who will take over that job in May, said in the letter. Trans-Pacific flights, for which demand had fallen starkly as the virus seized Asia, will be halved in April, while trans-Atlantic service will be cut by about 10%. Latin American service will be reduced by 5%. In a statement in response to the United announcement, Sara Nelson, president of the Association of Flight Attendants, said the airline was taking “a responsible approach” in responding to the coronavirus outbreak. Business leaders and the administration are seeking to allay concerns about the virus and its toll on the industry. Thomas Donohue, chief executive of the U.S. Chamber of Commerce, said at a news conference Wednesday that the airline industry didn’t need “bailouts,” though he said that if regional airlines encountered difficulties, “we’ll figure out a way to bring assets together to keep them flying.” “Bottom line is we’re going to run just like business as usual, with a little higher heartbeat, and get it done,” he said. Later, at a White House meeting with airline executives, President Donald Trump dismissed a reporter’s question about whether the federal government would provide financial assistance to the industry. “Don’t ask that question, please,” he joked. “Because they haven’t asked it. So I don’t want you to give them any ideas.” Trump and Vice President Mike Pence, who also attended the meeting, sought to allay public fear over the outbreak. “It’s safe to fly,” Trump said. “And large portions of the world are very safe to fly. So we don’t want to say anything other than that.” As the virus has spread, the administration has been in close contact with representatives of the travel and tourism industry, according to Scott Solombrino, executive director of the Global Business Travel Association, an industry group for corporate travel managers. Officials at various agencies addressed concerns and provided updates to industry officials on a Monday call, for example. At the same time, the Centers for Disease Control and Prevention is seeking the authority to compel airlines to share data on passengers and crews arriving from abroad who may be at risk of exposure to the communicable disease. The airline industry has argued that such a requirement would be too onerous and instead recommended that the data be assembled from various agencies that collect passenger information. After the financial crisis, the aviation industry underwent a period of consolidation, during which airlines focused on increasing capacity and efficiency. In recent years, they squeezed profits from new, premium offerings and by harnessing a shift, driven by millennials, toward valuing experiences more highly than goods. As a result, airlines ended 2019 on a positive note, but reports of the coronavirus outbreak began surfacing at the start of January. Before the month was out, it had spread far enough that all three airlines had announced plans to suspend service to China, the center of the epidemic, because of plummeting demand. Since then, shares of United and American Airlines have lost about a third of their value. Delta is down somewhat less, about 18%. United said last week that the effect of the coronavirus on its first-quarter earnings would be offset by lower fuel costs. But it withdrew its financial guidance for the rest of the year. JetBlue also separately said on Wednesday that it would reduce service temporarily by about 5% and would take several steps to shore up cash, including reducing hiring, offering voluntary leave and limiting spending. Since January, airlines have reduced or canceled service to Hong Kong, South Korea, Japan, Italy and other destinations, as demand for travel abroad slid. And while international routes make up only a small share of major airlines’ service, they are significantly more profitable than flights within the United States. But there are growing signs that domestic demand is starting to suffer, too, as concern spreads among the public, corporate events are canceled, and large businesses ask employees to refrain from flying. On Tuesday, Ford Motor Co., which employs nearly 200,000 people, told workers to stop all international and U.S. domestic air travel and to use videoconferences as much as possible for critical meetings. General Motors, which employs about 164,000 people, has stopped all worker travel to China, Japan, South Korea and Italy, and restricted international travel to other locations only for essential matters. How long such bans will last is unclear, according to a poll conducted last week by the Global Business Travel Association. Among corporate travel managers who had canceled or suspended employee trips, only 31% expected to lift such restrictions within three months. More than half, 54%, said they didn’t know when the travel would resume. To address similar uncertainty among the broader public, United, Delta and American have all said in recent days that they would waive change fees for flights booked in the coming weeks.

Tweets by @forbes_india
Coronavirus: 'It is unsafe to get packages from China' and other myths
Thoughts on women