On Monday, Amazon announced that it has the most open positions the company has ever had, including full-time and part-time jobs at headquarter offices, technology hubs and warehouses 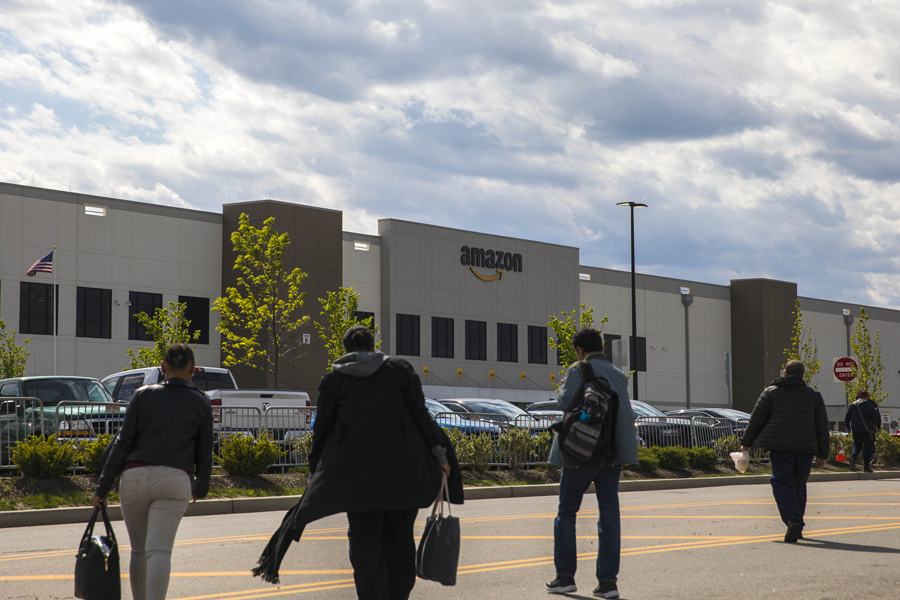 FILE -- Amazon workers outside the company's fulfillment center on Staten Island, New York, May 15, 2019. On Sept. 9, Amazon said it had 30,000 open positions in the United States, including full- and part-time jobs, in corporate and tech roles, in locations ranging from headquarters offices to tech hubs to fulfillment centers. (Hiroko Masuike/The New York Times)


SEATTLE — Engineers in the Bay Area. Advertising managers in Chicago. Freight specialists in Arizona. The job listings keep piling up at Amazon, a company that is growing in many directions amid one of the tightest labor markets in memory.

On Monday, Amazon said it had 30,000 open positions in the United States, including full- and part-time jobs at headquarters offices, technology hubs and warehouses.

Although the company has positions to fill across the country, Amazon’s job boards list many more openings in the Seattle area and California and by its new campus near Washington, D.C., than it does anywhere else.

The vacancies, which Amazon said it hoped to fill by early next year, are permanent jobs and do not include seasonal positions for the warehouse workers and drivers that the company typically hires to handle the spike in orders it gets around Christmas. More than half of the jobs are tech-oriented, and roughly a quarter are for warehouse work, the company said.

It is the most open positions the company has ever had, Amazon said.

The large number of openings is the latest sign of how the company’s ambitions are colliding with the reality of strong labor markets for both white- and blue-collar workers. Last fall, Amazon raised the minimum wage at its warehouses to $15 an hour, and this summer, it said it would spend $700 million to retrain about a third of its American workers to perform tasks that required advanced skills. The effort included a major push to improve the technical expertise of corporate and tech-focused employees, such as turning entry-level coders into data scientists.

In August, the national unemployment rate remained near a 50-year low at 3.7%, even as hiring slowed in the face of the trade war between the United States and China and lagging global economy.

Amazon had 653,300 employees around the world at the end of June, not including temporary workers and contractors. Just fewer than half of those are in the United States. The company also has a so-called shadow workforce of contractors that includes drivers delivering packages to customer service representatives who help sellers on Amazon’s marketplace.

As traditional retailers continue to close stores and antitrust concerns about big technology companies swirl in Washington, Amazon has increasingly used its growing workforce as a political tool. Amazon brings employees on tours of Congress, giving lawmakers protective vests emblazoned with the names of warehouses in their home states. The company also issues frequent reports and news releases like the announcement Monday about the jobs it has created.

In a sign of how important hiring and the politics surrounding it have become for the company, the release Monday included a quote from Jeff Bezos, Amazon’s founder and chief executive. Usually, Bezos’ top deputies or other company executives are quoted in such announcements or made available for interviews with the news media.

Amazon has signaled to investors that it is entering a reinvestment cycle, where its costs will increase as it seeks to expand in strategic areas. In its latest earnings call with Wall Street analysts, the company highlighted the recent growth of the sales and marketing staffs for its cloud computing services and for the logistics and transportation networks it is building to make deliveries.

The 30,000 open positions do not herald one major new investment, as was the case two years ago when Amazon said it would search for a second headquarters to complement its home in Seattle, which has all but turned into a company town. Amazon said that adding the new headquarters would create 50,000 jobs.

The company is now having to rejigger its hiring plans after stumbling on its idea of splitting the second headquarters between New York City and Arlington, Virginia. Amazon backed out of New York, saying it would take the 25,000 jobs that the city would have gotten and spread them among various places, including New York.

The company has scheduled hiring fairs in six cities on Sept. 17, including Nashville, Tennessee, where it is building a major outpost for its vast logistics operations network, and Arlington, Boston, Chicago, Dallas and Seattle. Boston has been a base for developing the Alexa voice assistant, while Dallas and Chicago have openings for cloud computing engineers and support roles for corporate customers.