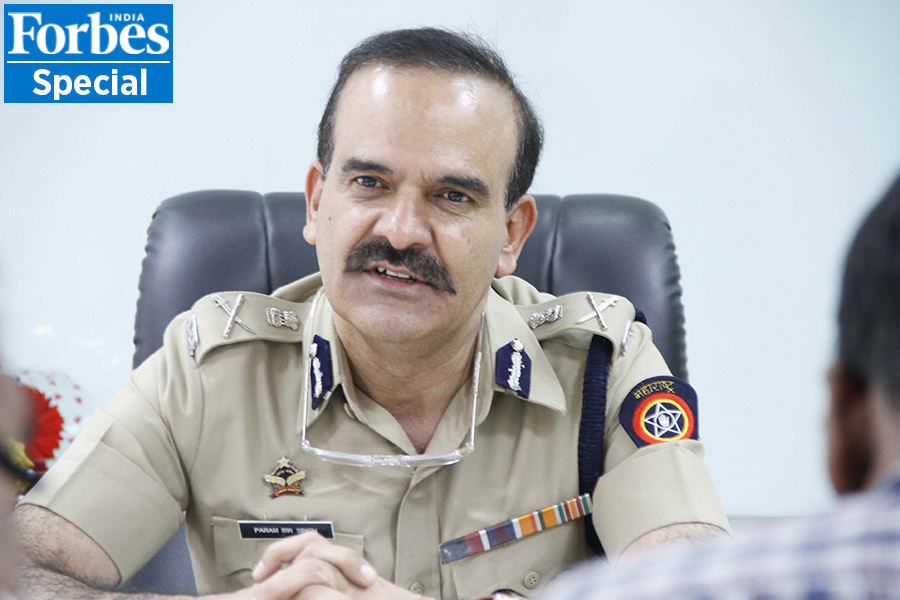 Param Bir Singh, police commissioner of Thane
On October 6, 2016, the Thane police conducted raids on nine ‘call centres’ operating out of Mira Road in Thane district. Some employees from these organisations made calls to US citizens, claiming to be from the Internal Revenue Services (IRS) and extorted money. American citizens were defrauded to the tune of $300 million through this scam which has been in operation since 2013 and targeted 15,000 US nationals. Over 70 people have been arrested and 500 charge-sheeted since then. The Thane police solved the case in record time without any help from their US counterparts.

Sagar Thakkar, 24, also known as “Shaggy Thakkar” is the mastermind behind the fake call centre. He was arrested in early April. He started working at the age of 16 and was mentored by Jagdish Kanani, who is believed to have taught him the tricks of running a fake call centre in 2008.

Forbes India met Param Bir Singh, police commissioner of Thane, who spoke about Thakkar and his fake call centres. Singh, a 1988-batch officer, was previously posted as Additional Director General, SRPF, in Mumbai. The 56-year-old officer has served in various positions during his career with the Maharashtra Police. Edited excerpts from an interview:

Do you think Thakkar is a hardened criminal?
He is more of an ambitious youngster than a hardened criminal. He is a tech-savvy guy. When we asked him how he got into this, he said there were others who were doing this and he decided to get into it. He picked up the tricks of the trade over a few years and started implementing them. It started as a case of intimidating some people he met, but he turned out to be more aggressive and sharper than the others.

Is it a worrying sign?
It is an effort to earn quick bucks. It would be worrisome if it was happening on a large scale and many other people were doing it. We would get worried if it was a trend among the younger generation. But the fact is that it is not.

So this is a case of greed?
Yes. This is absolutely a case driven by greed. It is not driven by need.

Do you think such incidents will harm India's reputation as a call centre destination?
India's reputation should improve and the authorities are serious about it. The integrity of our call centre industry is at stake and so, the government of India has been extremely serious about it. We believe, after our crackdown, such centres that were running in other places have shut down. In fact, our information is that such call centres out of India have completely stopped, but other countries like Pakistan, Russia and China are seeing a rise in such call centres.

So there were other such call centres in India?
Yes. After our crackdown, there has been awareness and the authorities have become very serious about such fraud call centres.

What was the collaboration with the US for this case?
Not much. In fact we are a bit surprised. We had a visit from one FBI agent based out of Delhi some time ago. People from IRS were expected to visit us and there were some people from Hong Kong who were to get in touch with us. But nothing happened. There has not been much cooperation from them. I would say there has not been any interest shown by them. And this is quite surprising.

But the victims were all Americans?
That is what I said. This is surprising. There is no interest from the American side.

What are the steps that you are taking to stop such incidents?
The government of India has taken serious note of what came to light in the Mira Road call centre case. People from the BPO industry met us. They were thankful and happy with the way we handled this case. We are working on some mechanism to prevent such kind of frauds in the future. The case has a multi-fold impact.

Do you remember any other case involving such young and ambitious people?
IT-savvy youngsters taking to such kind of fraudulent activities is something I'm seeing for the first time. Not only this kid, but I we have charged 400 others in this case, making it the biggest case in the country so far. So the task was huge and we had to levy a charge and provide evidence against each person. It was a huge investigation and my team has done a fantastic job.