Fears that the coronavirus pandemic will fuel a global slowdown, with public health officials in Germany and US saying that new patients in each country had no known connections to others with the illness⁠—a development that could further complicate the efforts to track the virus⁠—global markets have been correcting for sixth day in a row, reaching levels that haven't been seen since the 2008 financial crisis 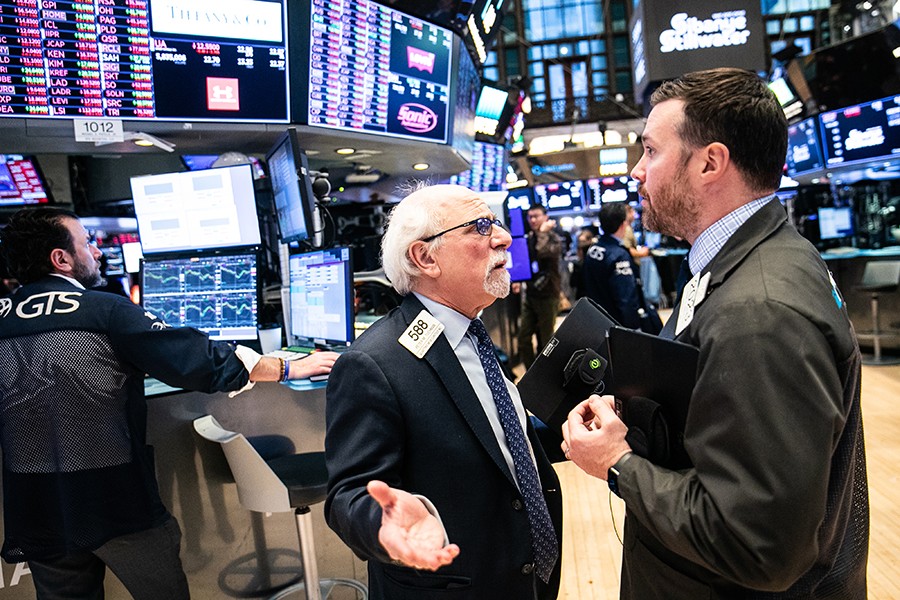 Working the floor of the New York Stock Exchange in Manhattan, Thursday, Feb. 27, 2020. The S&P 500 fell 4.4 percent on Thursday, the worst single day slide for the market since August 2011. (Jeenah Moon for The New York Times)

Global markets tumbled for a sixth consecutive day on Thursday, dragging down the S&P 500 more than 10% in just a week, reflecting rising fears over the coronavirus that is spreading quickly around the world.

The S&P 500 fell 4.4% on Thursday, the worst single day slide for the market since August 2011. The index is on pace for its worst weekly performance since the 2008 financial crisis. Stocks in Europe and Asia were also hard hit on Thursday.

The sell-off came after public health officials in the United States and Germany said new patients in each country had no known connection to others with the illness, a development that could complicate efforts to track the virus. Cases of the virus have appeared in at least 47 countries.

The speed of the market slump has been stunning, with the S&P 500 falling more than 10% from its Feb. 19 high, a drop that Wall Street labels a correction to suggest the decline is more significant than a few days of downbeat trading.

The last time stocks in the United States fell that much was late 2018, when investors worried that the trade war and rising interest rates might tip the U.S. economy into a recession. The Dow Jones industrial average also fell into a correction on Thursday, as did shares in London.

On Wednesday night, President Donald Trump directly addressed the outbreak, putting Vice President Mike Pence in charge of the government’s response and saying “we’re very very ready for this.” While Trump acknowledged the potential economic fallout of the outbreak, he said woes at the aerospace giant Boeing, a strike last year at General Motors and the Fed’s reluctance to slash interest rates have done more to hurt the economy.

But not long after his news conference, health officials reported that a person in Northern California had become sick despite not being exposed to anyone known to be infected with the coronavirus. Doctors said the patient had to wait days to be tested because of restrictive federal criteria.

Officials around the world have struggled to contain the spread of the virus. Prime Minister Shinzo Abe on Thursday asked all of Japan’s schools to close for a month. The country joined China and Mongolia in shuttering schools nationwide over the epidemic.

Health officials in Germany reacted aggressively after a man with no known connection to anyone with the coronavirus tested positive. They closed schools in the community where he lived and reached out to hundreds of people who took part in a Carnival celebration over the weekend where the man was also present, urging them to stay home for two weeks.

Even if the United States does not adopt such extreme measures, an outbreak could prompt a serious shift in consumer behavior, hitting the bedrock of the U.S. economy.

“To the degree that consumers change their behavior — so they stop going out to eat, they don’t take the vacation, they cancel the business trip — that consumption, that spending, personal consumption is 68% of GDP,” said Scott Clemons, chief investment strategist at Brown Brothers Harriman.

He added: “That moves it beyond the sphere of ‘people feel bad because their 401(k)s are down’ and into the sphere of economic reality.”

The collapse in investor confidence spread far beyond stocks. Crude oil fell more than 4%, as investors weighed the chance of growing economic paralysis related to travel restrictions, factory shutdowns and other measures to stop the outbreak.

Bond markets broadcast deep pessimism about the economy, as money flooded into Treasury markets, pushing prices sharply higher, and yields — which move in the opposite direction — to once-unthinkable depths. That drop, in part, reflects investors’ expectations that the Federal Reserve may have to cut interest rates to bolster the economy.

Prices for junk bonds, and even safer corporate debt, fell.

“Stocks and bonds say we’re doomed,” wrote Chris Rupkey, chief financial economist at MUFG Union Bank, in a research note on Thursday. “Anyone who has a better idea for what lies ahead please let us know because right now the direction ahead for the economy is straight down.”

On Thursday, analysts at Goldman Sachs predicted that companies in the S&P 500 would generate no profit growth as a result of the crisis, because of a “severe decline in Chinese economic activity,” disruption in the supply chain for American companies and a slowdown in the U.S. economy.

Microsoft was down 7% after the company said Wednesday that its sales in the current quarter would be lower because of a disruption to its supply chain. Anheuser-Busch InBev on Thursday forecast a steep drop in quarterly profit. Its shares fell 9%.

Companies have also scaled back travel. The French cosmetics giant L’Oréal suspended all business travel for its 80,000 employees until the end of March. Nestlé, the giant Swiss food company, said it would suspend all international business trips for its 290,000 workers until mid-March.

In Europe, the FTSE 100 in Britain, the CAC 40 in France and the DAX in Germany were all more than 3% lower on Thursday. Asian markets closed the day largely down, though shares in China bucked the general trend, with Shanghai rising 0.1%.