When civil servants make decisions based purely on their own personal interests, their decisions are not likely to be of benefit to society

An argument has been rumbling on for years amongst experts concerning the real effect of corruption on a country’s economy. Despite widespread condemnation of corruption, some academics insist that such illegal practices as bribery do in fact grease the wheels of economic growth.

Three main explanations have been given for the potential positive influence of corruption on economic development. It has been suggested that bribes attract a better quality of civil servants. If there is a higher quality of civil servants then, they argue, better economic decisions will be made. Also, bribing implies speeding up the bureaucratic process which could lead to an increase in economic development. Thus, a business leader getting import / export documents quickly from a very busy administration service is likely to be a supporter of the view that paying some extra unofficial fees allows business to be done faster and better. Finally, corruption can be seen as a form of competition for official resources leading to better government services. 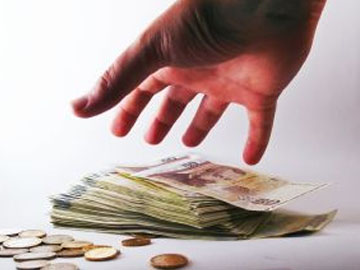 The opposing view is that corruption throws sand in the wheels of economic development. The usual definition of corruption as the “sale of government property for private gain” leads to the intuitive conclusion that corruption has a negative influence on economic growth. When civil servants make decisions based purely on their own personal interests, their decisions are not likely to be of benefit to society.

Three main arguments could be given to highlight the negative influence of corruption on the economy. Firstly, the most important loss in economic growth linked to corruption is due to the inefficient allocation of resources. If a Minister makes a decision according to the highest bribe, little attention would be paid to a country’s or state’s needs. The result can be seen, for example, in an unnecessary splendid building or a crass and expensive project which serves as a front for the hidden money that will flow into the pockets of greedy politicians. In addition, to receive bribes, civil servants will create restrictions to economic development. The more complicated are the rules for obtaining a passport or any authorization, the higher is the opportunity to demand bribes, Furthermore, many private businesses, such as foreign investors dislike corruption and therefore avoid investing in corrupt economic sectors or countries. Bad investments, restrictions to business and less private investments will lead to slower economic development.

In a recent academic article published in the October 2013 issue of the Economics Bulletin, my research showed that corruption should categorically be seen as sand in the wheels of economic development.

To arrive at this conclusion I used macroeconomic data collected by the World Bank over a period of ten years in 120 countries, including India. This large research base allowed me to verify that a higher quality of institutional framework implies a lower level of corruption. By institutions, researchers mean the rules of the games. To assess the overall quality of the institutions, measurements were used concerning for example the law, law enforcement or government effectiveness (quality of public services).

Sustainable development has been defined by the Nobel Prize laureate Kenneth Arrow as “development that meets the needs of the present without compromising the ability of the future generations to meet their own needs”. This is expressed as the sum of the values of investments or disinvestments in each of capital assets. Sustainable economic development therefore takes into account economic development but also includes the changes in the natural resources base and environmental quality as well as the change in the human capital. For example, estimates of the depletion of a variety of natural resources are deducted to reflect the decline in asset values linked with their extraction and harvest. In the same way, pollution damages are deducted.

Tweets by @forbesindia
Most Stimulus Packages Have Been Far Too Small: Tim Harford
Investment Policies, M&A and Alliances