US President Donald Trump stepped out of Walter Reed in the presidential Beast, waving at supporters; far-right calls it a miracle while medical experts reckon it was reckless 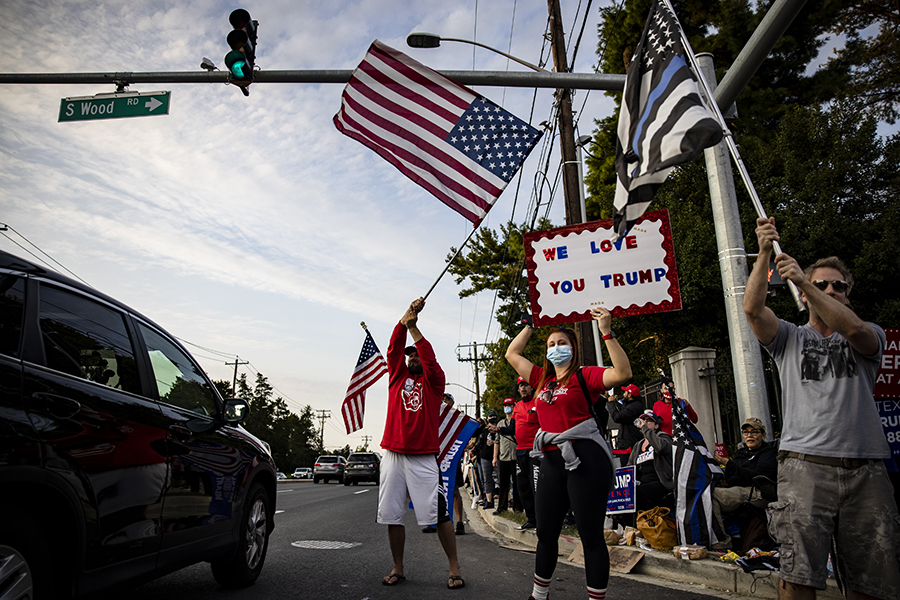 President Donald Trump’s decision to drive by well-wishers outside Walter Reed National Military Medical Center on Sunday was widely criticized by medical experts as irresponsible for unnecessarily exposing Secret Service agents inside the vehicle to the virus.

“By taking a joy ride outside Walter Reed the president is placing his Secret Service detail at grave risk,” tweeted Dr. Jonathan Reiner, professor of medicine and surgery at George Washington University. “This is the height of irresponsibility.”

Yet many far-right commenters called it something else: a miracle. They said it was evidence that the president was overcoming his illness from the coronavirus.

The Gateway Pundit, a website notorious for regularly spreading misinformation and falsehoods, published an article calling Trump’s drive-by to greet fans a “miracle in Maryland.”

“I believe in miracles,” said another tweet Sunday afternoon, after Trump’s doctor said he could return to the White House as early as Monday. “We are going to see another one in November!”

Others reposted and repeated Trump’s own words in a video he released Saturday that his hospitalization and process of recovery constituted a “miracle from God coming down.”

Alex Plitsas, vice chairman of the Fairfield Republican Town Committee in Connecticut and a onetime contributor to the conservative news and opinion site The Daily Caller, said the people criticizing Trump’s trip past supporters Sunday were hypocritical. He said that they advocated wearing masks to stop the spread of the virus, but that when Trump wore one they said that was not enough to please them.

The Centers for Disease Control and Prevention and the World Health Organization say face coverings are a safeguard but not an absolute guarantee of stopping transmission — especially in a small, sealed space like a vehicle occupied by a person known to be infected, as was the case Sunday.

Plitsas did not immediately respond to a request for comment.

Greg Price, another contributor to The Daily Caller, said the Secret Service agents accompanying Trump during the drive-by had always been at risk because they have been around the president during his bout of illness.

“The point of my tweet was that the safety of the agents didn’t become a big story until President Trump did the drive-by,” Price said in a direct message Monday.

Dr. James Phillips, an attending physician at Walter Reed, said the specific situation of being in a sealed vehicle increased the agents’ risk.

“Presidential SUV is not only bulletproof, but hermetically sealed against chemical attack,” he tweeted. He added that the risk of COVID-19 transmission was “as high as it gets outside of medical procedures.”

The CDC says cloth face coverings help prevent the person wearing the mask from spreading COVID-19 to others, but it does not say wearing a mask fully prevents the spread of the virus. The drive angered some members of the Secret Service, The Washington Post reported.

“Many of the statements that are being pushed by Trump’s supporters have been debunked by medical experts, but at this time, no one is being rational,” said Claire Wardle, executive director of First Draft, an organization that fights online disinformation. “These tweets and the online conversation is not about science or expertise; it’s about emotions and partisanship.”