Getting the kids booked 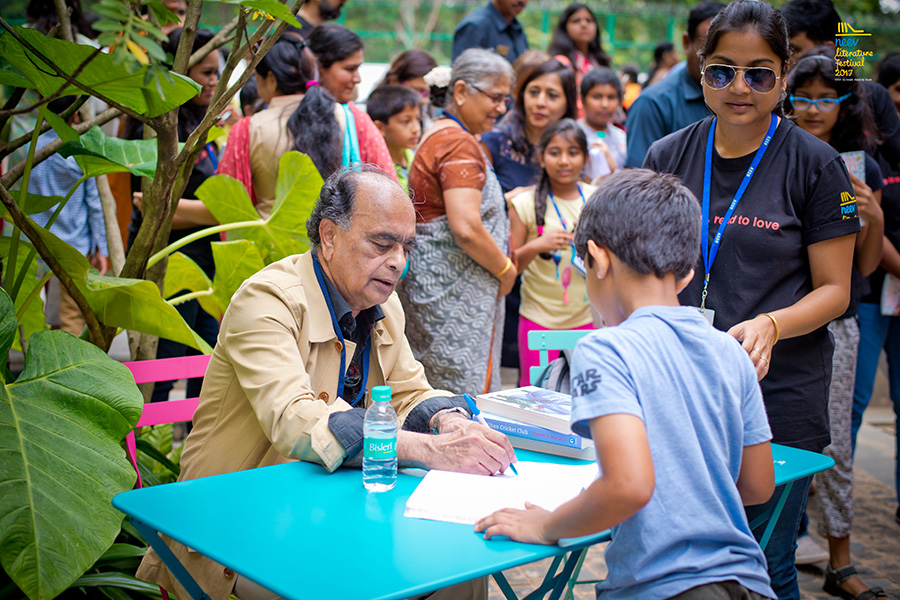 Novelist Timeri N Murari signs a personal copy for a child at NLF 2017
Not too long ago, children who liked reading English stories would be fed the usual diet of Enid Blytons, Roald Dahls, Nancy Drews and Hardy Boys; characters, settings and narratives that were as far removed from India as the authors themselves. “Even when there were stories from India, there were books like [RK Narayan’s] Malgudi Days and [Anita Desai’s] The Village by the Sea. But the world of these books is not the reality of our children today,” says Kavita Gupta Sabharwal, managing trustee of Neev Academy in Bengaluru, and the founder of the Neev Literature Festival (NLF), which focuses on literature for children.

In order to create access, and increase the visibility of children’s books by Indian authors NLF—organised by Neev Academy, and now in its second year—have instituted the Neev Children’s Book Awards. “Although we are starting with just three categories—Picture Books, Books for Young Readers, and Young Adult Writing—and that is how we will proceed for the next year or two, the whole process of selection has raised a lot of questions in our minds,” says Gupta Sabharwal. “For instance, how can you judge an adventure story and a mythological story along the same lines?” A nine-member jury comprising educators, writers and librarians shortlisted 22 books from a longlist of 94 entries for these awards.

The second edition of NLF—inspired by the Jaipur Literature Festival—and held from September 27 to 29 at the Neev Academy, will see 67 speakers and workshop leaders from India and abroad; this is more than double the number of speakers from last year. The festival will also see one day reserved for teachers and librarians, with workshops on topics such as unlearning gender stereotypes and curating libraries.

“As children we learnt about Rani Laxmibai of Jhansi as an example of someone who broke gender stereotypes. But what about more examples? Who are the figures our children will grow up learning about?” ask Gupta Sabharwal. This is where Devika Rangachari’s Queen of Ice assumes significance. The story of the 9th century queen of Kashmir—“replete with blood and gore”, as Rangachari puts it—is one about a woman who shapes her own destiny, despite being written off by fate and family. 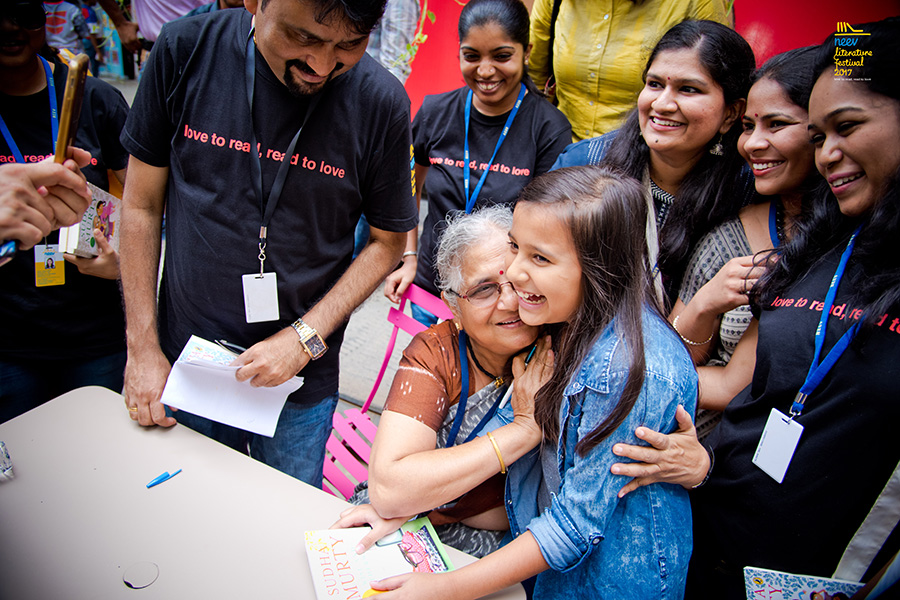 Photo courtesy : NLF
Author Sudha Murthy with a young attendee at NLF 2017
Rangachari says that books for children should reflect the problems that they navigate in their own lives, such as disabilities or dysfunctional families. “For older children, there have been books written about homosexuality, although they have not been very well received,” she says. “However, those books can now be written, they can now exist, which was not the case even a few years ago.”

Authors, educators and experts in this sector agree that the scene today is much more promising than what it was a few years ago. Ritu Vaishnav, who runs a bookstore called KoolSkool in Gurugram, near Delhi, and who has authored Pink and Blue, a book on gender stereotypes, says that publishers entering the children’s books category has made a lot of difference. “There is a big push from publishers—whether they are the Indian arms of international publishers, or new publishers coming up in India—to identify gaps in the market, and address them.”

For instance, she adds, Good Earth Publications is bringing out books on Indian history, while Penguin India has a series on discovering India, with titles such as Off to Rajasthan, Off to Goa; Harper Collins India has books on Indian festivals, while Duckbill has books with a diversity of characters.

The focus on libraries and teachers at NLF this year is a step towards initiating children into the habit of reading from an early age, and helping librarians and teachers curate books, and be more involved in a child’s process of books selection and reading. “There are no non-readers among children; there are just dormant readers,” says Dalbir Kaur, an educational entrepreneur and founder of One Up library, bookstore and experience centre in Amritsar, which works with schools to curate libraries and encourage reading among children. “Usually, books are given to children through libraries, but teachers have little knowledge about whether the children are even reading those books. But those teachers who are more involved are better able to understand their students through the books they read. Neev is addressing a need of how to nurture libraries in schools, and helping teachers go beyond the curriculum.”