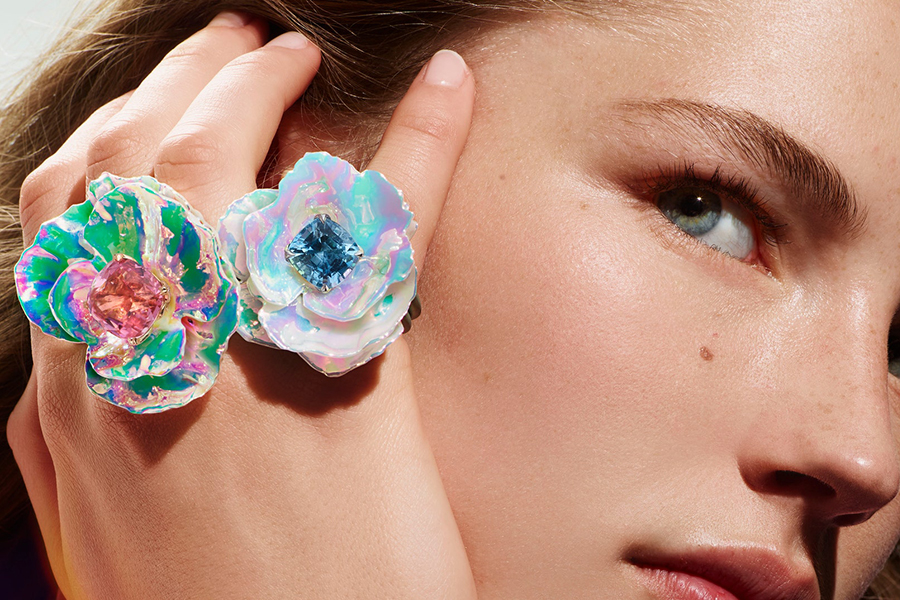 Most international luxury and jewellery houses release their high-jewellery collections every two years as it takes the craftsmen a long time to create these exquisite pieces studded with diamonds, precious stones and rare materials.
After months of lockdowns that postponed several launches, most brands released their collections this year at global, physical events such as Paris Haute Couture Week (July 5 to 8) and Cannes Film Festival (July 6 to 17).
From celebrating the life of Louis Vuitton, founder of the eponymous French luxury brand, to capturing the essence of light and celebrating nature and fantasy, these jewellery pieces leave a lasting impression on viewers and are perfect heirloom pieces for buyers.
Boucheron 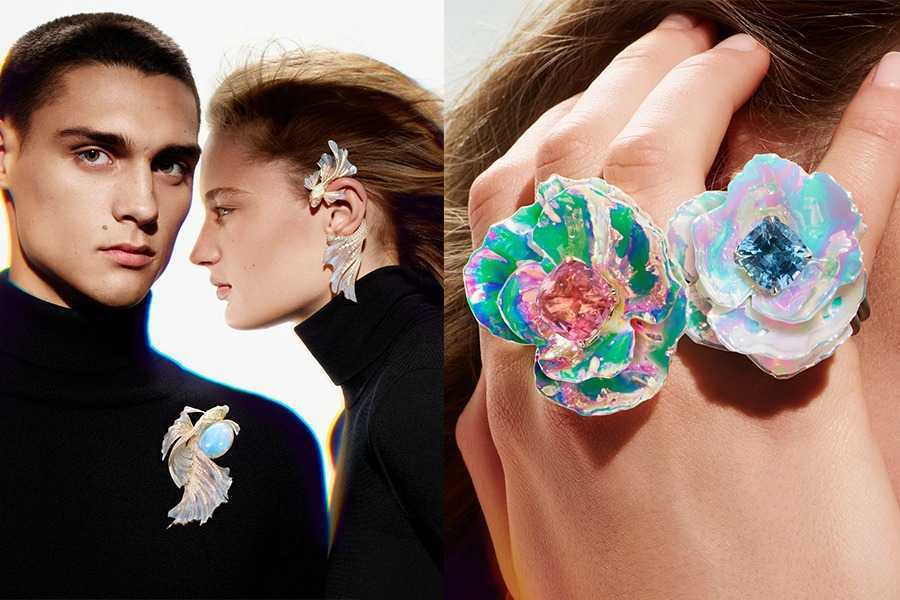 The Carte Blanche collection uses light to create a resplendent array of shades
Image: Boucheron
Boucheron has used the holographic technology used on landing strip markings on airport tarmacs to create its new, rainbow-hued Carte Blanche high jewellery collection.
The holographic assemblage is an unconventional take on colours and uses light to create a resplendent array of shades. Each piece reflects a prism of colours highlighting the complexity of light. The chunky bracelets, necklaces, rings and earrings are made of rock crystal and white ceramic accented with diamonds and colourful centerpiece stones. In this collection, Claire Choisne, Boucheron’s creative director, has tried to visualise the concept of light. “Light has always intrigued me. We live alongside it, in it, without knowing exactly what it is. Does it move? Is it white? Is it multi-coloured?” Choisne said in a press statement.
Cartier 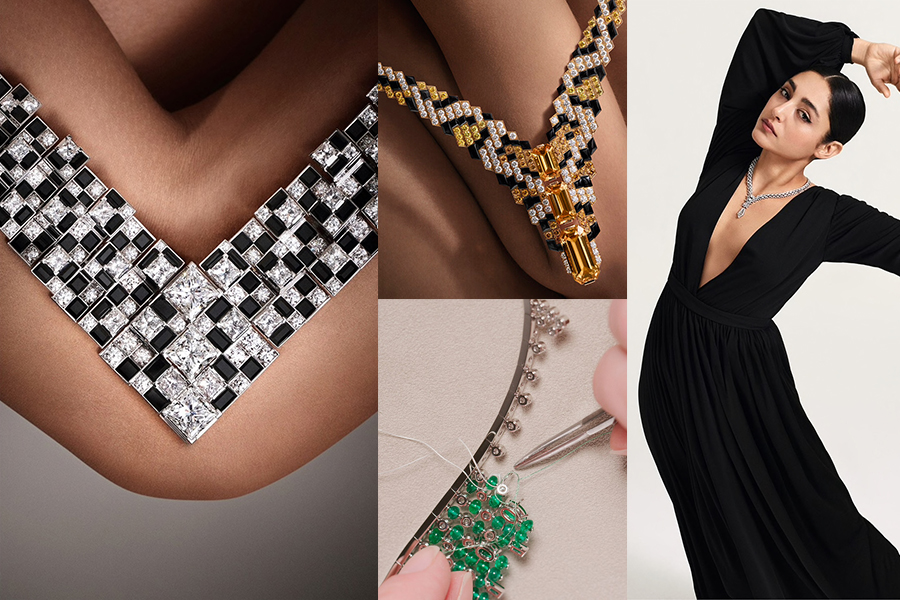 Cartier's Sixième Sens (sixth sense) collection
Image: Cartier
Cartier’s new collection Sixième Sens (sixth sense) uses geometric designs and contrasting textures to create seven necklaces and rings that revolve around the themes of optical illusions and graphic design. The Meride Necklace, with onyx, diamonds and rock crystals in a checkerboard pattern, appears like a graphic design.
The Pixelage Necklace is described by Cartier as a “stylized play on the feline’s coat”. It appears like a pixelated image of the famous Cartier Panther, used in its jewels and watches for more than a century. It is made of polished onyxes, white, yellow and orange diamonds and three gold topazes.
The Parhelia ring has a 21.51-carat sapphire cabochon at the centre, which is surrounded by five semi-circles of diamonds that fan out from each side of the center stone. The width of the ring covers three fingers. A touch of black lacquer creates shadow effects to reinforce the impression of movement in the ring.
Chopard 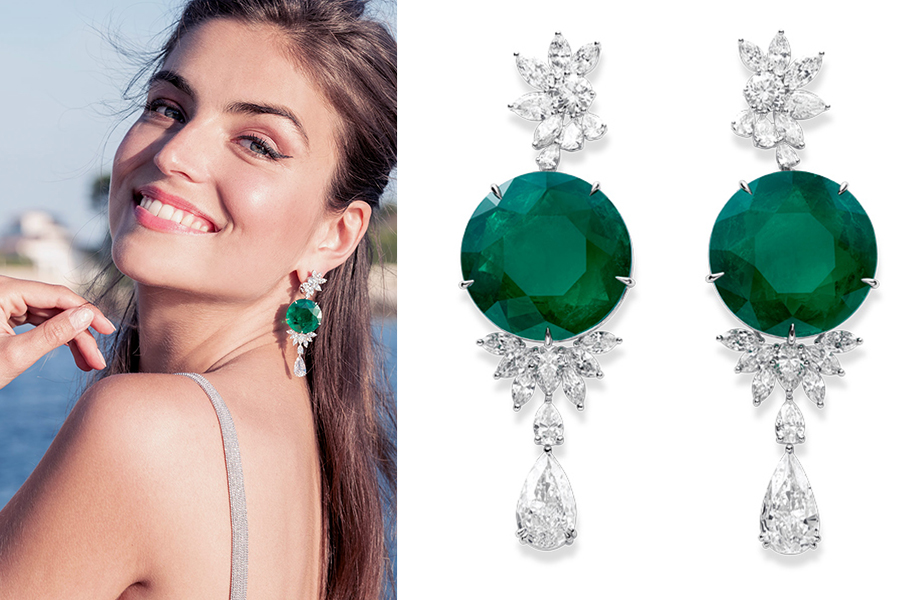 Chopard's Paradise themed-collection collection is inspired by real and imagined fantasies including the bountiful Garden of Eden.
Image: Chopard
Chopard has been the official red carpet jeweller of Cannes Film Festival since 1988. This year, too, Chopard’s Paradise-themed collection’s 74 jewellery pieces including necklaces, rings and earrings, designed by Chopard’s co-president Caroline Scheufele, were worn by supermodel Bella Hadid, American actress Sharon Stone, English actress Amy Jackson and other international celebrities.
Scheufele drew inspiration from real and imagined fantasies including the bountiful Garden of Eden, a place where precious stones are picked like berries, where plants and animals of spectacular colours live. It's a space that resembles the world of James Cameron’s fantasy film Avatar (2009). “I wanted our creations to invite women on a journey towards a comforting haven, an imaginary world brimming with dreams and optimism,” said Scheufele in a press release. “There are various ways of envisaging one’s personal paradise and I have tried to give life to these multiple worlds within the Red Carpet Collection through creations honouring fauna, flora and the finest gemstones, as well as by designing jewellery that is part of the fantasy of movies.”
De Beers 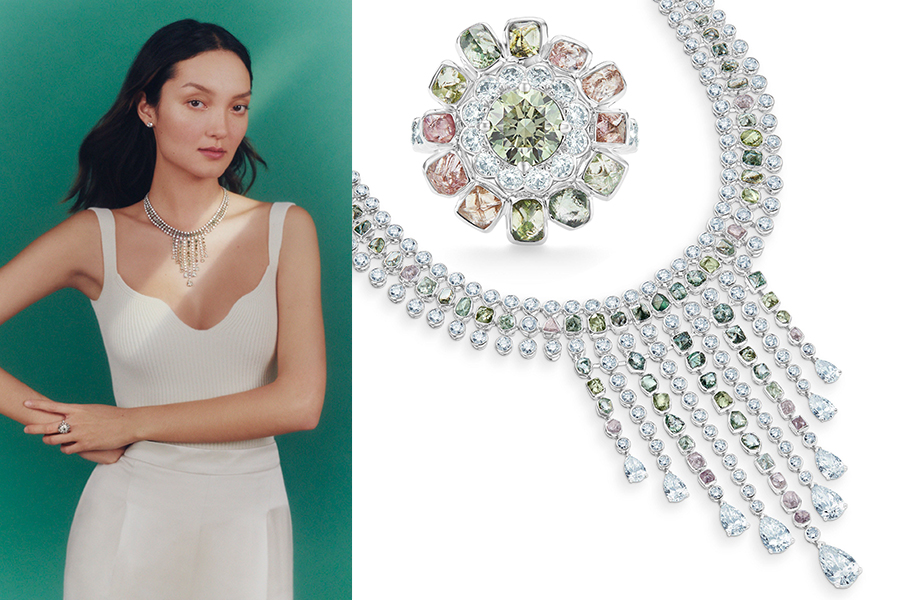 A piece from De Beers' 39-piece Reflections of Nature collection
Image: De Beers
De Beers’ 39-piece Reflections of Nature collection, divided into five chapters, is an homage to locations where the diamonds are mined and an exploration of some of the most scenic places on earth through jewellery made of rough and polished, white and coloured diamonds.
The Okavango Grace set arranges rough diamonds in a vibrant colour scheme inspired by the untamed character and tall, slender reeds of the Okavango Delta, a vast oasis in northern Botswana. A 5.44-carat ring with a 1.01-carat diamond at its centre, surrounded by white jewels, replicates the effect of the shimmering water found in the African wetlands.
Another set, Namib Wonder, that has climber and drop earrings in round pavé diamonds, references the picturesque dunes of the oldest desert in the world, the Namib, in western Namibia.
Dior 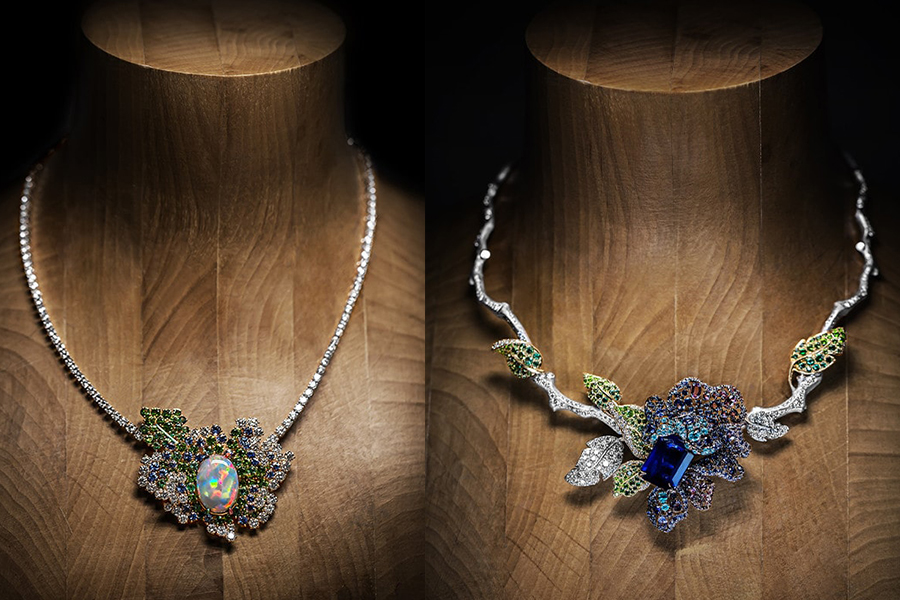 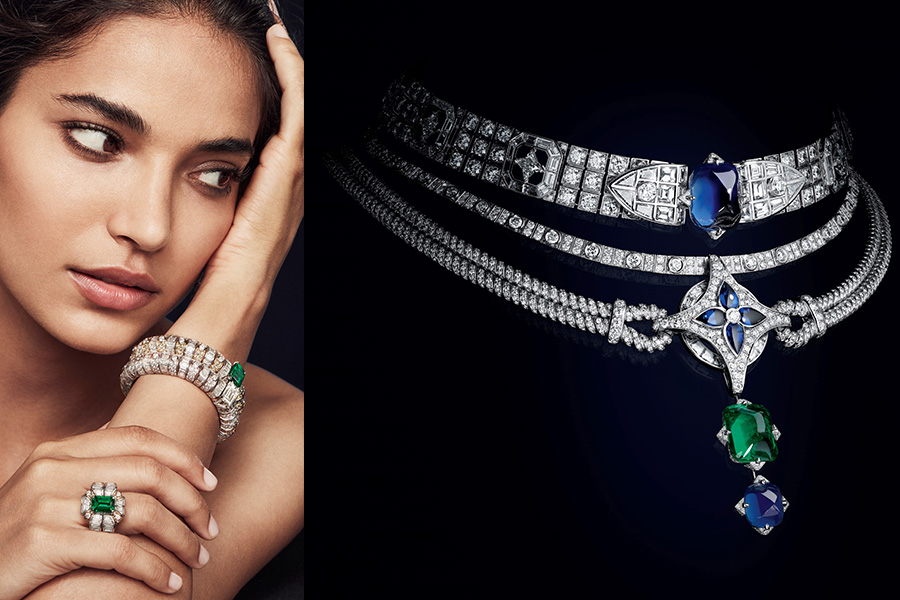 Louis Vuitton's new collection titled Bravery is a 90-piece ensemble of necklaces, rings, earrings and brooches
Image: Louis Vuitton
French luxury brand Louis Vuitton celebrates the 200th birthday of its founder, after whom the brand is named, with a new high jewellery collection called Bravery. The 90-piece ensemble of necklaces, rings, earrings and brooches reflects Vuitton’s legacy and his impact on the luxury industry.
Louis Vuitton’s artistic director for jewellery and watches Francesca Amfitheatrof took design ideas and references from the maison’s archives to create Bravery, which is like a biography of Vuitton depicted in jewellery. The collection is divided into eight chapters, chronicling Vuitton’s life.
The first chapter, La Constellation d’Hercule, was named for the constellation under which Vuitton was born on August 4, 1821. Its necklace is made up of tanzanite, tsavorite and Australian opals that represent a starry night.
The La Flêche necklace’s three rows of platinum, yellow gold and white gold, pavé-set with diamonds and Colombian emeralds represent forests. It refers to the time when Vuitton left home at the age of 13, a few years after his mother died. It took him three years to travel 250 miles from the rural Jura region in eastern France to Paris, learning how to design products along the way. “Driven by his curiosity about the world, he embarked on that incredible journey across France. That’s why we have named this collection Bravery,” said Amfitheatrof in a press statement. “It’s not a word often used in high jewelry. Yet these notions of determination and adventure are intrinsic to Louis Vuitton, and we wanted to express them through this collection.”
The most important piece of the collection is the three-row Le Mythe necklace that combines several Louis Vuitton signatures, including the Damier (checkerboard) pattern, studs and motifs inspired by trunk locks, and the flower icon. Encrusted with sapphires, emeralds and diamonds, it represents Vuitton laying the foundations of his brand, which is now one of the most desired labels in the world.

Tweets by @forbesindia
A Journey through the Metamorphosis of Dermatology in India: Three Decades Experience
Ringworm Outbreak of India: The despicable dermatological disease