Presidential candidate Joseph R. Biden Jr. laid out a populist economic vision with the tagline "Build Back Better," part of an effort to confront President Trump on his strongest issue in polling

By Shane Goldmacher and Jim Tankersley 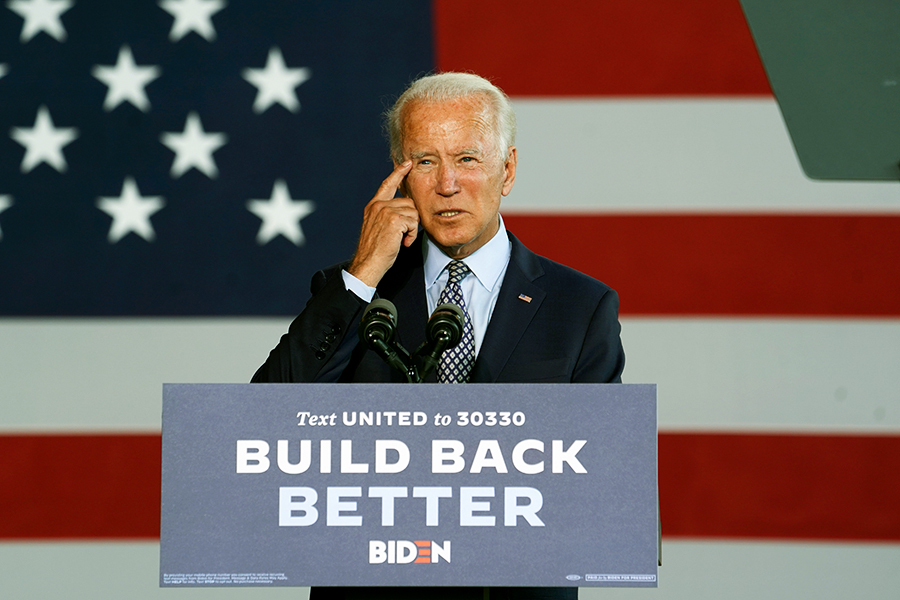 Joe Biden laid out a populist economic vision to revive and reinvest in American manufacturing Thursday, calling for major new spending and stricter new rules to “Buy American” as part of an effort to more aggressively challenge President Donald Trump on two of his signature issues: the economy and nationalism.

In a speech in the battleground state of Pennsylvania, Biden lacerated Trump for a bungled response to the coronavirus pandemic that has deepened the economic crisis and a misplaced focus on the stock market, while framing his own economic agenda around a new campaign tagline: “Build Back Better.”

“I do not buy for one second that the vitality of American manufacturing is a thing of the past,” Biden said, speaking at a metalworks factory in Dunmore, not far from his childhood home of Scranton, a place where Biden often returns rhetorically to emphasize his blue-collar roots.

“When the federal government spends taxpayers’ money, we should use it to buy American products and support American jobs,” he added.

On the same day, Vice President Mike Pence embarked on a Trump campaign bus tour across Pennsylvania, a sign of the state’s significance in the Electoral College calculations of both campaigns.

Biden’s campaign is riding high in the polls, but his advisers, as well as Republican strategists, still see the economy as perhaps his area of greatest vulnerability against Trump. The president’s campaign — and the president himself when on message — has tried to argue that he oversaw a booming economy until the coronavirus pandemic brought about an “artificial” slowdown.

House Republican leaders recently briefed their members on polling showing Trump’s enduring advantage on the economy, and a recent New York Times/Siena College poll showed the economy as perhaps a lone bright spot for the president, even as he trailed by 14 percentage points overall.

In some ways, Biden was seizing the “Buy American” message from Trump, who campaigned on an “America First” agenda in 2016 and wrote on Twitter on his Inauguration Day that “Buy American” was one of “two simple rules” that would guide his administration. (The other was “hire American.”)

Biden has long cast himself as a champion of the American worker, particularly as vice president, when he led the Obama administration’s Middle Class Task Force and oversaw implementation of the 2009 economic stimulus bill. But he has faced criticism from Trump and from former liberal rivals like Sen. Bernie Sanders over his support for the North American Free Trade Agreement in the 1990s and other trade deals that followed.

On Thursday, the Trump campaign announced a new television ad attacking Biden’s record as “dangerous and foolish,” highlighting Biden’s vote for NAFTA in 1993 and his past support for trade relations with China and for the Trans-Pacific Partnership as vice president.

The Pennsylvania speech is the first of several steps Biden is taking in the coming weeks to detail an expanded economic agenda, beyond what he proposed in the primaries. On Thursday, Biden specifically proposed a $300 billion increase in government spending on research and development of technologies like electric vehicles and 5G cellular networks as well as an additional $400 billion in federal procurement spending on products that are manufactured in the United States.

Biden described it as a level of investment “not seen since the Great Depression and World War II” and emphasized that among his top priorities is to expand prosperity to all corners of the country, both racial and geographic.

“This money will be used purposefully to ensure all of America is in on the deal, including communities that historically have been left out: Black, brown and Native American entrepreneurs, cities and towns everywhere,” he said.

Biden’s campaign is rallying top surrogates in key battleground states to amplify and showcase his economic message Friday: Sen. Amy Klobuchar of Minnesota will hold a roundtable discussion aimed at Arizona voters; Sens. Tammy Duckworth and Tammy Baldwin will do one for Wisconsin; Gov. Gretchen Whitmer of Michigan will headline one for her state; and Sen. Sherrod Brown of Ohio will hold one for his state.

His campaign aides cheered on Twitter that the three leading cable news networks — CNN, Fox News and MSNBC — carried Biden’s speech live, even as his remarks were briefly interrupted by a audible downpour at the plant.

As Trump has increasingly focused his campaign on stoking white resentment and fears, Biden and his campaign have stressed their efforts to increase opportunities for Black, Latino, Asian American and other workers. “An economy for every American,” Biden said Thursday.

“Donald Trump may believe that pitting Americans against Americans may benefit him. I don’t,” he said. Later in his speech, he invoked Trump’s recent comments defending the Confederate flag and accused the president of being “determined to drive us apart.”

While Biden has said in speeches since he began his campaign more than a year ago that Wall Street is not the true economic engine of America, he sharpened his tone Thursday, saying it was “way past time to put an end to shareholder capitalism.”

He lashed Trump, in particular, for his focus on the stock market as a metric of success as tens of millions of Americans have been driven to file jobless claims during the ongoing pandemic. “Throughout this crisis, Donald Trump has been almost singularly focused on the stock market, the Dow, Nasdaq,” Biden said. “Not you. Not your families.”

Aides also said that Biden would propose additional deficit spending next year to help the economy recover from the recession caused by the pandemic, building on the more than $3 trillion in new borrowing that Congress and Trump have already approved amid the crisis.

Biden has thus far proposed to offset the entirety of his spending plans with nearly $4 trillion in tax increases, largely by reversing some of Trump’s signature tax cuts for high earners and otherwise raising taxes on the wealthy and corporations. Aides said he would do the same to fund his procurement and research plans.

Biden proposed the smallest amount of new federal spending among the major Democratic contenders during the presidential primary race, and his plan, despite its new spending, remains far less expensive than those proposed by his former rivals, like Sanders of Vermont and Sen. Elizabeth Warren of Massachusetts.

Biden has sought to straddle the line on economic policy and elsewhere between his moderate political instincts and a progressive wing of the party that lined up in the primaries behind candidates, like Sanders and Warren, who promised sweeping and systemic change.

On Wednesday, a Biden-Sanders “unity task force” published 110 pages of platform recommendations, including plans on the economy. Its recommendations included more sweeping proposals than Biden has embraced in the campaign, including a New Deal-style federal jobs program to use government funds to put Americans to work on infrastructure and other projects. The recommendations also included a so-called baby bonds proposal that would seek to reduce wealth disparities between Black and white Americans by giving every child in the country a government-funded savings account.

Biden is planning four rollouts before the Democratic National Convention in August on his plans to “mobilize the American people” for challenges in a future Biden administration. The speech Thursday was the first in the series.

The next three, according to a campaign document, will be on “modern infrastructure and an equitable, clean energy future,” then a plan “to build a 21st-century caregiving and education workforce” followed by a plan “to advance racial equity in America.”

Tweets by @forbes_india
The coronavirus can float in indoor air, WHO concedes
Fresh air, fresh profits: How Covid-19 kindled this campsite empire