As the lodging industry collapses amid the pandemic, entrepreneur Warren Meyer has found the only sure thing. His biggest obstacle: Government lawyers 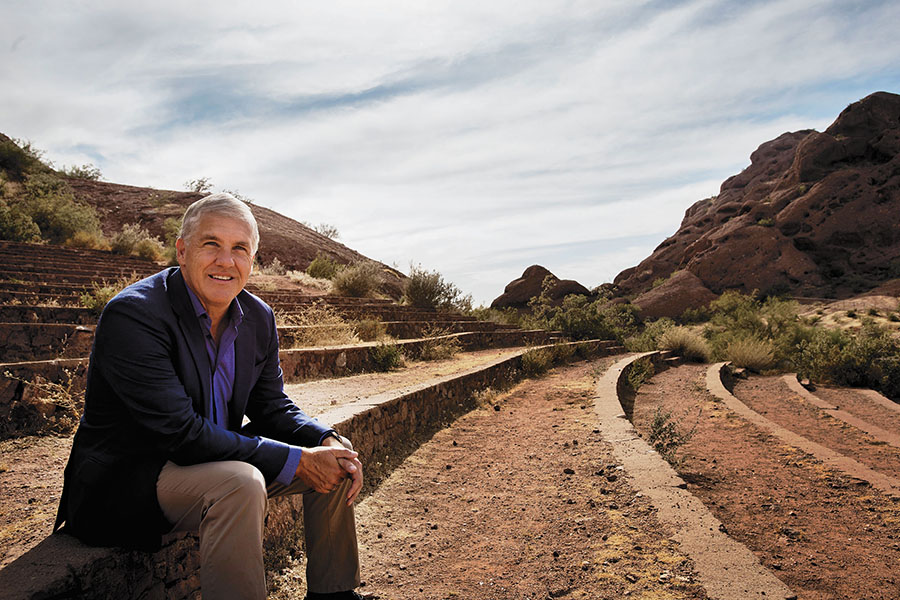 Happy Campers: Warren Meyer, near his home office in Phoenix. While some travel companies are off 95 percent, his bookings for June are up 5 percent from last year
Tim Pannell for Forbes

Warren Meyer, hospitality entrepreneur, looks out with pity on his industry. “There are restaurants that are closing for good,” he says. “Airlines have to give up half their seats.” Relatively speaking, he’s prospering: As Memorial Day approached, a third of his 150 locations were gearing up to open, and he’s anticipating that he will break even this year, which counts as a big win for his decimated field in 2020.

It boils down to the old real estate axiom of location, location, location. While it may be years before people crowd into a hotel lobby, they are clamouring to get into his establishments: Meyer’s Recreation Resource Management (RRM) runs campgrounds and trailheads on publicly owned parkland in eight states. His clients: the US Forest Service, state and county park departments and dam owners like the Tennessee Valley Authority. They are sometimes grudging partners, a reflection of the belief among environmentalists and policymakers that there is something villainous about a capitalist making a profit off public land. But as predictably as autumn leaves falling, government agencies running short of cash want to discuss a lease.

At every location, Meyer says, he pays more in rent to the government than he keeps for himself as profit. Most of those agencies were losing money on the campground before handing it over to RRM.

The pandemic is a mortal threat to the travel industry, but not to RRM. Most of its visitors (2.4 million last year) live within a gas tank’s drive of their destination. And to locked-down America, the great outdoors never looked so appetising. At one of his Arizona camps, Meyer says, a hundred frustrated customers jumped over closed gates to use a park illegally. “A lot of government campgrounds were built with social distancing as the ethic,” he says. The price is right, too: Usually between $22 and $26 a night, with a 50 percent discount for Forest Service visitors, roughly a third of them, who whip out a senior-citizen pass. A site with a hookup to electric, water and sewer lines is a few bucks extra.

Economic chaos, paradoxically, may even help Meyer expand. In the recession a decade ago, as legislative appropriations for maintenance and improvements dried up, state park departments begged him to sign on and pay for amenities like cabins and new bathrooms. Which he’s willing to do, if the lease is long enough. His contracts run from five years to 50.

A government parks department hires environmental-science graduates who collect full-time salaries and costly benefits. With rare exceptions, RRM hires retirees who live in their own RVs at a campground. A lot of them are couples who split up the chores. Most of them are on Medicare. They work part-time and start at minimum wage.

Worker exploitation? Maybe not. Most of the 400 workers return for the next season. Meyer gets 5,000 applicants for the 50 to 100 vacancies.

It was spluttering about left-wing economics that got Meyer ensnared in park management. Not quite two decades ago he published a blog post about privatising government services. A reader who owned a park concession company wanted to know if Meyer had the courage of his convictions. Buy me out! Meyer did.

And so, at age 40, Meyer left freelance consulting and applied his degrees, in engineering from Princeton and business administration from Harvard, to making park visitors comfortable. It’s a hazardous line of work. A bear slashed a camper (Meyer settled a damage claim); an alligator took a liking to a Florida swimming hole used by children. But for Meyer, the scariest critters walk on two legs.

RRM took over a park in California suffering from a serious case of deferred maintenance. Government inspectors came in and condemned a deck with rotting wood. Meyer obediently had the deck removed. Then he was cited for removing the deck without a deck-removal permit. “I thought I was going to jail,” he says. He escaped that contretemps only to get in trouble with California authorities again for putting a kiosk on a parking area. The offense: Failing to do a soil analysis. To satisfy the bureaucrats, RRM had the asphalt cut open, took a soil sample, then replaced the asphalt.

Ferocious lawyers lurk everywhere, especially in California. A state law mandates a half-hour unpaid lunch break. Some workers there asked Meyer, in writing, for permission to work through their break so they could earn an extra half-hour of pay. He agreed. Then a lawyer showed up with demands for damages. The arrangement was invalid because there has to be a separate lunch document for each day rather than one document for all the days. Gotcha! Meyer settled the case.

He refused to settle the lawsuit from the California worker who claimed she was intimidated by her manager—who, as it happens, was her sister. But getting the case dismissed cost Meyer $25,000.

The absurdities of contending with the government as landlord, regulator and adjudicator would exhaust the patience of most business owners. For those who can withstand the torment, though, the rewards are ample enough. Meyer says that in a good year RRM clears a high single-digit profit margin on revenue of $14 million.

Meyer has 6,000 camping spots in his empire. There are another 380,000 sites on public land that he could go after, and he aims to double the size of his operation within a few years. “If I wanted to sit on the beach I could sell for three times Ebitda,” he says. “But I wouldn’t be able to put the money in Treasurys and get the same cash flow.” He plans to keep at it, braving the elements.

(This story appears in the 17 July, 2020 issue of Forbes India. You can buy our tablet version from Magzter.com. To visit our Archives, click here.)

Tweets by @forbes_india
In 'Buy American' speech, Biden challenges Trump on the economy
Timeline: 7 days that did Vikas Dubey in