The agency also explained more directly that people without symptoms may spread the virus. The acknowledgments should have come sooner, some experts said 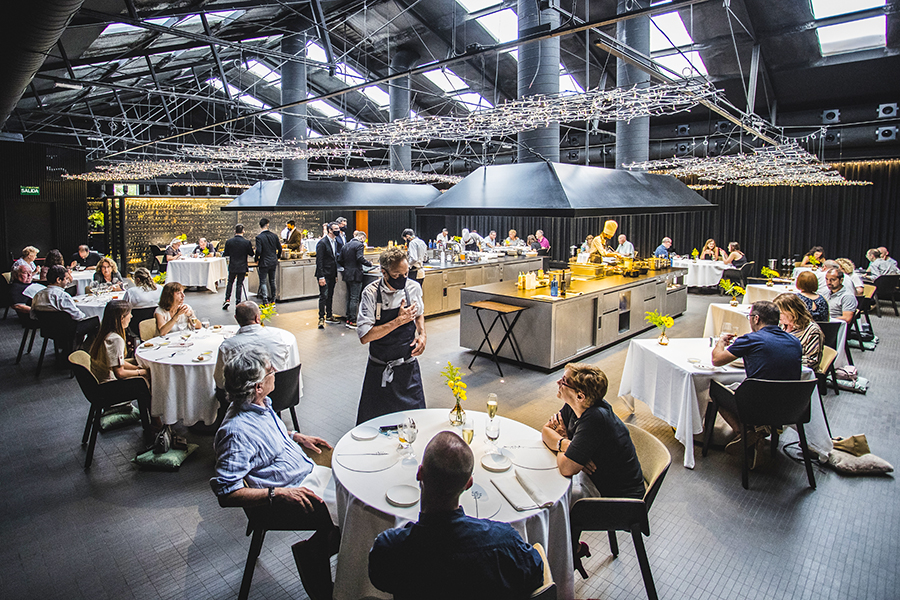 BARCELONA, SPAIN - JULY 04: View of the main space at 'Cocina Hermanos Torres' restaurant, where live together the kitchens and the tables with his customers on July 04, 2020 in Barcelona, Spain. The reopening of the two-star Michelin restaurant 'Cocina Hermanos Torres' in Barcelona, after being closed throughout the period of confinement marked by the country's government, has led to significant changes in the daily operation of the restaurant. The work in the kitchens and with the clients is carried out under strict security measures, and they include more than 40 new anti-COVID protection measures adopted through the advice of an external specialized company in the sector. However, the separation between the tables in the restaurant has allowed them to maintain the capacity for service at 50 customers maximum, as before the COVID-19 crisis.
Photo by Xavi Torrent/Getty Images

The coronavirus may linger in the air in crowded indoor spaces, spreading from one person to the next, the World Health Organization formally conceded Thursday.

The WHO had described this form of transmission as rare and possibly insignificant. But growing scientific and anecdotal evidence suggests this route may be important in spreading the virus, and this week more than 200 scientists urged the agency to revisit the research and revise its position.

The WHO previously said asymptomatic transmission, while it may occur, was probably “very rare.”

Some experts said both revisions were long overdue and not as extensive as they had hoped.

“It is refreshing to see that WHO is now acknowledging that airborne transmission may occur, although it is clear that the evidence must clear a higher bar for this route compared to others,” Linsey Marr, an aerosol expert at Virginia Tech, said in an email.

An aerosol is a respiratory droplet so small it may linger in the air. In its latest description of how the virus is spread, the agency said transmission of the virus by aerosols may have been responsible for “outbreaks of COVID-19 reported in some closed settings, such as restaurants, nightclubs, places of worship or places of work where people may be shouting, talking or singing.”

The WHO had maintained that airborne spread is only a concern when health care workers are engaged in certain medical procedures that produce aerosols. But mounting evidence has suggested that in crowded indoor spaces, the virus can stay aloft for hours and infect others, and may even seed so-called superspreader events.

The agency still largely emphasizes the role played by larger droplets that are coughed or inhaled, or by contact with a contaminated surface, also called a fomite. And in a longer document detailing scientific evidence, the WHO still maintained that “detailed investigations of these clusters suggest that droplet and fomite transmission could also explain human-to-human transmission.”

In addition to avoiding close contact with infected people and washing hands, people should “avoid crowded places, close-contact settings, and confined and enclosed spaces with poor ventilation,” the agency said; and homes and offices should ensure good ventilation.

These recommendations are “what is needed to help slow transmission in communities,” Marr said.

There is debate about the relative contribution of airborne spread compared with transmission by droplets and surfaces. The new guidance still skirts that question.

“I interpret this as saying while it is reasonable to think it can happen, there’s not consistent evidence that it is happening often,” Bill Hanage, an epidemiologist at the Harvard T.H. Chan School of Public Health, said in an email.

After The New York Times reported that an international group of 239 experts planned to call on the WHO to review the research, Dr. Benedetta Allegranzi, head of the agency’s infection prevention and control committee, said Tuesday that the possibility of airborne spread in “crowded, closed, poorly ventilated settings” could not be ruled out.

Outdoors, any virus in small or large droplets may be diluted too quickly in the air to pose a risk. But even a small possibility of airborne spread indoors has enormous implications for how people should protect themselves.

People may need to minimize time indoors with others from outside the household in addition to maintaining a safe distance and wearing cloth face coverings. Businesses, schools and nursing homes may need to invest in new ventilation systems or ultraviolet lights that destroy the virus.

Some experts have criticized the WHO for being slow to acknowledge the possibility of airborne spread while emphasizing hand-washing as the primary preventive strategy. Even in the new guidance, it’s clear that members of the committee interpreted the evidence differently, said Dr. Trish Greenhalgh, a professor of primary health care at the University of Oxford.

“The push-pull of that committee is palpable,” she said. “As everyone knows, if you ask a committee to design a horse, you get a camel.”

Airborne transmission is the most likely explanation for several clusters of infection, including a choir in Washington state and a restaurant in China, according to some scientists.

But WHO staff members have yet to accept the importance of these case studies and instead have “dreamed up an alternative story” in which an infected person spat on his hands, wiped it on something and “magically” infected numerous other people, Greenhalgh said.

The agency’s staff and nearly 30 volunteer experts have spent weeks reviewing evidence on the possible modes of transmission: by exhalation of large and small droplets, for example; by contact with a contaminated surface; or from a mother to her baby.

The WHO easily accepts that droplet and fomite transmission occur but seems to want more definitive proof of spread by aerosols, some experts said. The agency has noted that the virus has not been cultured from air samples, for example, but the same was true of influenza for many years until two groups of scientists figured out how to do it, noted Don Milton, an aerosol expert at the University of Maryland.

WHO staff members are reluctant to make statements when they do not have irrefutable proof of certain phenomena, and they are slow to update their hypotheses, scientists have charged. “They are still challenged by the absence of evidence and the difficulty of proving a negative,” Hanage said.

“The WHO is being overly cautious and shortsighted unnecessarily,” Dr. Julian Tang, honorary professor of respiratory sciences at the University of Leicester in the United Kingdom, said in an email.

“By recognizing aerosol transmission of SARS-CoV-2 and recommending improved ventilation facilities to be upgraded or installed, you can improve the health of people” by eliminating a variety of hazards, including indoor pollutants and allergens, he added. “Isn’t that what the WHO stands for — the improvement of human health from all angles?”

Tweets by @forbesindia
The Roy Chowdhury Saga: How a single family shaped the educational landscape in Eastern India
In 'Buy American' speech, Biden challenges Trump on the economy