In Napa Valley, winemakers fight climate change on all fronts 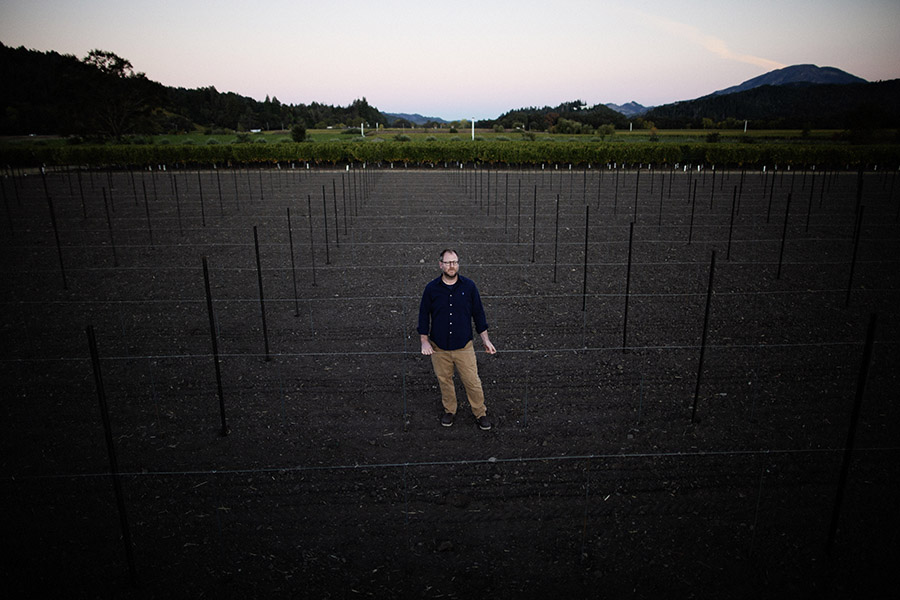 On Labor Day 2017, as the weekslong harvest was getting underway, the temperature reached 110 degrees here in the heart of cabernet sauvignon country. But extreme summer heat has not been the only issue.

An abnormally warm January and February in 2015 set the growing season in motion early. But a cold snap in May caused many growers to lose 40% to 50% of their crop.

This year, in an effort to prevent its equipment from igniting fires, Pacific Gas and Electric has intentionally shut down electrical power, blacking out wide sections of wine country, sometimes for days at a time. Many wineries can’t afford to be without power at the height of fall wine production and were forced to invest in diesel generators and other portable equipment.

These problems were not solely caused by climate change, but its slow, steady effects have intensified the destructive power of fires, heat waves, cold snaps and droughts. If any region has had an incentive to act collectively to try to limit its effects, it would be Napa Valley.

Wine producers are notorious individualists, however, especially in a place like Napa Valley, with many successful alpha personalities who have made wine their second careers. In Napa, sometimes it seems as if more time has been spent talking about perceived threats to the business, like tariffs in China or competition from the cannabis industry, than about climate change.

In the absence of government greenhouse-gas regulations or other mandatory environmental rules intended to combat climate change, what would compel Napa winemakers to change methods that have brought them great success?

“I’ve been asking that question a long time,” said John Williams, the proprietor of Frog’s Leap Winery, an excellent, environmentally sensitive producer in Rutherford. “We have to show people that it’s in their self-interest. I like the term enlightened self-interest.”

The wine industry alone cannot limit or reverse climate change. It will take the equivalent of the response by the government to public health issues: declaring a crisis and acting to change behavior, as it has done with tobacco use.

But agriculture is responsible for a significant percentage of the planet-warming greenhouse gases produced each year, and wine-growing is among the most visible and influential agricultural enterprises in the world. As the best-known American wine region, Napa’s response can be both a model and a call to action.

“We have a desire to create a legacy,” said Molly Moran Williams, industry and community relations director for the Napa Valley Grapegrowers, an association of growers and vineyard managers with more than 700 members. “There’s no permanence without climate resilience, and I think Napa’s really interested in achieving agricultural permanence.”

In the absence of government leadership, it has fallen on trade associations and individuals to take the initiative. But they cannot demand action. They can only seek to persuade. And that takes time.

The grape growers’ group has made climate resilience, its term for practices that would reduce greenhouse gas emissions, part of its mandate.

That means promoting programs in both English and Spanish to reduce water use, promote soil health and life, establish habitats for beneficial wildlife, diminish the need for tractor work and prevent the release of carbon dioxide into the atmosphere from the soil. So far, Molly Williams said, her members have been receptive.

“Farmers are naturally risk-averse, and climate is pretty risky,” she said. “The climate discussion can sometimes get pulled into the political vortex, but one thing that makes Napa special is that there is a dedication to the climate cause and finding solutions, irrespective of political stances.”

Even so, the pace of agricultural change is slow, no matter how urgent. The group has initiated tests to determine how farming without tilling the soil affects carbon savings and water use, which is a crucial issue in Napa. Many farmers would like not to till, which they know keeps carbon from being released into the atmosphere, but they say they would then need to irrigate more.

The trials cannot move faster than the seasons, however.

“Grape growing is always a practice in foresight,” said Molly Williams, who is a daughter-in-law of John Williams of Frog’s Leap. “We know that vineyards have the capacity to sequester carbon. Any local solutions we invest in here and share with the global community, we have a chance to make a difference.”

It’s not all pilot programs and experiments. The group already urges members to compost, a far better alternative to the traditional practice of burning vine cuttings and a proven method of sequestering carbon. If nothing else, it may come back to John Williams’ term, enlightened self-interest.

“We know that good grapes and good wine comes from land that is living and thriving,” Molly Williams said. 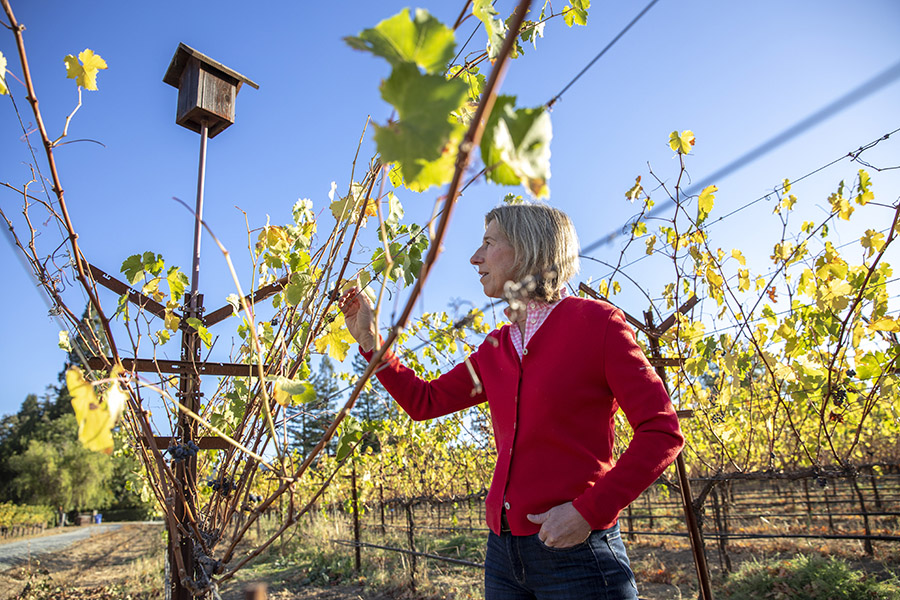 She sits on the board of the Napa Valley Vintners, a winemakers’ association, whose Napa Green program promotes energy efficiency, conservation and environmental action through a third-party certification program for vineyards and wineries.

“The days for sharing information are past,” Milliken said. “It’s time for action because we are not in a good place. My personal goal is to make Napa Valley a leader in this area.”

The biggest problem, Milliken said, is persuading all her peers that climate change is indeed a crisis.

“People don’t want to face fear,” she said. “If you open up to this, it’s scary. People just don’t want to acknowledge it’s real.”

Spottswoode has been farming organically for years. It has promoted soil health and installed solar panels. But it is also adapting for a hotter future.

Milliken and Aron Weinkauf, the winemaker and vineyard manager, are experimenting with rootstocks that might do better in drought conditions, and grapes like alicante bouschet, mourvèdre and touriga nacional that, as Napa warms, might be blended with cabernet sauvignon to maintain freshness, structure and acidity.

For leadership, many in Napa have looked to Jackson Family Wines, a multinational wine company based in Sonoma, but with Napa wineries like Cardinale and Freemark Abbey. Jackson, along with Familia Torres in Spain, has made responding to climate change a centerpiece of its work.

Jackson has been measuring its greenhouse emissions since 2008, said Julien Gervreau, its vice president for sustainability, and has already met its target of reducing them 25% by 2020. He said any winery intent on lowering its carbon footprint must begin by calculating where those emissions originate.

“You can’t manage what you don’t measure,” he said. “You have to understand where the hot spots are.”

The biggest surprise in Jackson’s own audit, he said, was determining that glass bottles, from production to delivery, accounted for a quarter of the company’s greenhouse-gas emissions. By shaving 2 ounces off its average bottle weight, Jackson was able to reduce its emissions by 3% and save money by buying lighter bottles.

Bigger wineries have the resources to take these steps. Opus One is considering such a study, said Michael Silacci, the winemaker. It has made water conservation a priority and has explored other methods of conserving carbon, like composting, capturing carbon dioxide released during fermentation and creating double-walled steel fermentation tanks, which has allowed Opus to do away with chemical coolants and reduce electricity costs.

For smaller operations, it’s not so simple. Steve and Jill Matthiasson are farmers, winemakers and environmentalists. Like many growers, they choose to farm organically because they believe in it, even though it is more costly and labor intensive.

They would like to spend the money on an emissions audit, but as a small business already stretched thin, Steve Matthiasson said, they simply don’t have the time and bandwidth to take on more tasks.

“A greenhouse survey would be really cool, but how are we going to do that?” he said. “We’re a mom-and-pop. We’re lucky if we can comply with OSHA and all kinds of compliance stuff, and manage our importer in Norway.

Dan Petroski, the winemaker at Larkmead in Calistoga, agrees with Milliken that many in Napa have yet to come to grips with the prospect of climate change. And he agrees with Steve Matthiasson that attention span is an issue, even for larger companies.

“We’re not seeing the future because we are so caught up in day-to-day operations,” he said. “Something is always happening, we’re always running to catch up. It makes us somewhat shortsighted.”

Like Milliken, Larkmead is experimenting with different grapes. Petroski has already initiated a study, planting 3 acres with a variety of grapes like touriga nacional, tempranillo and aglianico to determine over the next 30 years what might be better able to withstand a hotter environment than cabernet sauvignon.

“I just want people to think that Napa Valley makes great, delicious California-style wines,” he said. “If this is a great vineyard site, it will grow great grapes. It doesn’t have to be only cabernet or merlot.”