The day after Trump threatened to unleash the US military to rout protesters, the reactions of Republicans underscored the politically precarious choice months before the November elections

By Carl Hulse and Emily Cochrane 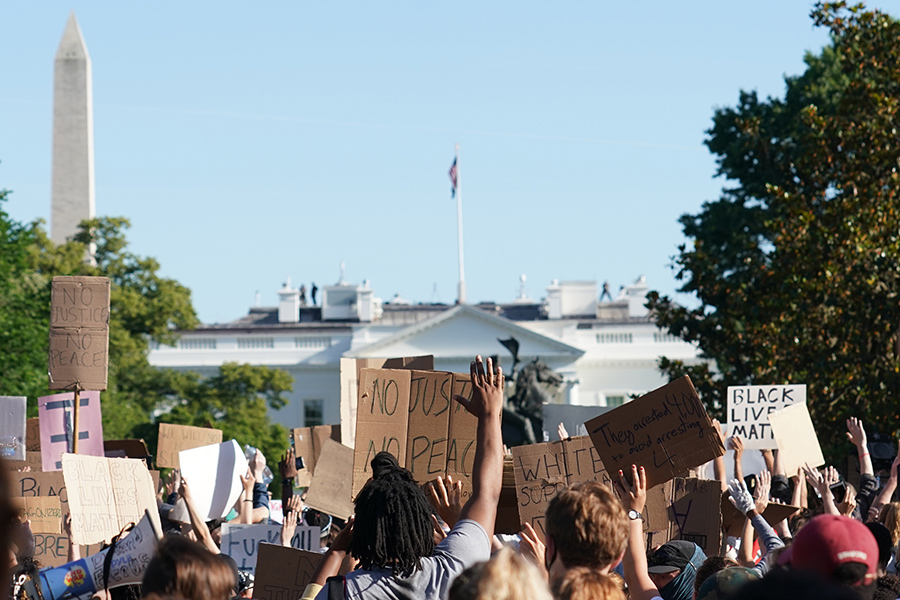 Protests near the White House in Washington, on Monday, June 1, 2020. The president spoke from a White House beset by protesters, and then walked along a path cleared by police to briefly visit a damaged church
Image: Erin Schaff/The New York Times

WASHINGTON — In a rare break with President Donald Trump, multiple Senate Republicans on Tuesday faulted his response to civil unrest around the nation, rejecting his move to crack down on demonstrators and rushing to express sympathy with black Americans who have taken to the streets to protest police brutality against them. The day after Trump threatened to unleash the U.S. military to rout protesters around the nation, the reactions of Republicans — some condemning the president directly, others carefully suggesting that they held a different view — underscored the politically precarious choice they face between endorsing the president’s divisive approach or breaking with him and risking a party backlash just months before the November elections. “There is no right to riot, no right to destroy others’ property and no right to throw rocks at police,” Sen. Ben Sasse, R-Neb., said in a statement. “But there is a fundamental — a constitutional — right to protest, and I’m against clearing out a peaceful protest for a photo op that treats the word of God as a political prop.” Sasse was referring to the remarkable spectacle that unfolded Monday evening when police fired flash-bang explosive devices and tear gas and used officers on horseback to drive away peaceful protesters outside the White House. Minutes later, Trump strode out and marched across Lafayette Square to brandish a bible outside St. John’s Episcopal Church, which had been damaged in a fire during unrest the night before. Sasse’s comments echoed those of Sen. Tim Scott of South Carolina, the only black Republican in the Senate, who denounced the move in unequivocal terms during an event hosted by Politico. “If your question is, ‘Should you use tear gas to clear a path so the president can go have a photo op?’ the answer is no,” Scott said. Those rebukes, and much harsher criticism of the president’s actions by Democrats in the House and Senate, reflected a rising sense of alarm at Trump’s behavior as protests of police violence and racial discrimination reached a boiling point after the death of an African American man, George Floyd, in Minneapolis police custody. With Democrats demanding a legislative response to the issues underlying Floyd’s death, Republicans are facing increasing pressure to back up their critical statements against the president and expressions of concern about persistent racism with something tangible. “We are going to propose and push for bold action,” Sen. Chuck Schumer of New York, the Democratic leader, said Tuesday. “What matters is that we respond to a national wave of unrest with action.” This was hardly the first time Republicans on Capitol Hill found themselves pressed to distinguish between their views and those of a president who in times of trouble often seeks the affirmation of his most conservative supporters. From the moment he took office, Republicans have been called upon to respond to the president’s loaded statements, hyperbolic tweets and scathing criticisms of others as well as his dealings with foreign governments and his positions on harsh immigration measures, trade, congressional authority and other matters. Most Republicans have typically demurred, not wanting to provoke a caustic Twitter attack from the president or alienate party voters devoted to Trump. But the current situation may be the most volatile for Republicans yet, with Americans — already enduring the twin public health and economic calamities of the coronavirus pandemic — almost uniformly outraged at the case of Floyd, whose brutal death after a police officer knelt on his neck for nearly nine minutes was captured on video. Many Americans in both parties are increasingly unsettled by both the violence stemming from the protests and Trump’s demands that governors and local authorities take a harder line. With their hold on the Senate to be decided in an election five months away, Republicans will need the votes of suburban and independent voters if they hope to retain seats in states such as Colorado, Arizona, North Carolina and Maine. In a sign of how lawmakers view the political landscape, moderate Democrats in conservative-leaning districts emphatically rejected Trump’s response to the protests in Washington, suggesting that they see little sympathy for the president’s approach among their constituents. 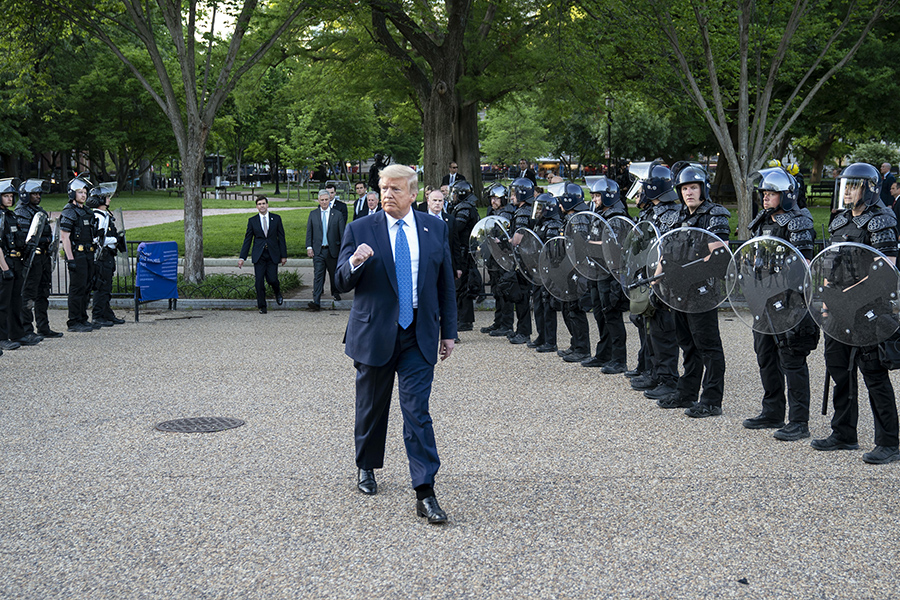 President Donald Trump walks to St. John's Episcopal Church, surrounded by security forces, from the White House in Washington, Monday, June, 1, 2020, for a photo opportunity. The death of George Floyd, an African-American man, in police custody, has ignited protests across the country
Image: Doug Mills/The New York Times Despite Trump anointing himself “your president of law and order,” many Senate Republicans have adopted a much less bellicose attitude, emphasizing the need to get at the root causes of the upheaval — racial discrimination and a well-established pattern of excessive use of force by the police — rather than targeting protesters. “You can understand the outrage,” Sen. Mitch McConnell, R-Ky., the majority leader, said Tuesday about the national anguish over Floyd’s killing. McConnell, whose hometown, Louisville, was in turmoil over Floyd’s death and recent incidents involving police in Kentucky, said the grievances were legitimate and he did not dispute the role racism played in the events. “There is no question that there is residual racism in America,” he told reporters. “No question about that. It has been a longtime dilemma, and we all wish we could get to a better place.” But when Schumer tried to force action on a symbolic resolution to condemn Trump’s actions, McConnell objected, chiding Democrats for pushing a measure that he said addressed neither justice for black Americans nor “peace for our country in the face of looting.” “Instead, it just indulges in the myopic obsession with President Trump that has come to define the Democratic side,” McConnell said. Still, other Republicans joined in the criticism of Trump. “To me at a time like this, the president ought to be trying to calm the nation,” said Sen. Susan Collins, R-Maine, who is facing a difficult reelection race in a state Trump plans to visit this week. She said she found it “painful” to watch peaceful protesters subjected to tear gas so he could go to a church he had visited just once before, and added that Trump “came across as unsympathetic and as insensitive to the rights of people to peacefully protest.” Sen. Lisa Murkowski, R-Alaska, told reporters that Monday’s events did not reflect “the America that I know.” “I don’t think militarization is the answer to the anxiety, the fear, the distrust, the oppression we feel right now,” Murkowski said. “It is not the response.” Even Sen. Lindsey Graham of South Carolina, one of Trump’s chief Republican defenders, said he had been flummoxed by the president’s actions. “I don’t know what the purpose of the trip was,” Graham said. “I do know that last night was a bad night and we need less bad nights.” Not all Republicans agreed. Some fell back on their practiced defense, saying they could not make a judgment because they had not seen the incident, while others defended the president, noting that some of the protests had grown violent and given way to looting. 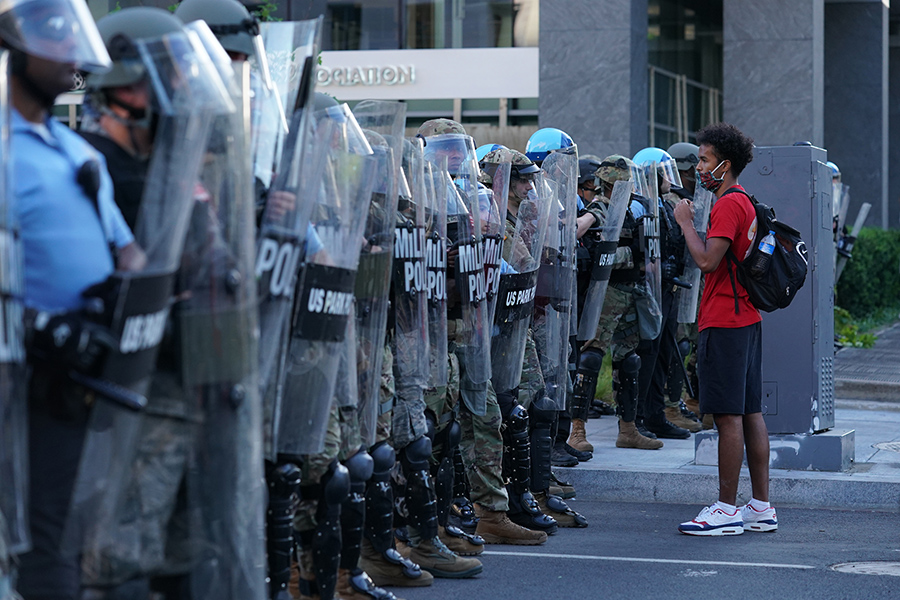 A protester stands near a police barricade in Washington, near the White House, on Monday, June 1, 2020. The president spoke from a White House beset by protesters, and then walked along a path cleared by police to briefly visit a damaged church
Image: Erin Schaff/The New York Times “We have to restore order,” said Sen. Ron Johnson, R-Wis. “This can’t go on. So hopefully, you know, the president talking that way will put a little spine in some of these governors that aren’t calling out the National Guard, to the extent that they need to to restore order.” Johnson claimed not to have seen protesters being violently driven back so that Trump could walk to the church, and Sen. John Thune of South Dakota, the second-ranking Senate Republican, said the episode had been “in the eye of the beholder.” Sen. Ted Cruz, R-Texas, commended Trump, saying, “I’m glad the president led by going to St. John’s Church.” It was the protesters, not the president, who had abused power, Cruz said. Democrats moved quickly to try to take political advantage of the public mood. “It’s time for John Katko to find the backbone to state clearly whether he stands with President Trump or the clergy denouncing his tear gassing of Americans peacefully protesting,” the Democratic Congressional Campaign Committee said in a statement, singling out a third-term moderate Republican from New York who is facing a difficult reelection race in a district Hillary Clinton won in 2016. The committee sent out identical statements about roughly a dozen other endangered House Republicans. Democrats said they were skeptical that Republicans would be willing to challenge Trump too aggressively. They said they suspected that Republicans would treat the issue as they had gun control in the past, promising action immediately after mass killings but letting the issue pass quietly without action once the uproar subsided. But Democrats made clear that they did not intend to let the issue go. “I’ve heard words from people on both sides of the aisle, speaking toward the injustice of racism that exists in our country — I’ve heard words,” said Sen. Cory Booker, D-N.J., in a passionate floor speech. “It’s on us in this body to do something.”