WeWork lost $1.25 billion in the three months that ended in September, up from $497 million in the same period a year earlier. The numbers show why WeWork's planned initial public offering became a spectacular flameout 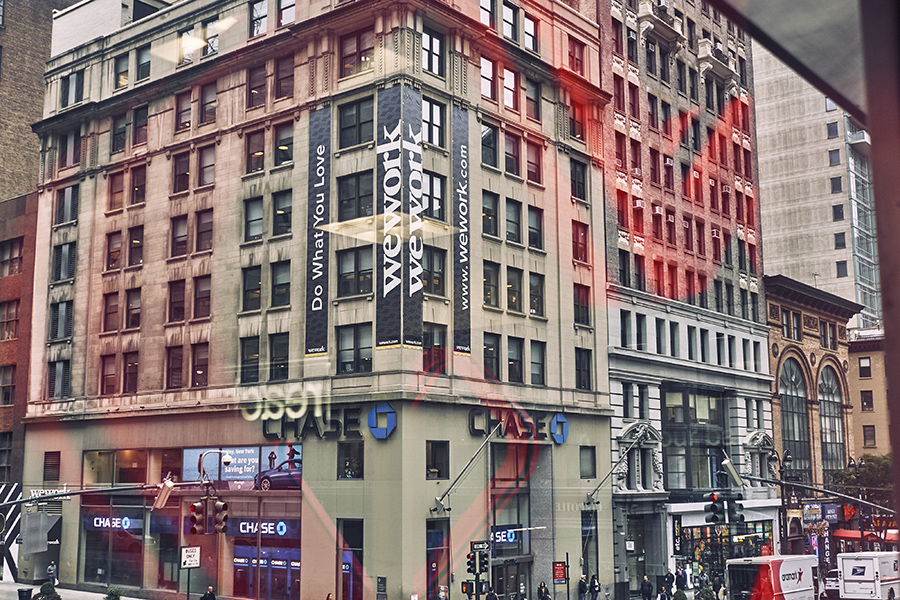 A WeWork location in Midtown Manhattan, Oct. 22, 2019. The rapid expansion of WeWork’s office-space empire caused the company’s losses to balloon in the third quarter, according to a company presentation. Image: An Rong Xu/The New York Times

The rapid expansion of WeWork’s office-space empire caused the company’s losses to more than double in the third quarter, according to a company presentation.
WeWork lost $1.25 billion in the three months that ended in September, up from $497 million in the same period a year earlier, according to the document, obtained by The New York Times. Revenue increased about 94%, to $934 million. The numbers show why WeWork’s planned initial public offering became a spectacular flameout. The company was forced to withdraw the offering in September after investors grew nervous about the company’s finances and its unusual corporate governance. Adam Neumann, its co-founder, stepped down as chief executive under pressure. Vicki Bryan, chief executive of Bond Angle, a research firm, said WeWork should have told investors during the IPO process that losses were escalating in the third quarter. “They knew the bulk of this and kept the public in the dark,” she said. WeWork leases office space, refurbishes and then rents it out to its customers. In the belief that there is a growing appetite for such space, it has added hundreds of new locations around the world. But doing so has cost hundreds of millions of dollars. At the end of September, WeWork’s presentation said, the company had $2 billion in cash, a number that included $692 million of restricted cash. That sum compares with slightly over $3 billion in total cash at the end of June, implying the company used $1 billion of cash in three months. The document did not, however, provide a cash-flow statement that would show exactly how much cash the company spent in the quarter. SoftBank, WeWork’s largest outside shareholder, moved last month to rescue the company. It accelerated an equity investment and announced plans for WeWork to sell bonds to investors. SoftBank’s overhaul of WeWork involves getting out of noncore businesses and focusing on profitable markets. The company is also expected to lay off thousands of employees in the coming weeks. WeWork disclosed its financial performance through the end of June in documents it filed for the IPO. Because it scrapped the offering and remains a private company, WeWork is not required to publicly release financial statements. The latest numbers come from a presentation of selected financial data that is provided to investors who own WeWork bonds. Occupancy at WeWork’s locations is declining, according to the presentation. In the third quarter, WeWork had enough members to fill the equivalent of 79% of available desks at the company’s locations, down from 84% a year earlier. Such a dip might be expected because WeWork was opening locations at a fast clip. But occupancy dropped even at locations open more than two years, to 87% in the third quarter from 90% a year earlier. Older locations are generally more profitable than new ones, in part because they have had time to fill up. The presentation reveals the eye-popping rate at which WeWork has been adding space. At the end of September, WeWork had 625 locations, an 87% increase from a year earlier. It is now in 127 cities, up from 83. WeWork is not out of trouble until SoftBank’s rescue plan is in place. As part of the bailout, SoftBank, led by the investor Masayoshi Son, made a $1.5 billion investment in WeWork equity last month. Under the plan, WeWork would also sell over $2 billion of bonds to raise new money, though it is not clear how much appetite exists for the company’s debt. Its existing bonds have plunged in price. SoftBank’s plan also involves buying WeWork stock from existing shareholders, including Neumann. But while its purchases would give it nearly 80% of WeWork’s stock, SoftBank would end up with just under half of WeWork’s voting power. It is not clear how SoftBank intends to exert control without a majority of the votes. A financial metric that the company likes to emphasize in its communications with investors also weakened in the third quarter. That metric, which the company calls its “location contribution margin” and does not include significant costs, fell to 9% in the quarter, down from 12% a year earlier.