"Can you imagine if I had a secret Chinese bank account?" the former president asked, referring to a recent Times report, as he returned to the campaign trail in Philadelphia to stump for Joe Biden 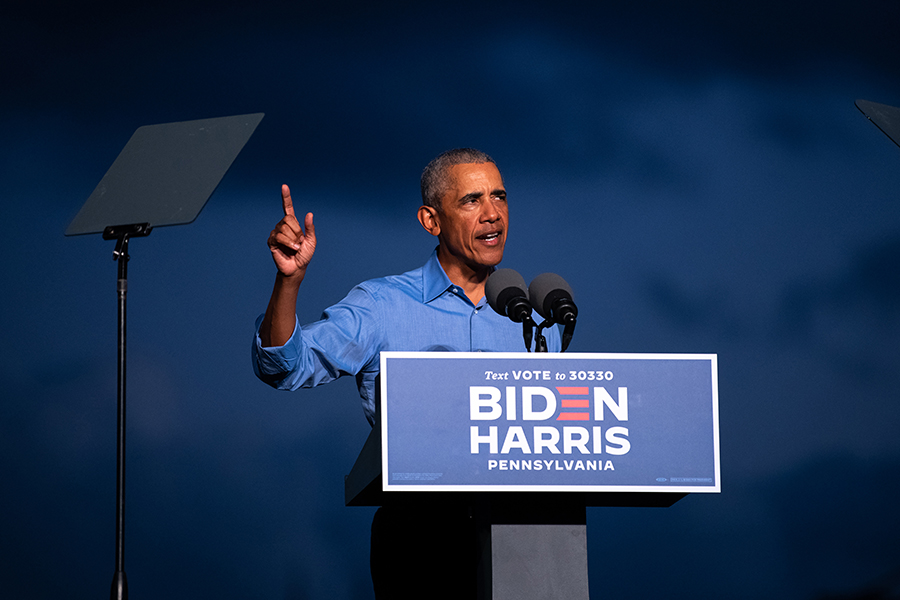 Former President Barack Obama made a fiery first in-person campaign appearance on behalf of Joe Biden in Philadelphia on Wednesday, ridiculing President Donald Trump for complaining about campaigning in Pennsylvania, contracting the coronavirus and hiding business dealings with China. “We know that he continues to do business with China because he has a secret Chinese bank account. How is that possible?” Obama asked supporters who had been invited to hear him speak at a drive-in rally in the parking lot of a Philadelphia sports complex. He was referring to a recent New York Times report that revealed previously unknown financial holdings of the president’s — at a time when Trump is criticizing Biden’s ties to the country. “Can you imagine if I had a secret Chinese bank account?” said the former president, wearing a blue shirt with the sleeves rolled up, his voice straining. “Can you imagine if I had a secret Chinese bank account when I was running for reelection?” He added, “They would’ve called me Beijing Barry.” It is “not a great idea to have a president who owes a bunch of money to people overseas,” Obama said, adding that he had probably paid more in income taxes working a high school job at an ice-cream parlor than what Trump paid during each of his first two years as president — $750. Obama’s long-anticipated speech, the first of several he intends to deliver on behalf of Biden and his running mate, Sen. Kamala Harris, over the next two weeks, represented a complete reversal of his reluctance to engage Trump directly. “By the way, his TV ratings are down,” the former president said. “So you know that upsets him. But the thing is, this is not a reality show. This is reality. And the rest of us have had to live with the consequences of him proving himself incapable of taking the job seriously.” Obama, who has helped raise millions for his former vice president online but has not appeared in person at campaign events during the coronavirus pandemic, slammed Trump’s failure to contain the outbreak in more personal terms than he has used before. “Eight months into this pandemic, cases are rising again across this country,” he said. “Donald Trump isn’t suddenly going to protect all of us. He can’t even take the basic steps to protect himself.” Obama, whose lofty campaign style masks a go-for-the-jugular instinct, seized on a Trump misstep Tuesday, when the president told supporters at a rally in western Pennsylvania that he would not have visited them if his campaign weren’t struggling. “The president spent some time in Erie last night and apparently he complained about having to travel here,” Obama said, laughing. “Then he cut the event short. Poor guy. I don’t feel that way. I love coming to Pennsylvania.” Obama is scheduled to hold his next event Saturday in Miami, followed by another rally in Orlando next week, according to a Democratic official with knowledge of his plans. Obama, who traveled to Philadelphia in August to deliver a televised speech at the virtual Democratic National Convention that cast the election as an existential battle for the future of American democracy, struck those same themes in his return visit Wednesday. He warned Democrats not to let up because of polls showing Biden with an edge and said that some had become “lazy” in 2016. “I don’t care about the polls,” he said, before referring to Hillary Clinton’s polling lead. “There were a whole bunch of polls last time. It didn’t work out. “We’ve got to out-hustle the other side,” he added, as the Democratic horns began to honk in unison.

Tweets by @forbes_india
Pope Francis, in a shift for Church, voices support for same-sex civil unions
Convergia: The upcoming dark horse in the Indian Ed-tech space