Opec nations agree on cutting output, but is the oil cartel still relevant?

The oil cartel's recent agreement to cut output may, at best, prevent a further fall in prices 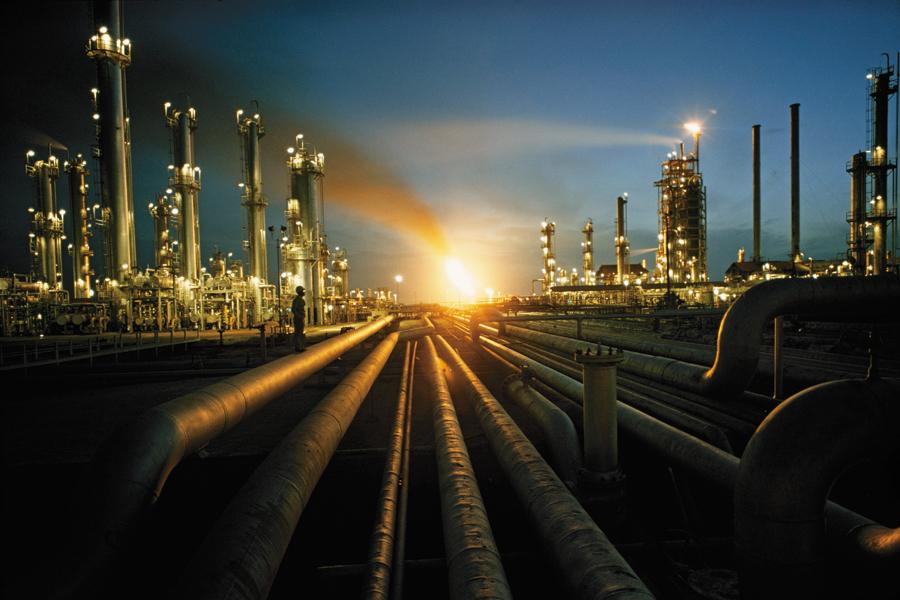 Image: Thomas J. Abercrombie / National Geographic / Getty Images
A final decision on the country-wise cuts in oil production will be taken by an Opec committee on November 30

On September 28, crude oil prices rose briefly by 5 percent before falling back to lower levels in the following days. The trigger for the increase was a surprise announcement by the Organisation of Petroleum Exporting Countries (Opec) that said that the 14-member cartel, at its meeting in Algiers, Algeria, had come to an agreement to cut output by anywhere between 200,000 barrels and 700,000 barrels a day to suck out the excess supply in the system and thereby boost prices. “Opec made an exceptional decision today,” says Iran’s oil minister Bijan Namdar Zanganeh. His Nigerian counterpart, Emmanuel Ibe Kachikwu, agrees, saying it was “a very positive deal”. How significant is this deal and will it lead to higher crude oil prices? More importantly, is Opec still relevant?

Many attribute the brief spike in prices to the fact that Opec members (comprising some bitter rivals like Iran and Saudi Arabia) had actually come to some sort of an agreement, the first in eight years. Such a consensus had eluded the cartel all these years even as oil prices crashed from a high of $120 per barrel levels in 2011-12 to a low of less than $30 last year (current prices are on the higher side of $40 a barrel) because Saudi Arabia chose to produce at will. The Kingdom, the world’s largest oil producer, was hoping that low prices would drive the US shale oil producers, an emerging threat to its dominance in the oil market, out of business. When other Opec members such as Nigeria, Angola and Venezuela, whose oil revenue-dependent economies are in dire straits on account of low prices, tried to broker a deal, Saudi Arabia insisted that Iran, a new entrant into the market after sanctions imposed by the global community were removed, too cut back its production. This scuttled the deal.

Saudi Arabia’s worsening economy (its budget deficit as a percentage of its GDP touched a record high of 15 percent last year) and tacit acceptance of the fact that the US shale oil producers have been resilient enough to survive the low prices (shale oil production, which peaked to 9.6 million barrel per day or mbpd in June 2015, has since dropped to just 8.5 mbpd in September 2016) forced it to change its mind. It agreed to cut its output, and surprisingly, even allowed Iran to ‘produce at maximum levels that make sense’.

But there is scepticism about the deal at two levels: Will the agreement be implemented in the first place, and if so, will it be effective? Opec has set up a committee to arrive at country-wise cuts in production and a final decision will be taken at its next meeting in Vienna on November 30. However, the fragility of the deal became clear within hours when Iraqi oil minister Jabar Ali al-Luaibi questioned the basis on which Opec estimates a member’s production and accused the cartel of underestimating his country’s output. Oil traders say it is too early to get excited and want to look at the details of the country-wise cuts. 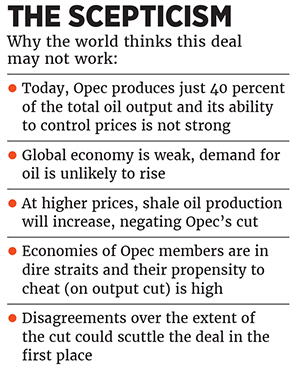 Even if Opec manages to seal the deal and its members stick to their reduced output levels (historically, cheating has been rampant within the group), it may not have much of an impact as 60 percent of the oil today is produced by non-Opec players. Russia, one such major player, has said it will maintain its current output for now. The US shale oil producers are smiling because as oil prices rise, their profitability will improve, which will reduce the stress their balance sheets have been subjected to. Their output will increase negating the effects of the proposed cut by Opec. “There is a combination of stabilisers that will thwart Opec’s attempts to boost prices. The global economy continues to be weak and oil offtake is expected to remain flat. Also, at higher prices, shale oil output will rise,” says DK Joshi, chief economist, Crisil. “At best, the deal, if implemented, may ensure that oil prices do not fall further.”

The Narendra Modi-led NDA government has been the biggest beneficiary of low oil prices. According to published data, the oil import bill in 2015-16 fell to $64 billion from $113 billion in 2014-15. The savings helped the government shore up its macroeconomic fundamentals, contain inflation, and set the stage for reduction in interest rates. If oil prices rise significantly, they would undo this progress. “The impact would depend on the extent to which oil prices rise. A price of up to $60 to $65 per barrel is easily digestible,” says Joshi.

In 2014, Harold Hamm, CEO of Continental Resources, a US oil producer, called Opec “a toothless tiger”. In the next few months, the world will know if it is indeed the case.

Tweets by @forbes_india
Hero Cycles will surprise its customers soon, says Pankaj Munjal
How Garmin mapped out a new direction with fitness wearables