How Garmin mapped out a new direction with fitness wearables

Smartphone navigation apps threatened to push Garmin off the road. To survive, it has shifted to wearables and relied on decades of manufacturing experience to catch up 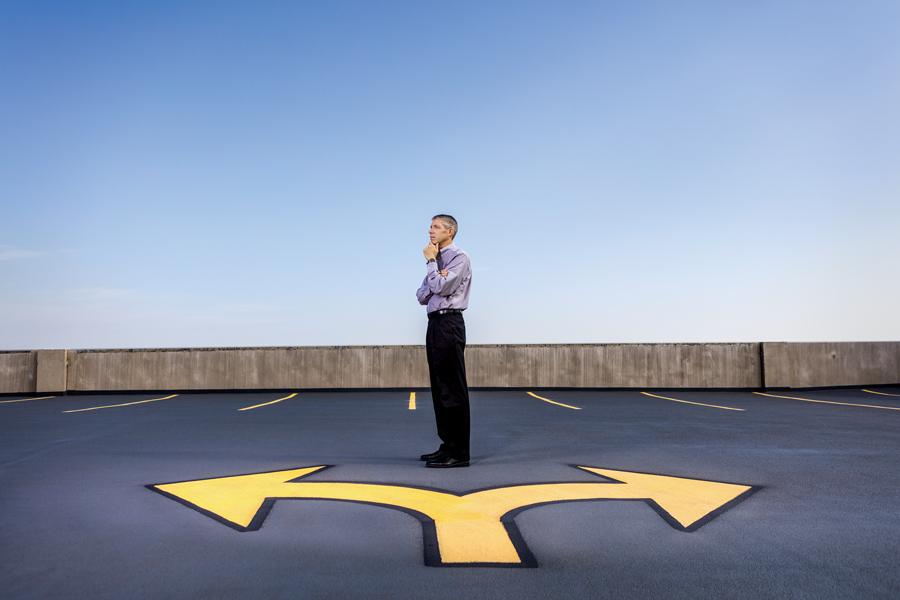 Image: Ryan Nicholson for Forbes
With Cliff Pemble driving Garmin in a new direction, the company’s stock has shot up by 33 percent in the past year (versus the Nasdaq’s 12.5 percent increase)

On most mornings, Cliff Pemble can be found jogging the tree-lined streets of suburban Kansas City. At 51, he can still move his lanky frame with impressive speed—clocking a sub-eight-minute mile. And as the CEO of Garmin, he has access to the latest gadgets that track his performance.

Circling a lake in a local park, Pemble runs with a green Garmin Forerunner 235 sports watch on one wrist and a black Garmin Vivosmart HR+ band on the other. The first monitors distance and pace; the second tracks his heart rate and steps. Pemble doesn’t listen to music on his runs, partly because he uses the period for “think time” and partly because of a painful lesson. “I got hit by a car once,” he says, pausing for a brief rest near the lake’s marina. “I learnt you have to be attentive.”

The irony is that his company suffered a similar blindsiding. Garmin pioneered the market for GPS devices for cars. At the company’s height it was generating $2.5 billion in sales—nearly three-quarters of Garmin’s total revenue—and pushed the stock to a peak of around $120 a share in October 2007. But just a few months earlier, in June, Apple had introduced a little device called the iPhone. Paired with the free Google Maps navigation app, the smartphone eliminated the need for a separate device. Sales of Garmin’s GPS units plummeted by almost $1 billion in three years, and the company lost almost 90 percent of its market value.

Pemble replaced Garmin’s billionaire co-founder Min Kao as CEO in 2013 as the company desperately searched for a different route. Low-priced integrated chips, which combine a processor, memory and connectivity, had suddenly made small, sensor-laden gadgets—wearables—much less expensive to make, and smaller companies like Fitbit and Jawbone had jumped to early leads in the market. Garmin joined the race, too, and decided to focus on selling slick, relatively expensive wearables to hardcore enthusiasts—abandoning the low end of the market to the startups. Garmin’s sales are growing again, and most of the increases are coming from wearables. The Garmin division that includes wearables and other handheld sports devices brought in an estimated $565 million last year from wearables, up eight-fold in two years. The stock, which traded as low as $15.17, is at a recent $49.08, up by 33 percent year-to-date.

Garmin originated in 1989 over dinner at a Red Lobster in Olathe, Kansas. Its co-founders, Min Kao and Gary Burrell, were frustrated that their employer, a unit of AlliedSignal, didn’t care much about GPS technology. So they struck out on their own, scraping together $4 million from savings accounts, family, friends and a few bankers. One of their first hires was a fellow math nerd named Clifton A Pemble, who designed some of Garmin’s earliest software. “I was there on day two,” he says.

Unlike competitors, Garmin outsourced nothing, making unfashionable vertical integration an early and key hallmark of its business. And despite an ill-timed IPO in 2000, Garmin survived when the dotcom bubble burst. Its sales reached $573 million in 2003, and Kao and Burrell made their debuts on The Forbes 400 with fortunes of $970 million and $810 million, respectively.

The same year, Garmin released its first wearable, the Forerunner 201, a pager-size, GPS-equipped running watch that cost exactly $160.70. Garmin followed it with several similar products, but its wearables business remained modest and dwarfed by the much larger automobile division. At the time, wearables were still quite expensive to manufacture and were powered by large chips that made the gadgets cumbersome and unattractive. And in the pre-smartphone era, customers didn’t really think much about—or demand—personal GPS-tracking technology. 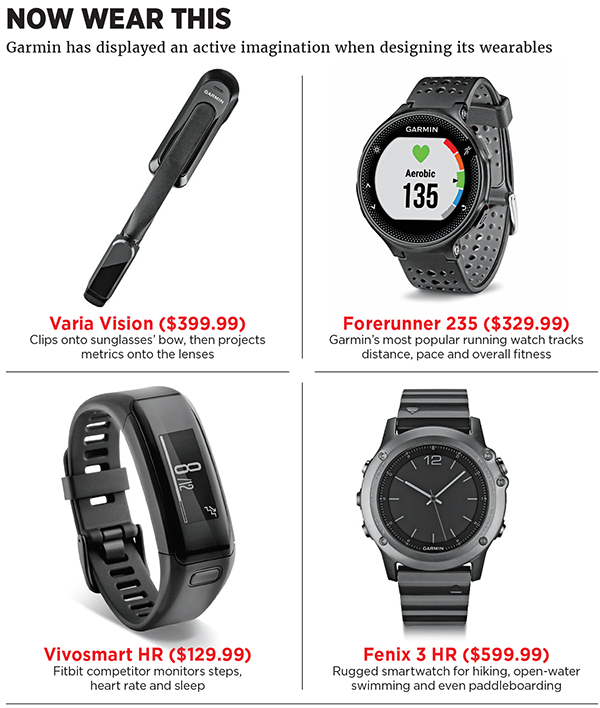 Yet, as soon as the iPhone began clobbering Garmin’s GPS sales, Pemble, then chief operating officer and top lieutenant to Kao—who had lasted past Burrell’s retirement in 2004—realised wearables might save the company from extinction. “We saw them as something that had some legs,” he says. The shift to wearables intensified after Pemble replaced Kao as chief executive in 2013, and Garmin accelerated to expand beyond running watches to specialised ones aimed at cyclists, runners, triathletes, swimmers, golfers and hikers.

Garmin sets high prices on these products and designs them thoughtfully. The $350 Approach S6, for instance, measures a golfer’s swing speed and maps more than 40,000 golf courses. The $450 Forerunner 735XT, aimed at triathletes, does the basics (distance, heart monitoring) and also measures your swimming strokes, cycling metrics and oxygen efficiency. “If you’re a hardcore runner, it’s not a tough decision to make. You’ll buy a Garmin,” says Oppenheimer analyst Andrew Uerkwitz. “There’s a loyalty that runners and hikers have for Garmin’s products, because they know they work.”

Many of its devices are waterproof (vital for swimmers and triathletes) and feature longer battery lives than comparable products. And all are made in one of Garmin’s three factories in Taiwan, part of its signature vertical integration. Garmin also maintains its own warehouses and call centres, and does all its marketing, design and engineering in-house. Pemble claims all this expensive overhead is an advantage, because it means that Garmin can shift production more quickly than companies like Apple and Fitbit that have to work within the calendars and capabilities of their partners. When Garmin’s goods are ready to hit the shelves, the company can count on “better relationships with distributors and end markets than anybody else,” analyst Uerkwitz says. To that end, Garmin works with everything from small hiking shops to large national retailers. Uerkwitz’s research shows Garmin consumers are the kind who talk to “the guy behind the counter.”

For a while Garmin let Silicon Valley rival Fitbit dominate the activity tracker segment. Trackers are lower priced and less complex than Garmin’s sports watches and intended for a different customer: The semi-sedentary couch potato concerned more about daily steps than their race pace. Fitbit launched its first activity-tracker band in 2009 and quickly became the leader in a market that also includes Microsoft and Jawbone.

After sitting on the sidelines, Garmin got in the game two years ago with its own activity trackers, the no-frills Vivofit ($99) and the slightly more sophisticated Vivosmart ($219). “We felt like we could bring something to the table,” Pemble says. “We could work a customer from the tracker all the way up through the higher end of running products.” By adding activity trackers, Garmin boosted its wearable shipments by 60 percent in 2015, according to market researcher IDC, as wearable revenue almost doubled.

To access fitness data, customers download the company’s Garmin Connect smartphone apps, which have become a surprise hit. Launched in 2011, the family of apps has more than 15 million users—a third of whom started using them in 2015 alone. Keeping with its do-it-yourself mantra, the company introduced its own app store, ConnectIQ, in 2014. That allows third-party developers to make apps for Garmin’s devices—a capability Fitbit doesn’t have yet. More than 2,000 apps have been developed for the platform so far, and more than 10 million apps have been downloaded.

“People get caught up with ‘Garmin is declining’,” Pemble says. “What people are missing is that we have growth engines.” As a man who took up running in middle age, he understands the importance of embracing new things. “The world is all about self-improvement these days.”

Tweets by @forbes_india
Opec nations agree on cutting output, but is the oil cartel still relevant?
How presidential is your playlist?