Painting a Picture of India in Transition 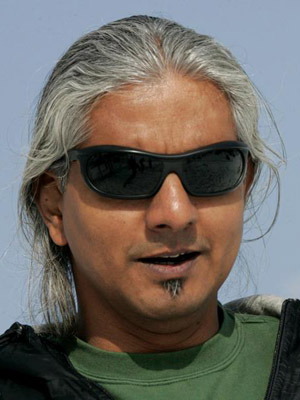 Among the myriad debates and discussions held at India’s inaugural Non-Fiction Festival in Mumbai, a session on ‘Communalism and the Social Fabric of India’ saw journalist-author Harish Nambiar read an excerpt from his new book Defragmenting India. The book is a chronicle of Nambiar’s journeys through the country in the aftermath of the 2002 Godhra riots. As he rides pillion on a bike from Gujarat to Odisha, he goes about discovering people’s experiences and documents their untold little tales.

Q. What was the idea of designing your book as a travelogue, rather than conforming to a conventional journalistic style?
A: I didn’t set out to write a book. I just landed up at a time where the riots burst. What I tried to do was get the data regarding the riots, running the theme of different communities along the route. My mission was not to ask people what they thought of the riots, because there is not much variety in terms of responses. It is exciting how each person, when you don’t mention the subject, responds or doesn’t respond to it—or even finds something else which is more important than the riots. This allowed me to build an entire picture of differences in India—it is a big animal.

Q. You had conversations with people which went beyond the riots. How did that help?
A: I was trying to paint a picture of India in transition. In 1991, the economic reforms had just begun. Ten years later, a state that had been economically at the top was bursting into riots, very costly riots. I went to states like Odisha, where very beautiful old temples were being broken down. And when I spoke to the people there, I discovered there was this mythological Kalapahad (Black Mountain). All destruction is attributed to him.

His character turns out to be very interesting. He’s regarded as a Muslim in public memory, but as it turns out, I discovered that Kalapahad is actually a [Hindu] Brahmin. He falls in love with a Muslim girl and to marry her, he converts to Islam. Because he converts, he isn’t allowed to visit temples that he went to when he was younger. He then goes and destroys them. These are the types of stories I want, and not just how many people were killed. I wanted to develop a picture of the country and how it is developing at various paces.

Q. From what you’ve witnessed in your journey, why do you think transition manifests itself through violence and destruction?
A: The primary reason is poverty. Whether it’s Harlem or London, the ones who riot generally tend to be people who don’t have much property to lose. Politicised youth is a very dangerous thing. It’s a powered keg—in cities, differences are right next door. The population is inextricably linked. You can’t decide, ‘this is a rich man’s section, this is a poor man’s section’. And when you’re that inextricably linked, whenever the fault lines crack, it’s going to spread through the system.

Tweets by @forbes_india
Nissan's Indian Gamble with Datsun
Is United Europe a Bad Idea for Britain?